We were up early yesterday morning, getting ready for our 140 mile trip back to Elkhart, Indiana. Since Terry put away a lot of stuff inside the motorhome the night before, we had time to do everything else that needed done at a leisurely pace.


Fisherman’s Landing in Muskegon, Michigan only has RV sites with water and electric, and a dump station. So once Terry had her loom stashed away in the back of the motorhome and our computers secured, and I had the water and electric disconnected, it didn’t take long to be ready to roll. We pulled out of our site and I stopped at the dump station to empty our holding tanks.

While I was doing that, Terry hooked our Ford Explorer to the Blue Ox tow bar, then went into the office to get back the $20 deposit we had to leave for the electronic key card to access the campground. The automatic gate was open for the entire week we were there because they were waiting for the parts to come in to repair it, but we still had to pay the deposit and keep the card with us, just in case they did get the part and fixed it, I guess.


We left Fisherman’s Landing at 10 AM and headed south on US Highway 31. Southbound traffic can be heavy on Sunday afternoon, but that early in the day there wasn’t much to deal with and we rolled right along. There were a couple of construction zones where we had to merge into a single lane, and even then we didn’t have the usual idiots who stayed in the disappearing lane waiting until the last minute to try to force their way into traffic.

We had about half a tank of fuel on board, so we stopped at a Pilot truck stop a few miles north of the Indiana state line to fill up. We only had a little over 35 miles to go to our destination at that point, but we will be sitting still for at least a week or two, and I always like to have a full tank when I arrive. That way if power goes out, as sometimes happens in campgrounds, we can run our generator as long as we need to. It’s just one of those tricks that fulltime RVers learn from experience. Kind of like always having half a tank of water on board, for the same reason. More than once we’ve been in a campground when somebody ran over a water bib and they had to shut the water down to repair it. It’s all part of that Boy Scout training – Be Prepared.


We arrived back at Elkhart Campground a little before 1 PM and parked in the same site we had been in for several weeks before we left, right next to the dog run. We timed it pretty well, because not long afterward it began to rain.

Once we were parked and hooked up and had the motorhome back in some semblance of order, we relaxed for a little bit. Then our stomachs started growling, so we went to King Wa for an early dinner. Another storm system came through while we were in the restaurant, with a lot of thunder and lightning. But by the time we were done with our meals it has passed on.

When we finished eating we went to WalMart to stock up on some things and then came back home. Terry did some laundry and I made reservations for fifteen weeks at Thousand Trails campgrounds in Florida, starting October 30. We’ll rotate between the Orlando preserve and Three Flags in Wildwood, moving every two to three weeks. That’s going to cost us a total of $263.06. A pretty good deal if you ask me.

Of course, like all fulltimers, our plans are written in Jello and we may shake it up at any time. But it’s nice to have the reservations in place, Florida can get busy in the wintertime.

Before I close today, I want to wish our friend John Huggins from Living the RV Dream a happy birthday. I hope you have a great day, John. We’re looking forward to seeing you and Kathy when we get back to Florida. 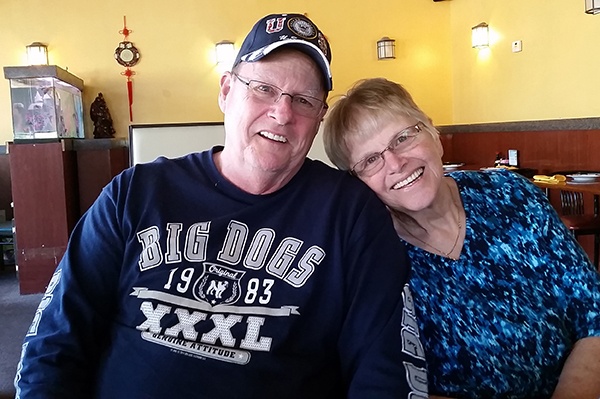 Congratulations, Ann Finley, winner of our drawing for an audiobook of Blood Honor, the debut novel in my friend Russell Blake’s The Day After Never post-apocalyptic trilogy. We had 63 entries this time around. Stay tuned, a new contest starts soon!

Thought For The Day – You are never too old to set another goal or to dream a new dream.

5 Responses to “An Easy Day”