Nick's Blog » The Stars Were All Aligned

I think yesterday was one of those days when the stars were all aligned just right or something. I need more days like that.


We had some orders to mail out, so in the early afternoon I went to the post office in Elkhart. When we were in Tuscaloosa, Alabama a couple of weeks ago Terry and I were laughing that whenever we went to see my son Travis and his wife Geli, we managed to catch each and every traffic light on the way there and on the way back to our campground. Not just once or twice, but on each trip for the entire week we were in town. Not so yesterday. Every light was green all the way downtown to the post office, and when I got there I found several empty parking spots right in front.

It is been my experience that usually when you go to the post office on a Monday you can expect a long line waiting to mail out packages and pick up things. But when I walked in, there was one other person at the counter and two clerks standing there waiting for the next customer, which was me. I was in and out in record time.


From there I drove to Jiffy Lube to get the oil changed in our Ford Explorer. Again, my timing must have been just right because I did not catch one red light all the way there. The place has three service bays and two of them were empty, so I pulled right in. I don’t think I was there more than about fifteen minutes before they came to tell me that they were finished. I can see why, since they had three guys on the job at the same time.

And then driving back to Elkhart Campground, it was the same thing. Not one red light all the way! I was tempted to stop and buy a lottery ticket! But why push my luck?

A little before 3 PM the weather alert on my phone went off saying that there was a strong, fast moving thunderstorm coming down from Michigan with large hail, strong winds, and heavy rain. It recommended going to an interior room until the storm had passed. I’m not sure which room in a motorhome is the “interior” room.

Sure enough, it was a strong storm and the rain pounded so hard on the roof of our Winnebago that it was hard to talk. The thunder boomed, the lightning crashed, the wind was blowing really hard, and in about ten minutes it was gone, just as quickly as it had come. The sky cleared and the sun beamed again. At 11 p.m. the news reported that trees were down all through the region, an eighteen wheeler had been blown over, and close to 30,000 homes in the area were still without power.

We were both in the mood for a cheeseburger, so we went to Culver’s for dinner. They are our favorite fast food restaurant in the entire country, and you can’t beat their Cheddar Butterburger. And once again, it seemed like luck was on my side. No traffic lights on the way there, when we walked in we didn’t have to wait in line, and the food was as delicious as always.


We were surprised to see a new shopping center next to the super WalMart that includes a Hibbit Sports, Shoe Carnival, Maurice’s, Pet Smart, Duncan Donuts, Ross, Panda Express, and several other stores. Quite a change from we saw here two years ago.

Back at the campground, we had a note on our door telling us that longtime subscribers Cliff and Bell Atwater, from Bay City, Michigan had arrived. Cliff has a little company called Cliff’s Custom Crafts, and among the many nifty items he makes are Dandy Dusters. Measuring over eight inches long and made of static free hog bristles, mounted in a beautiful wood handle, they are perfect for cleaning everything from computer keyboards to musical instruments, fans, air conditioner vents, and lots more around the home or RV. 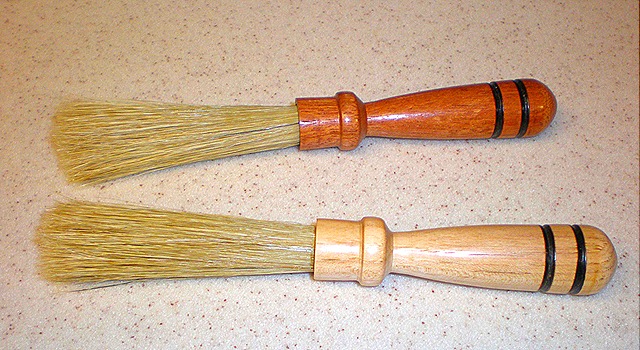 I keep one with a handsome Brazilian cherry handle in my desk drawer to clean up after myself, and Miss Terry’s is a light oak, and also gets a lot of use. You can find out more by e-mailing Cliff at cliffscrafts@chartermi.net.

It’s always nice to put faces with the names on a mailing list, so we walked down to their Class C motorhome and visited with Cliff and Bell for a while. This afternoon we’re going to have dinner together, which we are looking forward to.

Thought For The Day – I cannot give you the secret to success, but I can give you the formula for failure – try to please everybody.

One Response to “The Stars Were All Aligned”