Note: We find some of our best stories wandering around in old cemeteries. This one, which appeared in the May-June 2013 issue of the Gypsy Journal, began with a visit to the Cedar Hill Cemetery in Vicksburg, Mississippi.


Animal mascots have been an important part of military life for centuries. Mascots became symbols of loyalty and courage and provided lonesome soldiers far from home something to care about. During the Civil War it was not uncommon for both Union and Confederate units to take their mascots with them as they marched into battle. Dogs and horses were the most common mascots, but there were others, including birds, goats, and even a bear!

Company C of the 8th Regiment Wisconsin Volunteers had Old Abe, a beloved bald eagle that somebody had raised by hand. During battle, Abe would fly over the Confederate lines, screeching at the enemy. More than one Rebel ball was fired in his direction, but the eagle managed to dodge them all and come home from the war unscathed.

Not so fortunate was a Staffordshire Bull Terrier named Sallie, who was the mascot for the 11th Pennsylvania Volunteer Infantry. Sallie was killed at the Battle of Hatcher’s Run in Virginia, and is memorialized on the unit’s monument at Gettysburg.


But the Union forces weren’t the only ones with mascots. The Confederate 3rd Louisiana CSA had a donkey that would occasionally sneak into their commander’s tent and try to sleep with him, providing lots of entertainment to the troops under his command.

And then there was Douglas, the camel who was the mascot of Company A, of the 43rd Mississippi Infantry. Douglas was introduced to military life as part of an experiment by Jefferson Davis, who served as the United States Secretary of War before the South seceded. As American interests expanded in the Southwest, it was found that horses and mules were unsuited to the harsh climate of the desert, and Davis decided that camels would make excellent pack animals. 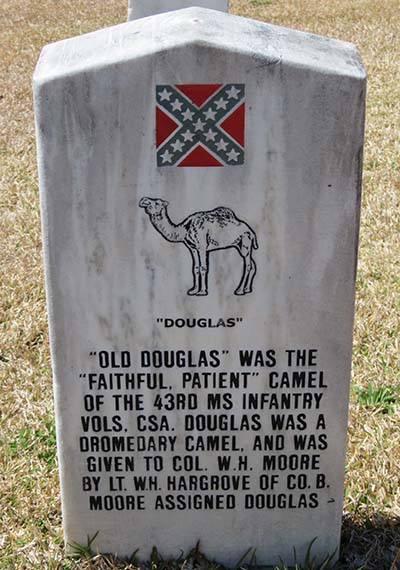 In 1855, Davis acquired a number of camels which were shipped to Galveston, Texas and then transported overland to Arizona. Camels may have been better capable of handling life in the desert, but it turned out that American soldiers weren’t capable of handling camels, and the experiment failed. Most of the camels were simply turned loose to fend for themselves and eventually died off. But a few somehow ended up on farms in the South, where Davis thought they might replace mules and oxen.


It is unclear exactly how the 43rd Mississippi acquired Douglas, but once they did, he quickly made his mark in the unit, his appearance spooking the regimental horses and causing a stampede. Camels are by nature cantankerous animals, and Douglas was no exception, but still the men of the 43rd came to love their odd mascot. Possibly simply because he was so odd. The unit quickly earned the nickname of the “Camel Regiment.”

Douglas was assigned to the regimental band, carrying musical equipment and supplies, and was with the unit at the Battle of Corinth in Mississippi. When they were assigned to Vicksburg, the camel made quite a sight walking down the city’s streets, where most people had never seen such a creature.

Unfortunately, during the long siege that eventually resulted in Vicksburg falling to Union forces under General Ulysses S. Grant, Douglas was killed by an enemy sharpshooter. And to add insult to injury, the starving men of the 43rd ate him! Of course, by that time both soldiers and civilians inside the beleaguered city were already eating dogs, cats, and rats, just to survive. 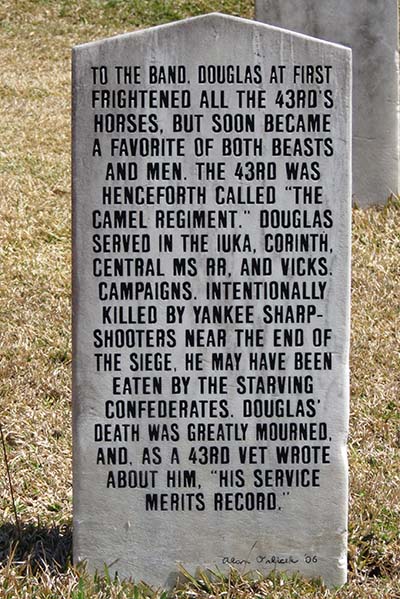 But the 43rd Mississippi never forgot their unique mascot, and today a tombstone at Cedar Hill Cemetery in Vicksburg honors Douglas in a section reserved for fallen Confederate soldiers, just one more reminder that war is hell for men and animals alike.

Congratulations Robert Graf, winner of our drawing for an audiobook of Big Lake Lynching, the second book in my Big Lake mystery series. We had 137 entries this time around. Stay tuned, a new contest starts soon.

Thought For The Day – There is a reason the rear view mirror is so small and the windshield is so big. Where you are going is more important than where you have been.