Yesterday was another stay at home day for us. We started the day with some more of Miss Terry’s delicious made from scratch brown butter yeasted waffles, and they were fantastic. I was never a waffle man before, my taste ranging more towards French toast, until the first time Terry made me waffles. But there’s a big difference between hers and Eggos!


Sometime around noon a FedEx van pulled up out in front of our motorhome and the deliveryman brought this beautiful bouquet of roses to the door, a Mother’s Day gift to Terry from my son Travis and his wife Geli in Tuscaloosa, Alabama. My photo doesn’t do them justice, and the gesture really touched Terry’s heart. 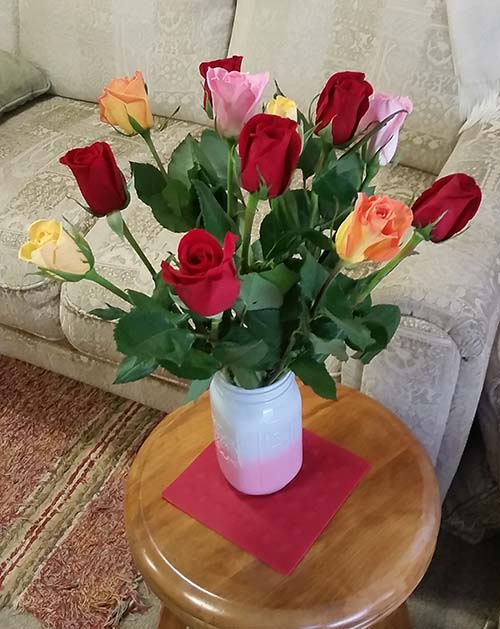 I spent some time checking e-mails and answering several of them that needed attention. One was from a woman who said that the hardest part of adapting to the RV lifestyle for her and her husband has been a lack of privacy. Not privacy from the neighbors in the sometimes close quarters of an RV park, but privacy from each other. She said neither one of them liked having the other being able to see what they were doing on the Internet, not that they were doing anything they shouldn’t, but it was just something that neither was comfortable with. She added that another problem was telephone calls. When one of them gets a phone call they have to go into the bedroom and close the door to have some privacy. She asked me how Terry and I handle that. I didn’t know how to respond to that question because it’s never been an issue with us. Neither of us have ever felt the need to hide what we were doing from the other.


Once I was done with e-mail, I went back to work on my newest novel, Return to Dog’s Run. By the end of the day I had a little over 6,000 more words under my belt. I’m closing in on the halfway point and it’s really rolling along.

Meanwhile, Terry was busy winding yarn onto her warping board and sleying the reed for another weaving project. She tells me she’s taking a break from the scarves and shawls and making towels this time around. Whatever comes off her loom, I know it’s going to be beautiful.

Speaking of books, my friend Ken Rossignol tells me that the boxed set of Six Killer Thrillers, books 1 through 6 of his Marsha and Danny Jones thriller series, is free today on Amazon. The series takes you onboard the world’s most unusual cruise ship, the Sea Empress, and once you read it you will never think about cruise travel the same way again.


Congratulations Kathy Brophey, winner of our drawing for an audiobook of Swan Song, the second book in my friend Lee Hanson’s popular Julie O’Hara Mystery series. We had 76 entries this time around. Stay tuned, a new contest stars soon.

Thought For The Day – Never tell people how to do things. Tell them what to do and they will surprise you with their ingenuity. – George S. Patton

One Response to “The Halfway Point”