I couldn’t help but chuckle when friends who are on an RV trip to Alaska reported that Canadian inspectors at the border crossing found some undeclared booze they had hidden in their motorhome and confiscated it. Not because of their misadventure and the 4+ hours they spent getting their RV torn apart, but that anybody thinks they are smart enough to get away with it in the first place.


I have had friends that worked at a border station and it’s amazing how many people think they can hide anything from them. You may think you’ve come up with a clever place to try to hide something that nobody would ever think of, but spare yourself the hassle and don’t even try! This is what they do for a living every day. Trust me, there’s nothing you can think of that they have not seen before.

A couple of flatlanders who plan to take trips out west this summer have been asking me about the best routes and what to expect in the ways of mountains. Two great resources are Mountain Directory West and Mountain Directory East. I did not see them on Amazon except by secondary sellers, but I think you can get them at Camping World or directly from the publisher at http://www.mountaindirectory.com/. They are also available as e-books and as apps for both iPhones and Androids.

A free online resource to check out is Flattest Route. You just enter your starting point and the destination and it will show you how steep the different roads are along the way.


On a not so fun note, I’m still dealing with the ineptness of the hospital in Temecula, California where I spent four days back in November. When they sent out the bills to the VA for my care (or lack thereof), they put down some oddball number, a series of numbers and letters, as my Social Security number. It turns out it was my patient number at Temecula.The VA uses vets’ Social Security numbers to identify them. So the VA kicked it back to Temecula, and they apparently sent them the same thing a second time. Long story short, after repeated phone calls to Temecula on my part, they finally sent the corrected bills to the VA. But by then it was well after the 90 days the VA allows for submission of outside medical bills, so they refused to pay. So now it looks like I have to come up with many thousands of dollars to pay them.

Somebody said it was “typical VA crap” but that’s not the case at all. Everything that got screwed up along the way, from the poor treatment I received while in the hospital to them failing to send my medical records to the VA, and on to this latest debacle, falls entirely on Temecula Valley Hospital.


Be sure to enter our latest Free Drawing. This week’s prize is an audiobook of Rabbits Never Die, the second book in my friend Steven Thomas’ Gretch Bayonne action adventure series. To enter, all you have to do is click on this Free Drawing link or the tab at the top of this page and enter your name in the comments section at the bottom of that page (not this one). Only one entry per person per drawing please, and you must enter with your real name. To prevent spam or multiple entries, the names of cartoon or movie characters are not allowed. The winner will be drawn Sunday evening. 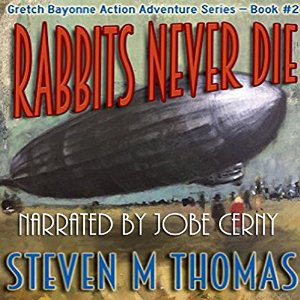 Thought For The Day – Sometimes I have to remind myself that it’s not worth the jail time.