Nick's Blog » Did I Speak Too Soon?

I wrote in yesterday’s blog that ever since I applied the “hammer treatment” to our motorhome’s inverter it been working fine and we had not had any more power blips. Then, sometime after 3:30 in the morning the warning beeper on the battery backup power supply I use for my computer woke me up.


I figured I had indeed jinxed myself by talking about the inverter, but a glance at the digital readout for our Progressive Industries electrical management system (EMS) showed that there was no power at all coming into the motorhome. Even with all the problems we had been having with the inverter, we had not lost the main power. The basement air-conditioner had still worked, as did the washer/dryer combo. The only things that had been affected were the circuits powered by the inverter. So this meant that there was another problem.

Since our residential refrigerator is powered by a second, dedicated pure sine wave inverter that feeds directly from our battery bank, I wasn’t worried enough to want to go outside and check things out in the dark, so I went back to bed instead. In the morning when I went outside to our power pedestal, I discovered that the breaker was turned off.

At first I assumed it had flipped on its own, until I noticed that the motorhome parked in the site behind us, which should have been plugged into the pedestal that backed up to ours, had its power bay door open and the electrical cord was unplugged and lying beside it. About then the owner of the rig came out and said that sometime around 3 or 3:30 AM he had heard loud chattering come from his transfer switch and went outside and started flipping things trying to turn it off. He said he didn’t think he had flipped our breaker, but maybe he did because he was confused. At any rate, once I reset the breaker everything was back to normal again.


Someone made a comment in yesterday’s blog that merely hitting the inverter with a hammer was not going to be a permanent fix. I know that and I know that we will have to pull the inverter and replace it if we can’t figure out what the problem is. But it’s working for now and I don’t want to crawl around on the wet grass and dirt doing that if I can postpone it for a while. If there’s one thing my buddy Greg White has taught me over the years, it’s that there’s no reason to do a job today if you can put it off until next week.

It was a stormy day here on the Florida coast so we didn’t go out. Terry made delicious waffles from scratch for breakfast and then spent much of the day catching up on bookkeeping while I wrote another 4,000+ words in my new book. For dinner she made excellent pork loin chops and wild rice for me, and with Spanish rice for her that was chock full of veggies. The weather is supposed to clear up today and be nice for the next few days, and cooler than it has been, so we’re going to get out and do some running around. There’s so much to see and do here that it would be a shame to spend our time cooped up inside.


It’s Thursday and that means it’s time for a new Free Drawing. This week’s prize is an audiobook of Swan Song, the second book in my friend Lee Hanson’s popular Julie O’Hara Mystery Series. To enter, all you have to do is click on this Free Drawing link or the tab at the top of this page and enter your name in the comments section at the bottom of that page (not this one). Only one entry per person per drawing please, and you must enter with your real name. To prevent spam or multiple entries, the names of cartoon or movie characters are not allowed. The winner will be drawn Sunday evening. 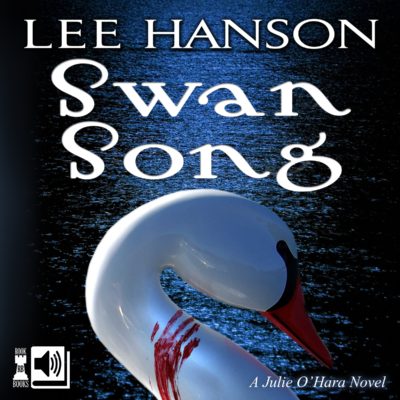 Thought For The Day – They say money talks, but mine just waves goodbye.

4 Responses to “Did I Speak Too Soon?”