Yesterday was a busy day, much of it spent in Frustration City. You know that place, right? It’s where all of the bureaucrats and idiots of the world work. And I talked to a bunch of them!


I get my medical care through the Veterans Administration (VA) Health System, and my primary care provider is at the VA hospital in Tucson, Arizona. When I was taken to the emergency room at Temecula Valley Hospital in California back in November and then admitted for several days, I gave them the information they needed to bill the VA for my stay there.

Since then I have received several bills, all of which say that they have billed the VA and are awaiting payment. Then yesterday, I received several final notices threatening collection. So I spent hours on the telephone, much of it on hold, trying to get things straightened out. As it turns out, there isn’t just one billing office you have to talk to. That would be way too easy. Instead, one office handles the emergency room doctors’ bill, one handles the doctors who treated me in the hospital once I was admitted, another handles the lab billing, and yet another handles the radiology. Yet, I have the same account number for all four. As it turns out, none of them got paid because they all made the same mistake.


Instead of including my Social Security number with the bills, which the VA told them they needed and which they had, they gave them my five digit patient number assigned by the hospital. No wonder the VA told them all they needed further information before they could pay the invoices! Two of the different people I talked to in the billing offices said they were surprised that I had a five digit Social Security number instead of the normal nine numbers like everybody else. Well, duh! But instead of trying to figure things out with the VA, or calling me, they just sent nasty letters blaming me for their ineptness.

Let me stress, this is NOT due to any failure on the part of the VA, it’s because of the California hospital. With no Social Security number, the bill could be for anybody with the same name.

Eventually they gave me a 90 day extension while they figure it all out and resubmit the billing to the VA. However, the VA says bills must be submitted within 60 days of when the care was provided, which was in mid-November. So who knows how that will work out? I still have never received a bill with the charges itemized, and they still have never sent the VA my records or radiology images, which they were supposed to do way back in November!

Once I was done with all of that I formatted the print edition of Big Lake Brewpub and gave my cover artist, Elizabeth Mackey, a heads up that I will need the back cover formatted so I can submit it to Create Space, the print division of Amazon.

Then I wrote 2,000 words in my work in progress, Return to Dog’s Run. My goal this year, besides the writing I do for the blog and the Gypsy Journal, was to write 1,000 words a day in my books. Since my writing schedule varies, depending on how lazy I am and how many other things are going on, I may be ahead of or behind that goal at any given time. So far, today is the 96th day of the year and I’m just under 82,000 words for the year, which means I’m 14,000 words behind schedule. I’m not worried about that because on a good day I can knock out 6,000 words or more, and 2,000 to 3,000 word days are a piece of cake


Speaking of Amazon and books, though I’ve never received one, I know a lot of folks get an e-mail from Amazon with suggested books. Look what was at the top of the list one of my readers, Jenise Harper, received yesterday! How cool is that? 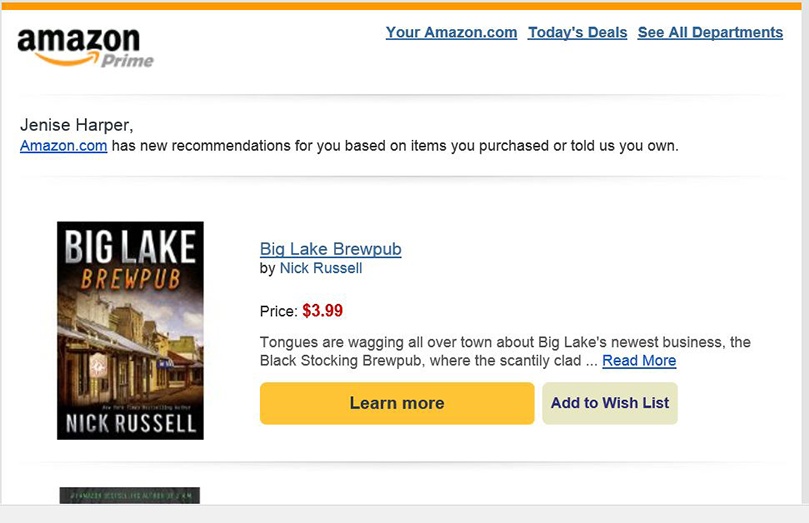 Miss Terry was just as busy as I was, if not more so. She spent the day catching up on her bookwork, doing laundry, making dinner, and researching computers online. Her old Toshiba laptop, which she has been using for bookkeeping for close to eight years, moves at the speed of sludge and is causing her constant problems and needs to be replaced. I’m not sure if she’s reached a decision on anything yet, but I’ll be glad when she does. Working with that clunky old thing is its own version of Frustration City.

Thought For the Day – My winter fat is finally gone. Now I have spring rolls.