Our search for a winter nesting spot and possible retirement place if we ever hang up the keys is basically a process of elimination. While we haven’t found “the place” that is right for us yet, we have crossed several possibilities off the list.


After our most recent day trip we have now ruled out all of the Gulf Coast north of Tampa to the Big Bend where the Panhandle begins. We’ve looked at all the small towns from Cedar Key to Dunedin and just haven’t found what we’re looking for.

Yesterday we explored the area around Hudson, New Port Richey, and further south. Traffic on US Highway 19, the main north-south route, is heavy and there was a lot of road construction going on, making it no fun to drive on. And the few beaches we were able to find were narrow to nonexistent.

About the best beach we found was at Honeymoon Island State Park, and while the park’s website makes it look attractive, it’s actually a very narrow strip of sand, and even on a weekday there were a lot of people. There’s no way we’d have enough room to fly our Revolution kites there. 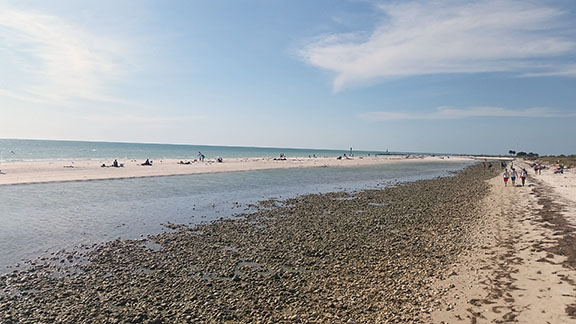 The other day somebody on Facebook said that there’s more to life than kite flying and I promptly unfriended them. I just don’t need that kind of negativity in my life.


The tide was on its way out and I managed to take a couple of pictures with my phone, but the sun was reflecting off the back screen and it wasn’t until we got home that I realized I had captured this seagull flying by. 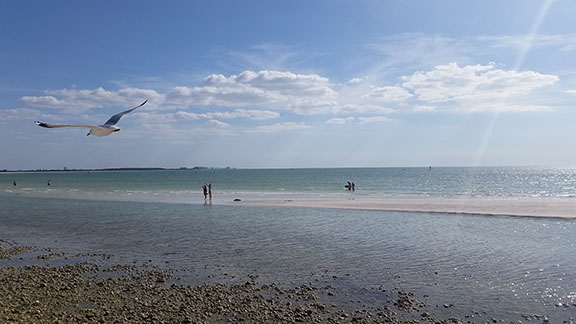 Wanting a quicker route home than fighting all of the traffic on US 19 again, we crossed over to Interstate 75, which was faster but had even more traffic. It was about 6 o’clock when we got back to Wildwood and I didn’t think Miss Terry should have to cook after a busy day like that, so we went to Beef O’Brady’s for dinner. We have become a fan of this small restaurant chain, and have eaten at several of their locations in Florida and other places.

I think today will be another day out, doing some more exploring. Bike Week is going on in Daytona, which is just north of New Smyrna Beach, our favorite location so far. There are thousands of bikers over there and I know traffic is going to be terrible, so I don’t think we’ll go that far. But we may explore some of the communities a half hour or so East, like DeLand and Deltona. That’s about as far from the beaches as we’re willing to settle for.


The good news is that even when we strike out and cross another area off of our list, we still have a lot of fun just being together and seeing new places. It’s nice to be married to your best friend!

Thought For The Day – I’m working on earning my second million dollars. I finally gave up on the first one.

8 Responses to “Process Of Elimination”