I had pretty much been chained to my desk for three days getting my new Big Lake mystery novel done. And even though I wanted to finish the read-through before I handed it off to Miss Terry so she could start editing and proofing it, we both really needed a day off. So yesterday we played hooky.


In the morning I worked on the book for a while, and then we went to look at a mobile home for sale on a decent sized lot on a canal in Inverness. It was kind of cool because it had its own dock, and one can follow the canal out into a chain of lakes that eventually lead to the Gulf of Mexico. It was an older mobile home and the price wasn’t bad, but again, it’s not where we want to be. If we could pick up the lot and canals and move them to the other side of the state near New Smyrna Beach or Saint Augustine, it would be perfect. But as it turns out, you can’t cut and paste in real life.

I had lost one of the chrome looking plastic lug nut covers on one of our motorhome’s dual wheels and was looking for replacement so we stopped at the 75 Chrome Shop at the Wildwood exit off of I-75, a mile or so from Three Flags RV Resort. I think this place has more trucker bling than anywhere we’ve ever been.


As I recall, the last time I had to order one of these lug nut covers from Spartan it cost five or six dollars, but they were only 99 cents at the Chrome Shop. They’re not an exact match for the ones I have, but they were close enough. And at that price, I bought a couple of extras. 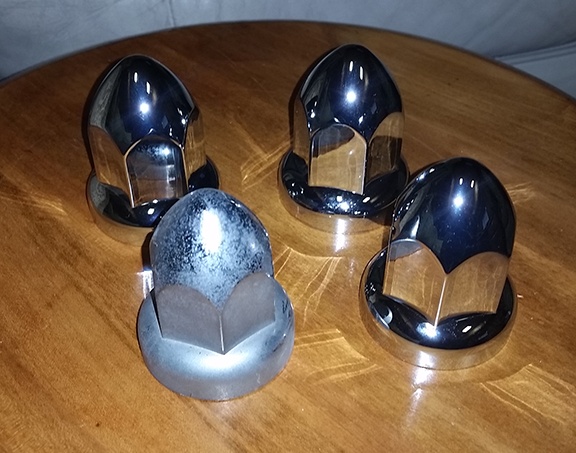 Twice now I’ve also lost one of the big deep dish hubcaps from my dual wheels, which set me back somewhere around $100 with shipping when I ordered replacements from Spartan. A while back someone had suggested I could probably find them at a truck stop for a lot less, so while we were there I asked the helpful young lady behind the counter about them. As it turns out, a stainless steel replacement was $46 and the chrome like we have is $26. That’s a heck of a savings!

Terry has been wanting to stop at the Traditions Antique Mall in Wildwood, which is almost across the street from Russell Stover Candies, so when we were done at the Chrome Shop that’s what we did. This place is huge! If it’s not the largest antique mall we’ve ever been in, it’s pretty darn close. We spent a couple of hours wandering around downstairs and probably didn’t see half of what they had on display, then we went up on the balcony and looked around there for a little bit. Terry said anytime I wanted to get rid of her for a few hours I could just drop her off there and go take a nap or whatever. 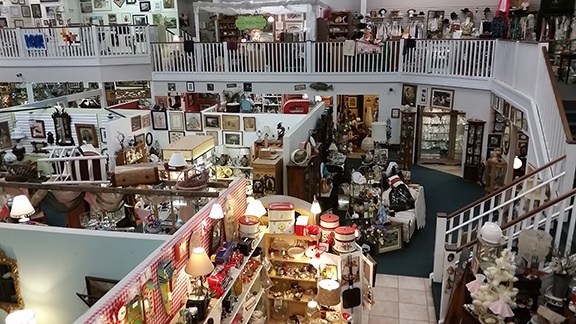 There’s another antique mall in Wildwood in a strip shopping mall on US 301 and we decided to stop there, too. The sign on the door said they closed at 5 PM, and we got there about 4:20. There were several other shoppers in the store, but at 4:30 they announced that the store was closing at 5 and telling customers to bring their purchases up to check out. Five minutes later they started flipping the lights on and off and saying that it was time to leave. Huh? A full half hour before closing time they’re ushering people out the door?


As we were leaving, the woman behind the counter told us they would be open again today and we were welcome to come back then. Terry said, “No thanks, I have no reason to come back here.” We’ve both been in business for a long time, both retail and service businesses, and we know how hard it is to get customers in the door and to keep them happy so they’ll come back again. I guess it’s a lesson these folks still need to learn.

We were enjoying our day off, so we decided to drive up to Ocala, where we hit a couple of stores and then had dinner at Ocean Buffet. This was the second time we’ve eaten at this nice Chinese restaurant, and we’d both go back at any opportunity. They have a very impressive selection to choose from, and everything is fresh, hot, and delicious.

Back at home I got back to work on the new book, checking it out for any glaring errors that needed attention before I give it to Terry to start doing her thing. That will begin sometime tomorrow. Our day off won’t delay the release of the book and we both really needed it. Okay, time to put the nose back to the grindstone.

Congratulations Jill Baum, winner of our Free Drawing for the first two audiobooks in Carol Ann Newsome’s excellent Dog Park mystery series, A Shot in the Bark and Drool Baby. We had 107 entries this time around. Stay tuned, a new contest starts soon!

Thought For The Day – Remember that silence is sometimes the best answer.