Note: This story first appeared in the September-October, 2008 issue of the Gypsy Journal.

Located just off Interstate 57 in central Illinois, the charming and friendly community of Arcola was one of those rare gems we love to discover. A place where hippies, rag dolls, and Amish buggies are all part of the landscape


The small community’s historic downtown features a brick lined street and stately buildings housing unique shops where you can shop for arts and crafts, antiques, and hand crafted Amish furniture. The area is home to Illinois’ largest Old Order Amish settlement, and the Amish Interpretive Center downtown offers visitors the opportunity to learn about the Amish culture and their simple lifestyle. The Interpretive Center also provides guided tours of the local Amish community and can arrange meals in an Amish home.

Settled in the mid-1800s, Arcola was a major producer of locally grown broom corn, with nearly half of the broomcorn grown in the United States coming from the Arcola area. The town is proud of its title of Broom Corn Capital of the World, and every year the Broom Corn Festival, held the weekend after Labor Day, features broom activities, arts and crafts, street vendors, free entertainment, great food, and a parade.

John Barton Gruelle was born in Arcola in 1880 and went on to fame as a nationally syndicated newspaper artist and illustrator. While his artwork covered the spectrum of American life and events, his comics, published under the name Johnny Gruelle, were probably his greatest achievement. His most famous characters were the whimsical Raggedy Ann and Andy. 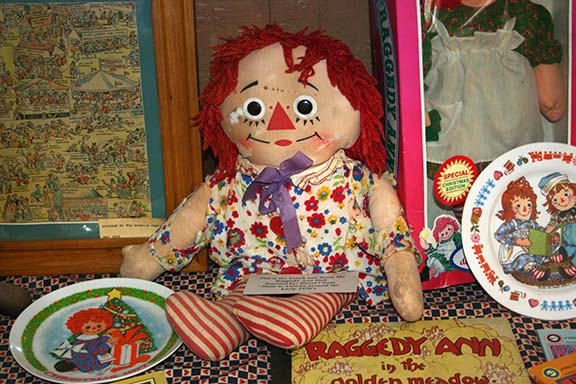 
Gruelle’s legacy is kept alive at the Johnny Gruelle Raggedy Ann & Andy Museum, which is housed in Arcola’s Visitor Center, located at 110 East Main Street. The small museum is the only officially licensed Raggedy Ann and Andy museum in the world, and its mission is to preserve the life and times of the man who created the storybook characters, and to promote the inspiration, values, and spirit of imagination that has made them an American institution for so many years. The museum displays a large collection of rare Raggedy Ann & Andy memorabilia, including precious family paintings and dolls. The museum is open Tuesday through Saturday from 10 a.m. to 4:30 p.m. Every year, the Original Raggedy Ann & Andy Festival brings collectors from all over the world to Arcola.

The Visitor Center, housed in the former railroad depot, also houses the largest collection of antique brooms and brushes in the United States, to honor the broom corn industry. Here you will see everything from tiny brooms and brushes suitable for dollhouses, to a giant broom that is taller than most visitors. 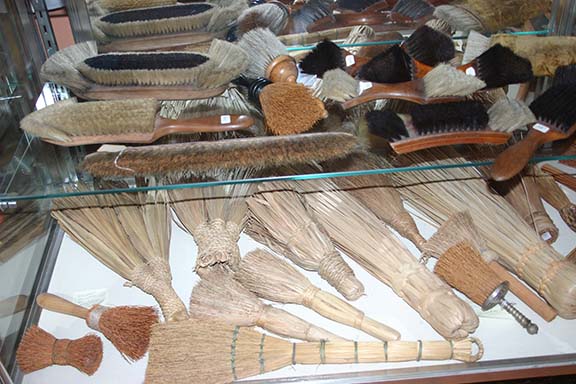 There probably aren’t many hippies to be found in town but Arcola’s Hippie Memorial, located next to the Visitor Center, is an interesting work of folk art. Created by the late Bob Moomaw, the 62 foot long memorial represents three stages of Moomaw’s life, one foot for every year. The memorial’s first 26 feet represent major events in Moomaw’s young life, including the Great Depression, World War II, and the 1950s, which some saw as a time of innocence but Moomaw considered one of great hypocrisy. The monument’s middle section is higher and incorporates more color, representing the rise of the hippie movement and their dissent from society’s norms. In the last section, Moomaw wanted to illustrate what he saw as the small mindedness of the 1980s, so he used rusted scrap metal to show his disdain. 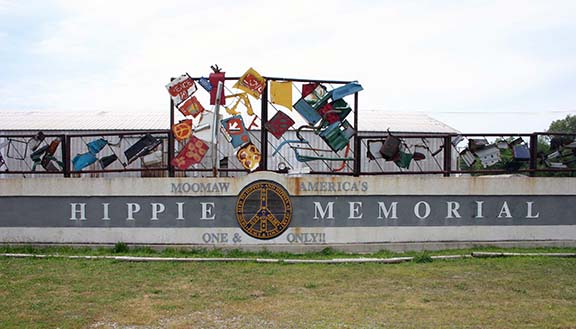 Interestingly, Bob Moomaw was never a hippie himself, though he was indeed a free spirit. He worked for the railroad and as the local tax assessor, and loved annoying his fellow citizens by painting slogans and messages on a building he owned downtown, such as “America you’re turning into a nation of minimum-wage hamburger flippers. Rebel. Think for yourself. It works!”

Still, Moomaw respected the spirit of the hippies. He said they changed our society for the good, and that because of them, he did not have to conform anymore. He admired their love of adventure, perhaps because he felt he lacked it in his own life. “My life has been the opposite of an adventure, it’s been one long dental appointment broken up by episodes of nothing happening,” he wrote toward the end of his life.


Moomaw had started the monument before he died of a heart attack in 1998, and his friends finished the project in his memory. You may not have been a hippy, or even liked hippies back in their day, but the world’s only hippie memorial is still an interesting social statement, and well worth a visit. 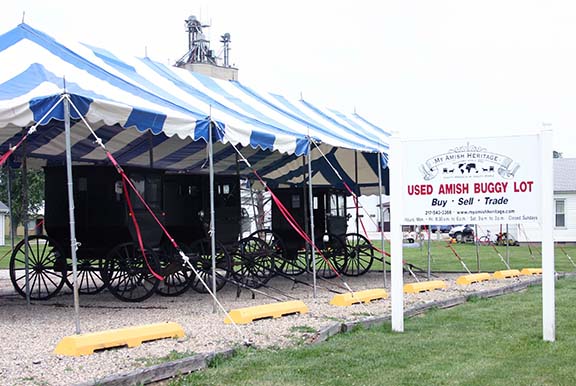 Another popular pastime is just cruising along the local back roads, past tidy Amish farms and schools, and some of the prettiest rural country in the Midwest. Whatever you enjoy, you’ll find it in awesome Arcola!

Thought For The Day – If you put your dreams on hold for too long, they might get tired of waiting and hang up on you.