Note: This story was in the March-April, 2011 issue of the Gypsy Journal.

You’ve been to Cadillac Ranch in Amarillo, Texas. You may have even been to Carhenge, near Alliance, Nebraska. But have you ever been to Florida’s Airstream Ranch?


Situated on the south side of Interstate 4 in Dover, Florida, along with all of the billboards and fast food joints that dot the landscape, we discovered eight shiny aluminum Airstream travel trailers buried nose down, just like Amarillo’s vintage Cadillacs.

Indeed, Frank Bates, who created this unique art project and owns the nearby Bates RV, which sells, what else, Airstreams, imitated Cadillac Ranch, right down to the slant of the buried objects, which match the angles of the Great Pyramid of Giza.


Bates created Airstream Ranch in 2007 to honor Airstream’s 75th anniversary, and originally had planned to use new trailers in the display. But downturns in the economy changed all that, and instead, he bought some junk trailers from a local scrap yard, and added two others that were sitting on his back lot. The trailers range from 1957 to 1994 vintage, and are 16 to 34 feet long. 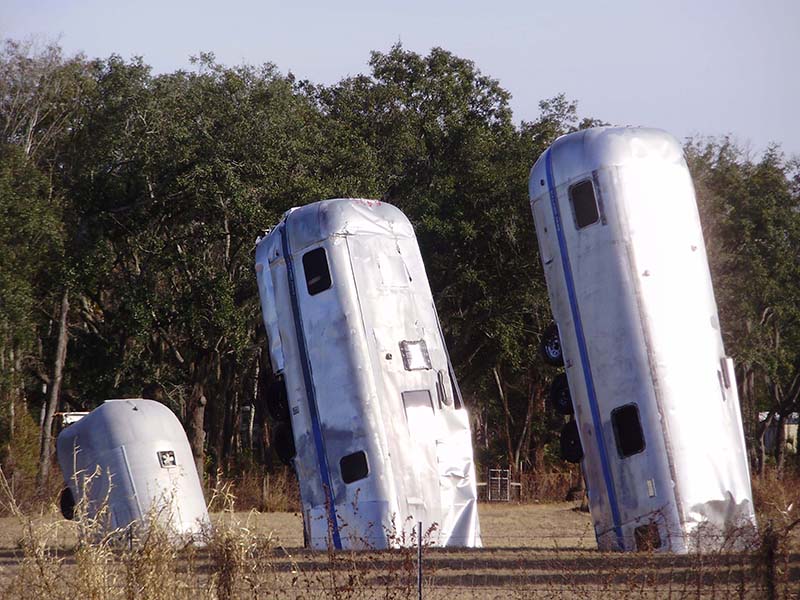 Airstream Ranch has turned heads and caused a stir from the day Bates started burying the trailers. Telephones began ringing all over Hillsborough County, and by the time the nose of the second trailer was slid into a hole in the ground dug by a backhoe, several news helicopters were hovering overhead.

Building code inspectors followed close on the heels of the news people, and they immediately ordered Bates to remove the “eyesore.” Bates responded that one man’s eyesore is another man’s art, and refused. The county shot back with claims that the trailers were unauthorized off site advertising for his RV dealership.

Some neighbors loved the buried trailers, while others hated them and wanted to see them gone. One neighbor complained that increased traffic in the neighborhood made it dangerous for children to play or ride bicycles.


Years of legal wrangling followed, while the county fined Bates $100 a day until the trailers were removed. He appealed, collected signatures on petitions to keep his roadside attraction, and eventually a three-judge panel ruled in their favor and they got to keep their ranch.

Now Bates has announced that he plans to install lighting and benches, and turn the place into a park. At least one couple has said they would like to get married with the trailers as a background to their nuptials.

While visitors to Cadillac Ranch can tag the old cars with graffiti, Bates wants to keep his Airstreams looking original, and any painted adornment that shows up is quickly erased.

Bates said that he had no idea how popular his little art display would become, but that they have had visitors from all over the country, and from as far away as Japan. Texas businessman Stanley Marsh III, who created Cadillac Ranch, said in a newspaper interview about Airstream Ranch, “Imitation is the sincerest form of flattery, I hope your area and your artists have as much fun with it as I have had with mine. If I were in your neighborhood, I’d go look at it.” That’s a darned good endorsement from a folk art legend.

Airstream Ranch is located near Exit 14 on Interstate 4, and it is not uncommon to see cars pulled over on the shoulder, hazard lights blinking, while they gawk or take pictures. Others take the safer option of stopping at Bates’ RV dealership, where an employee will shuttle them to the trailers in a golf cart. While you’re at the dealership, you can buy Airstream Ranch T-shirts and postcards to commemorate your visit. I imagine if you decided that you want an Airstream of your very own, the folks at Bates RV would be happy to help you out with that too.

Thought For The Day – Instead of wondering when your next vacation is, you ought to set up a life you don’t need to escape from. – Seth Godin