Note: This article first appeared in the January-February 2009 issue of the Gypsy Journal.

President Harry S. Truman was one of the most popular political figures of the 20th Century and helped shape the face of not only the United States but the rest of the world in the years following World War II. Under Truman’s presidency, the desegregation of the United States’ military began, the United Nations was formed, and the Marshall Plan was put into action to help rebuild war ravaged Europe. His National Security Act of 1947 reorganized the military and resulted in the formation of the United States Air Force.


Truman was a friendly and affable man, but not a pushover. When railroad workers went on a nationwide strike in 1946 and brought all commercial and passenger service to a halt for over a month, refusing to negotiate, Truman seized control of the railroads and gave the striking workers two choices – go back to work or be drafted into the Army. Within hours the trains began moving again. Unlike many Washington politicos, President Truman took responsibility for his decisions, right or wrong, and kept a sign on his desk that said “The buck stops here.”

To escape the stresses of Washington, Truman made a vacation trip to Key West, Florida in 1946, and immediately fell in love with the island town. He would return often and spend a total of 175 days in Key West during his time in office. 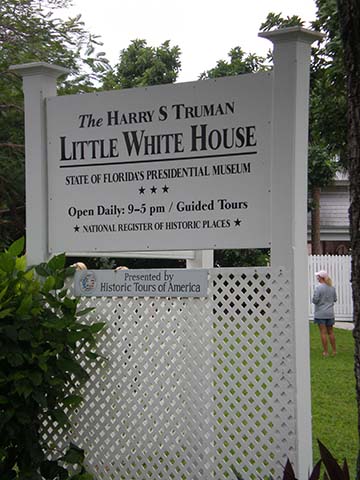 A wooden duplex at the Navy base at Key West contained Quarters A for the base commander and Quarters B for the paymaster. Built in 1890, the duplex overlooked the harbor and offered Truman a refuge from the official presidential residence in Washington, D.C., which he referred to as the “Great White Prison.” To make more room for the President and his entourage, the wall separating the two halves of the duplex were removed to make one large home. President Truman would return for a total of eleven visits while he was President, and five more trips after he left office. Due to President Truman’s visits, the house became known as the Little White House. 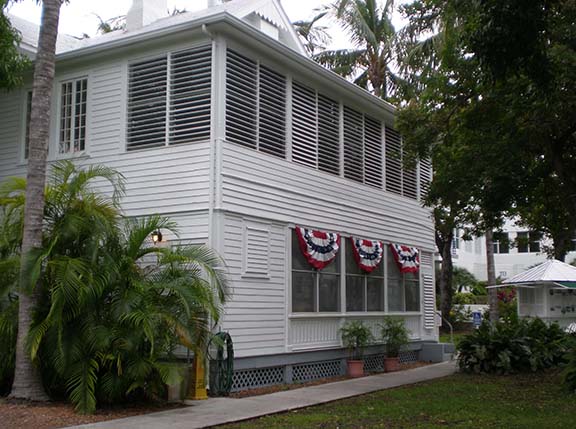 Life in laid back Key West was far different than the formality of Washington. Here Truman could forsake a suit and tie for Hawaiian shirts and khaki trousers. He took frequent walks through town, fished with members of his staff, and loved playing poker every evening with his cronies. 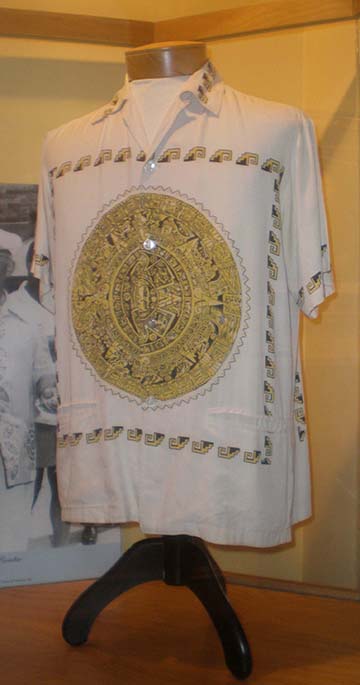 At his Little White House, Truman normally arose about 7:30 a.m., dealt with the affairs of state during the morning, and then took a break during the afternoon to write personal letters or for a short nap.


Truman was not the first distinguished guest to spend time at the home. President William Howard Taft visited in December, 1912 on his way to Panama. During World War I, Thomas Edison resided in the house while working on depth charge research for the U.S. Navy. During Truman’s tenure, many world leaders and top military figures visited him at the Little White House.

After Truman left office, the house saw several other presidents come to visit. President Dwight D. Eisenhower held important meetings here in December 1955, and returned again in January, 1956 while he recovered from a heart attack.

In 1961, President John F. Kennedy held a summit meeting at the house with British Prime Minister Harold Macmillan to discuss plans for the Bay of Pigs invasion. He returned in November, 1962 following the Cuban missile crisis.

In 2005, former President Bill and Senator Hillary Clinton used the house as a weekend retreat, and in 2007, former President Jimmy Carter and his family also spent a few days vacationing at the Little White House.


The Navy base was named the Truman Annex in 1973 following the death of President Truman in 1972, and the house remained a living quarters for the commanding officers of the base until Truman Naval Station was closed in 1974. The Little White House was listed on the National Register of Historic Places in 1974.

Today visitors to Key West can take a guided tour of the Little White House and learn about President Truman’s time here. Displays in the house include the original furniture Truman used, his desk, one of his beloved Hawaiian shirts, and the custom built poker table where he enjoyed his nightly game.

The Little White House is located at 111 Front Street in the Truman Annex and is open 7 days a week, including all holidays. Tours are offered approximately every 20 minutes from 9 a.m. until 4:30 p.m. daily. The public rooms of the Little White House and the introductory film are accessible to guests with mobility issues. Scripts for the hearing impaired are available upon request. As with most of Key West, parking is limited. The closest public parking is at Mallory Square or the Westin parking garage. There is no room for RVs to park at either location. For more information, call (305) 294-9911.

Congratulations Kathy Brophey, winner of our drawing for an audiobook of Shades of Moloch: Star Borne: 2, an excellent science fiction tale by my friend Sharon Delarose. We had 54 entries this time around. Stay tuned, a new contest starts soon.

Thought For The Day – My super power is holding onto junk for years and then throwing it away a week before I need it.