Aberdeen: The Dacotah Prairie Museum displays exhibits on the prairie, early settlers, their lives and lifestyles, and the railroad and its influence on settlement and Native American life.

Brookings: The South Dakota Agricultural Heritage Museum is dedicated to preserving the state’s rich agricultural history and rural heritage. Displays include farming equipment, a one room schoolhouse, a homestead shack, and a 1915 farmhouse. 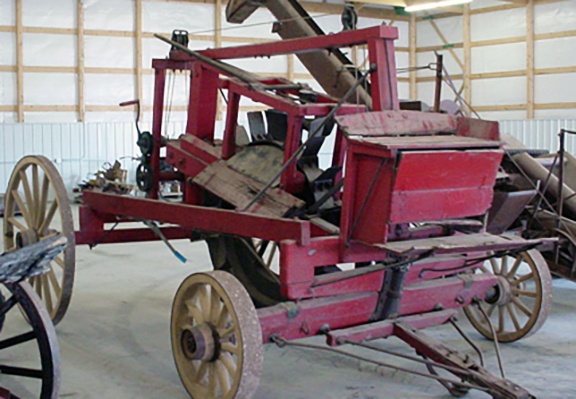 Buffalo: The Buffalo Historical Museum and One-Room Schoolhouse preserves local history from the cattle ranch and homesteading eras in Harding County. The site features a one-room schoolhouse, built in 1914.

Carthage: The Campbell Original Straw Bale Built Museum is dedicated to preserving South Dakota History. As well as hosting an assortment of historical exhibits, what makes the museum special is that it is completely insulated with home-grown South Dakota straw!

Chamberlain: The Akta Lakota Museum and Cultural Center is a tribute to the Sioux nation and offers visitors a rare and fascinating glimpse into the Lakota culture, both past and present. Visitors are taken on a visual journey through the proud heritage of the Sioux and into the excitement of contemporary Sioux art. 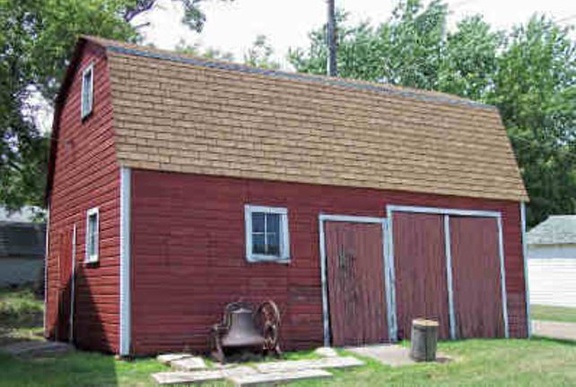 Crazy Horse: A work in progress, when finished the Crazy Horse Memorial, depicting Lakota Chief Crazy Horse on his stallion, will be 641 feet long and 563 feet high, making it the largest sculpture in the world. Today visitors can see the unfinished monument and tour the Visitor Center, and the Indian Museum of North America.

Custer: The work of nationally recognized woodcarvers is displayed at the National Museum of Woodcarving.

Custer: Four Mile Old West Town ghost town is home to about 50 businesses and homes that are furnished. Most of the artifacts are tagged to explain how they were used. The doors are open so visitors can “touch” artifacts, feel the atmosphere and understand yesterday. Items on display include apprentice agreements, courtship letters, letters from homesteaders, indenture agreements, an 8th grade school exam, Civil War identification, and more.

Custer: At 139 miles, Wind Cave is the second longest cave in the world. It is filled with calcite crystals and other wonders that make up the “jewels” of Wind Cave National Monument. Guided tours take visitors underground to experience this natural wonderland. 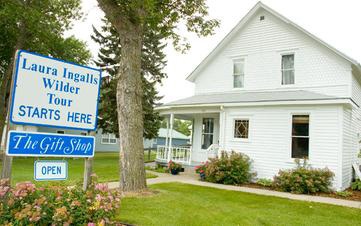 Deadwood: On October 2, 1876, Wild Bill Hickok was sitting in Saloon No. 10, at 620 Main Street playing poker when Jack “Broken Nosed” McCall walked up behind Hickok, pulled out his six-gun and fired one shot into Wild Bill’s back. Hickok fell to the floor dead. He clutched his poker hand, aces and eights, known ever after as the “dead man’s hand.” Now a museum, the saloon displays the chair that Hickok was sitting in when he was killed. 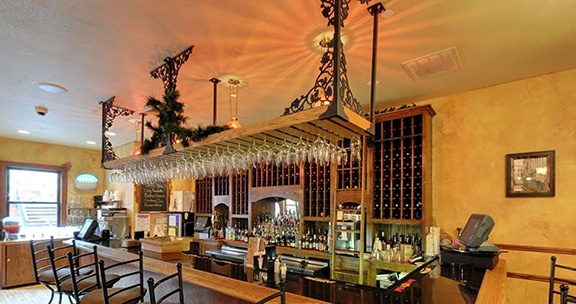 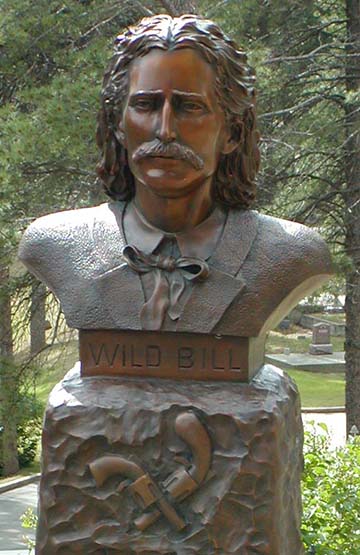 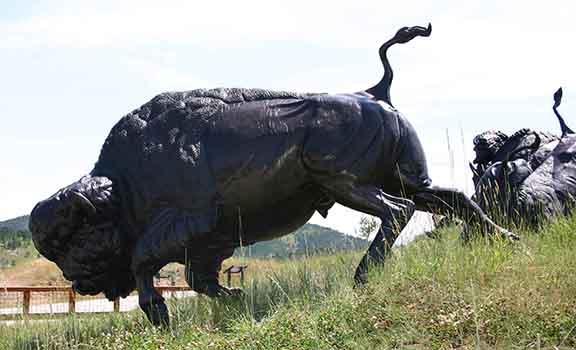 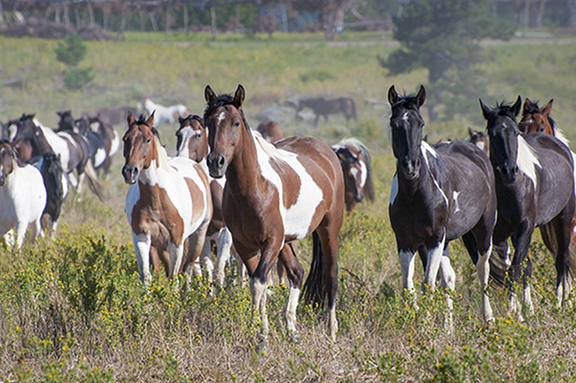 Hot Springs: More than 26,000 years ago, large Columbian and woolly mammoths were trapped and died in a spring-fed pond near what is now the southwest edge of Hot Springs, South Dakota. Discovered by chance in 1974 while excavating for a housing development, the Mammoth Site of Hot Springs is the world’s largest Columbian mammoth exhibit and research center for Pleistocene studies. 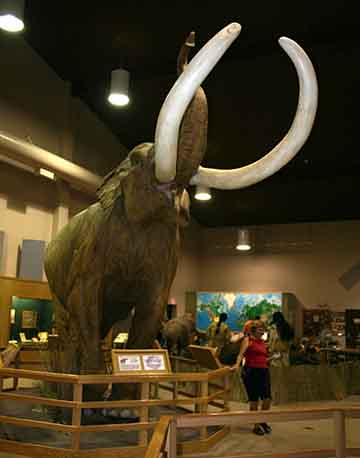 Keystone: The massive sculptures of four United States presidents, George Washington, Thomas Jefferson, Theodore Roosevelt, and Abraham Lincoln are carved into the face of Mount Rushmore. Mount Rushmore National Monument is the most popular attraction in the state, drawing three million visitors a year from around the world. 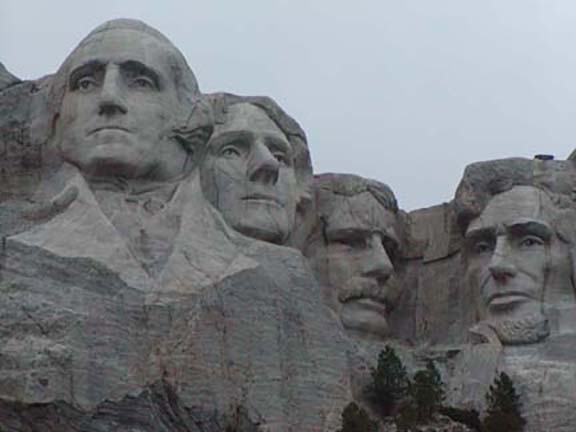 Lead: At the Black Hills Mining Museum, guides will escort you on a fascinating tour of a simulated underground level of the Homestake Gold Mine, offering the only comprehensive look at both early-day and modern underground mining to be found in the Black Hills. 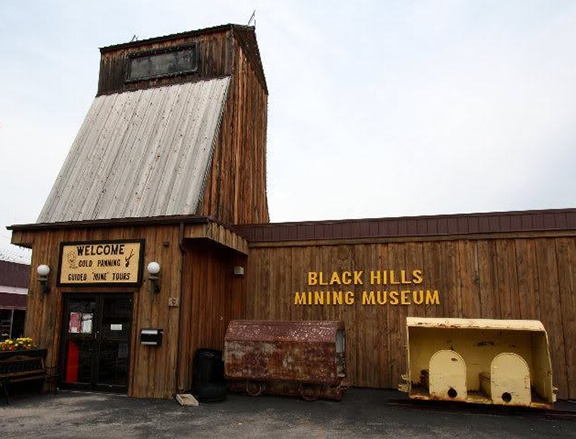 Mitchell: At the Dakota Discovery Museum visitors can learn the traditions of early American settlers, railroading, farming, and ranching, to the fur trade, hunting, and the rugged experiences of stagecoach travel. The museum also features an extensive collection of Native American beadwork and an authentic Indian tipi. The museum complex includes the 1886 Italianate Beckwith House, 1885 Sheldon School, 1908 Farwell Church, and 1914 Dimock Depot

Mitchell: Looking like a castle, complete with colorful minarets, turrets, and domes, Mitchell’s famous Corn Palace is an architectural wonder showcasing South Dakota agriculture and innovation. The exterior of the Corn Palace is completely decorated with ears of corn and bundles of native grasses and grains. Every year in early summer, the outside is completely stripped and a new design with a different theme is applied to the walls.

Mobridge: The Klein Museum showcases two cultures, European and Sioux Indian. The museum has a collection of early Indian beadwork, head dresses, clothing, tools, and photographs. There are also displays of items used by early pioneers of the area, many arranged in room scenes – a post office, trapper’s shack, doctor’s office and dentist office, in addition to an restored country schoolhouse. 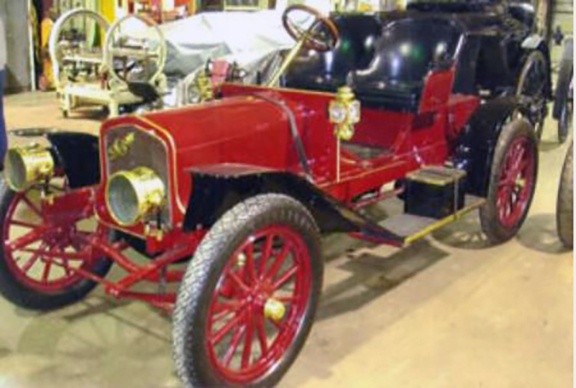 Murdo: Originally built as a movie set, 1880 Town is a collection of more than 30 buildings authentically furnished with thousands of relics. Visitors will also see memorabilia from the late Casey Tibbs, a champion rodeo bronc rider, and many props that were used in filming the movie Dances with Wolves. 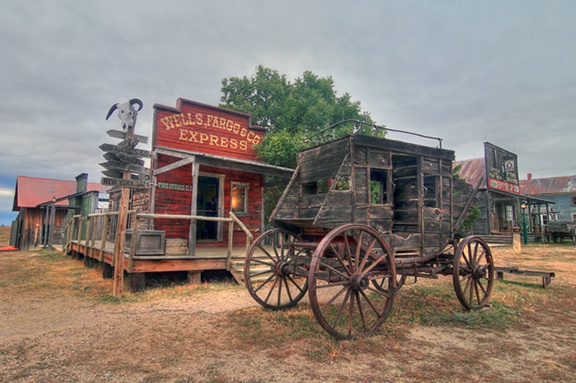 Philip: The Prairie Homestead is an original set of homestead buildings including a sod dugout home built in 1909. Visitors can explore the sod houses and get a feel for pioneer life on the prairie.

Philip: Minuteman Missile National Historic Site was created to illustrate the history and significance of the Cold War, the arms race, and intercontinental ballistic missile (ICBM) development. The facilities represent the only remaining intact components of a nuclear missile field that consisted of 150 Minuteman II missiles, and 15 launch control centers. 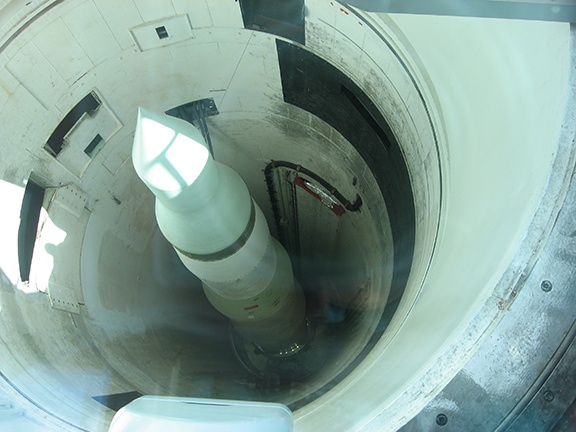 Pierre: The South Dakota Discovery Center and Aquarium is a hands-on science playground the entire family will enjoy.

Pierre: The South Dakota National Guard Museum was established to provide a facility for memorabilia and historical documents pertaining to the South Dakota National Guard. The museum is a repository of historical information for both the Army and Air National Guard. The museum has a large exhibit area displaying an A7-D jet, a Sherman tank, cannons and howitzers, and memorabilia and artifacts from the Dakota Militia of the 1860s through the present.

Pierre: The Cultural Heritage Center brings state history to life with hands-on exhibits that tell South Dakota’s story from before the arrival of Europeans through the end of the 20th century. Displays include early American Indian cultures, the arrival of white settlers, river boats and railroads. Visitors can tour a sod house, a Lakota teepee, and see a replica gold mining operation. The museum includes a collection of over 1,300 Native American objects.

Rapid City: The Journey Museum takes you on an incredible trek through time, from the violent upheaval that formed the mystical Black Hills over 2.5 billion years ago to the continuing saga of the Western frontier. Exhibits include fossils and dinosaur bones, displays on American Indians, pioneers, mountain men, gunfighters, and settlers. 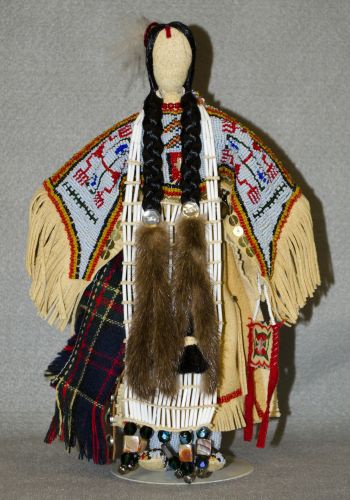 Rapid City: A display at Memorial Park includes two sections of the Berlin Wall and tank traps from Checkpoint Charlie, along with information on the Cold War. 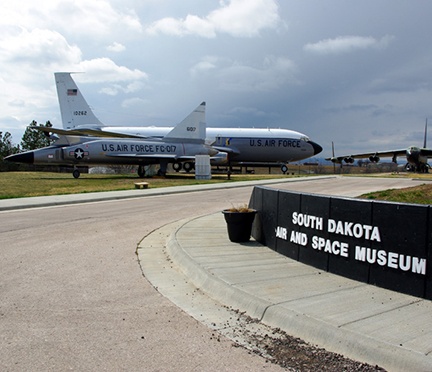 Roslyn: The International Vinegar Museum displays vinegars from all over the world, paper made from vinegar, and information on vinegar production.

Sioux Falls: A full size concrete reproduction of the battleship USS South Dakota can be found in Sherman Park.

Sioux Falls: The Old Courthouse Museum, housed in a restored 1890s Romanesque building constructed of native pink quartzite, is a National Historic Landmark that features an 1893 clock tower, a restored circuit courtroom and law library, and sixteen wall murals painted from 1915 to 1917. The museum’s exhibits focus on the natural and cultural histories of the Siouxland region. 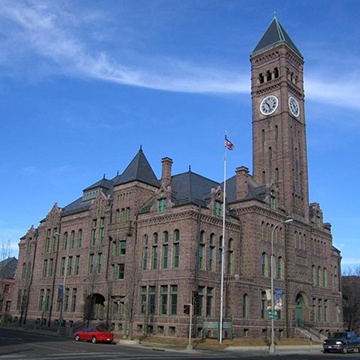 Springfield: The Springfield Historical Society Museum displays a large collection of artifacts on the community’s history. Included is a collection of antique horse-drawn farm machinery, a 1910 dental office with X-ray machine, Saint Mary’s School for Indian Girls artifacts, a model Main Street, and a collection of more than 5000 seashells from around the world.

St. Francis: The Lakota Indian culture is honored with displays of artifacts and photographs of famous Lakota leaders at the Buechel Memorial Lakota Museum.

Sturgis: The Sturgis Motorcycle Museum & Hall of Fame has an impressive collection of antique and special interest motorcycles on display. 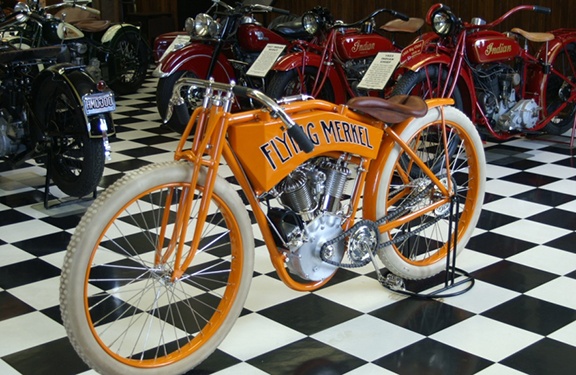 Sturgis: Fort Meade, just outside Sturgis, was the first military outpost in the Black Hills. It was built in 1878 by the remaining troops of Custer’s 7th Cavalry to maintain peace between the Lakota and Cheyenne Indians and prospectors. The fort is distinguished as having been the birthplace of the national anthem, The Star Spangled Banner, when the commanding officer ordered the song played at every official event. The Fort Meade Museum has excellent displays on the cavalry units who served here.

Vermillion: The National Music Museum on the campus of the University of South Dakota displays over 6,000 rare and unique musical instruments, including a 1785 French harpsichord, a 1693 Stradivarius violin, Civil War drums, and a saxophone once owned by former President Clinton.

Wall: Wall Drug in this small prairie town, is world famous for the signs proclaiming its free ice water that can be found around the world. 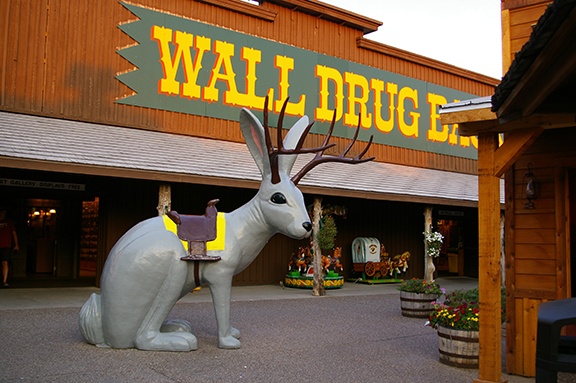 Watertown: The Codington County Heritage Museum, located in the former Carnegie Library building in Watertown, displays thousands of local history artifacts, more than 2000 photographs, a turn of the century Victorian home, a country school, a dry goods and general store, a 1920s dentist office, and a military display.

Webster: Exhibits at the Museum of Wildlife, Science & Industry include an original antique beauty shop and barbershop, a mortuary area including a portable altar for home funerals, model tractors, tools, early printing presses and typewriters, military uniforms, a homestead kitchen, a bedroom with a quilt made from silk neckties, a parlor, and a music room. There is also a millinery shop, Native American artifacts, an iron lung used for polio patients, a blacksmith shop, and antique tractors. 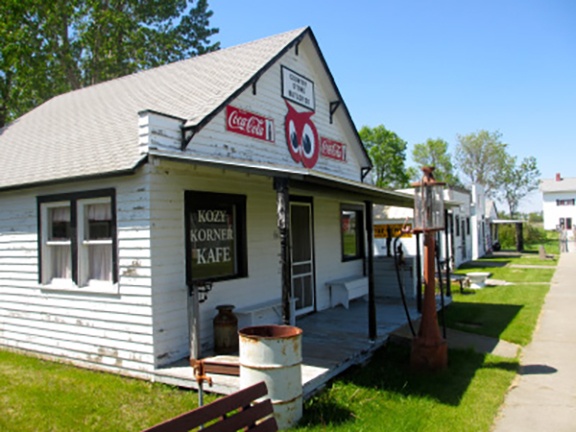 Wessington: The Jerauld County Pioneer Museum consists of four buildings displaying memorabilia and print information relating to the history of Jerauld County and its immediate area, artifacts, genealogy information, a one-room rural school, a blacksmith shop containing a forge and many hand-made tools, and a former country doctor’s clinic.

Yankton: The Dakota Territorial Museum houses interesting and unique pieces associated with the Territorial period and beyond. Outbuildings include a restored one-room schoolhouse and an 1892 Great Northern Railroad Depot.

Congratulations Norma Heck, winner of our drawing for an audiobook of Chesapeake 1880 by my friend Ken Rossignol, a tale of life in the Chesapeake Bay region as the industrial revolution changed the world forever. We had 122 entries this time around. Stay tuned, a new contest starts soon.

Thought For The Day – An idiot with a computer is a faster, better idiot.