Nick's Blog » The Balance Of Nature

Anybody who has spent much time wandering around in the outdoors knows that Mother Nature has a system of checks and balances. If there is season or two with good rain and good weather, small game like rabbits will appear in abundance. And being rabbits they breed like…. well, rabbits. One would think that before long the world would be overrun with the cute little critters. But Mother Nature won’t let that happen because it wouldn’t be good for the planet or the rabbit population. So suddenly we’ll see a great increase in the number of predators like hawks and coyotes, who feed on the rabbits. And before long the numbers of rabbits start to drop back down again.


Of course then man comes along and upsets the balance of nature. We built subdivisions and shopping centers, and yes, even RV parks where those wild things once roamed. As we destroy their habitat, things get all screwed up. Maybe that’s why Mother Nature goes on a rant and sends hurricanes and tornadoes our way every so often; just to remind us of who’s really in charge.

And this isn’t just on a grand scale. If you upset the balance of nature even a little bit, sometimes that same Mother Nature will bitch slap you to get your attention. I was reminded of that yesterday.

Anybody who knows me very well knows that I have a very selective diet. Some would call me a picky eater but that’s not true at all. I’ll eat anything as long as it first had to suffer and die. I’m allergic to onions, so I don’t eat many vegetables. It’s kind of like one of those family feud things; if your cousin hurts me, I don’t like you either. But give me fried dead meat, or grilled dead meat, or barbecued dead meat, or baked dead meat and I’m a happy camper. Just hold the veggies.

Yesterday we took Travis and Geli to a place in downtown Tuscaloosa called Glory Bound Gyro Company. Gyros aren’t really my thing, but it sounded good to the others and their menu said they would make things to order, so I figured I would just get a shrimp and cheese gyro and tell them to leave all the vegetation off.

As appetizers Terry ordered a plate with three different kinds of hummus along with fresh, warm pita bread. Now any red-blooded meat eating man knows that hummus is girly food. But I was pretty hungry and one of the offerings was garlic hummus, so I gave in to peer pressure and tried to little dab on a slice of the bread. (Surprisingly, while they are in the same family, garlic doesn’t bother me like onions do, and Terry uses it quite often in cooking.) But still, hummus? I was surprised that it wasn’t all that bad, and forced myself to have another little wedge of the bread with it, and then another just to be polite. And that’s when Mother Nature stepped in and told me to get back in my corner where I belonged.


Way back when I was a young soldier I went to Airborne school and learned how to jump out of perfectly good airplanes. That was about 45 years ago, and since then one of my most prized possessions were my Airborne wings. While they have no monetary value, there was a lot of sentiment attached to them. Some of the old soldiers reading this will understand that. My wings were attached to the baseball cap I wear, and about the time our waitress brought our meals I happened to look at my cap and noticed that my wings were gone. Talk about a sinking feeling in your stomach, and it wasn’t from the hummus! 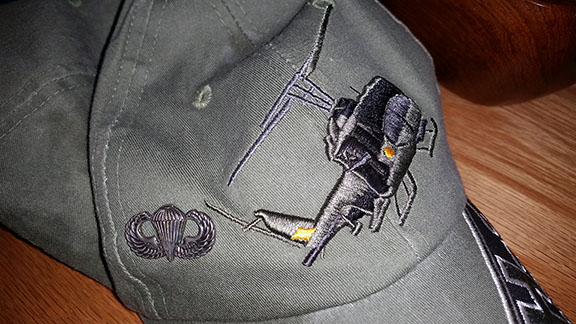 We looked around under the table, Geli left her phone number with the manager in case somebody should happen to find them and turn them in, and walking back to our car in the pouring rain and dark the four of us looked as best we could, all to no avail.

My night vision sucks so Terry drives after dark, and when we got in our Explorer her glasses were covered in raindrops, so she took them off and asked me to hold them. Back at the motorhome we looked around a little bit in the rain to see if maybe I had lost the wings going out to the car, again with no luck. I’m afraid they’re gone for good.

Once we were inside and out of the rain, Terry asked me where her glasses were and I realized I had no idea what I had done with them. I assumed I had left them in the SUV, so I went out to get them. Just as I got to the passenger door I felt something crunch under my feet and realized I had assumed wrong. I’m pretty sure I heard Mother Nature chuckling when I carried the pieces back inside to confess what I had done. Terry managed to get both lenses back into the somewhat mangled frames, but they are so scratched up she’s going to need a new pair.

Later in the evening I was telling my buddy Greg White about all of this and he said I had started down a slippery slope and he wouldn’t be surprised at all if I wasn’t eating salad by this time next week. But we agreed I probably shouldn’t do that. It would probably cause a crack in the space/time continuum or something.


Be sure to enter our latest Free Drawing. This week’s prize is an audiobook of Fomorian Earth: Star Borne: 1 by my friend Sharon Delarose. To enter, all you have to do is click on this Free Drawing link or the tab at the top of this page and enter your name in the comments section at the bottom of that page (not this one). Only one entry per person per drawing please, and you must enter with your real name. To prevent spam or multiple entries, the names of cartoon or movie characters are not allowed. The winner will be drawn Sunday evening. 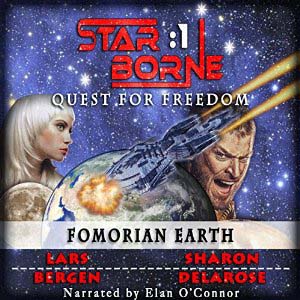 Thought For The Day – I’m not so sure about an inner child, but I do have an inner idiot who surfaces all too often.

13 Responses to “The Balance Of Nature”