Note: The story of Jim the Wonder Dog first appeared in the July-August 2009 issue of the Gypsy Journal.

Forget Lassie and Rin Tin Tin. In the pleasant small town of Marshall, Missouri, we learned the story of what has to be the most amazing canine of all time, Jim the Wonder Dog. And unlike those movie hero dogs, Jim was real, even if his accomplishments seem the stuff of Hollywood fiction.


Jim was a Llewellyn English Setter that came from a long line of champion hunting dogs. He was given as a gift to Samuel VanArsdale, who operated the Ruff Hotel. VanArsdale was an avid hunter, and he quickly bonded with his new puppy.

Jim was taken to well known dog trainer Ira Irvine, who quickly determined that the young dog was never going to be a good hunter. Jim refused to be trained. While the other dogs were being taught to find and retrieve birds, he just lay under a tree and watched. The dog trainer suggested VanArsdale give Jim to a family who just wanted a pet and look for another hunting dog. But on Jim’s first hunt, he quickly proved that he had learned well after all. He immediately came to point on a quail, held his position until the bird was shot, and then retrieved it, dropping the dead bird in his master’s hand. 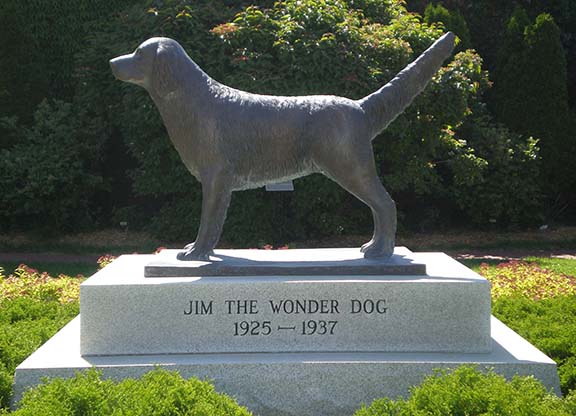 This was the start of a fabulous hunting career. Jim turned out to be the finest hunting dog VanArsdale had ever seen. Jim had an uncanny sense of where the quail were, and refused to go where there were no birds. Over 5,000 birds were shot over him in his long hunting career, and he was called Hunting Dog of the Century by Missouri Life and Missouri Conservation magazines.

But being a fine hunting dog was the very least of Jim’s accomplishments. VanArsdale realized how gifted Jim was quite by accident. When the dog was three years old, they were out hunting on a hot day and VanArsdale got tired. He said to Jim, “let’s go and rest under the shade of the hickory tree.” They were in a forest with many kinds of trees, but Jim went directly to the only hickory tree in sight and lay down. Chuckling at what he considered a fluke of luck, VanArsdale then said to Jim “Okay, now go to a black oak.” Jim got up and trotted to the appropriate tree. Amazed, VanArsdale directed Jim to a cedar tree, a stump, and even a tin can, and the dog performed flawlessly every time!

At first VanArsdale and his wife Pearl were reluctant to tell anybody about Jim’s seeming ability to understand everything they said, for fear of being thought crackpots by their friends. But soon word got out and Jim was delighting others with his ability to carry out their requests. Everybody was amazed, and it seemed the more they challenged him, the more Jim could do. Word spread and people came to Marshall just to see this unbelievable canine. 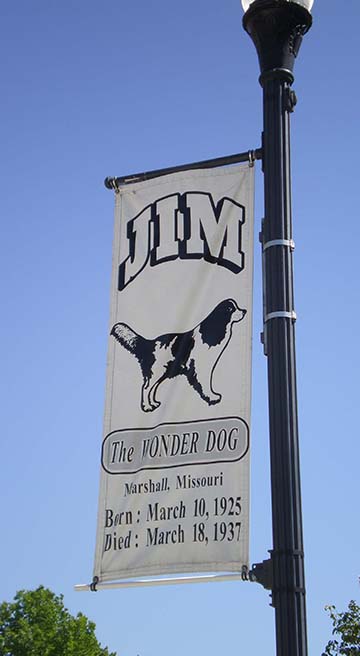 Unable to account for Jim’s capabilities, VanArsdale agreed to allow Jim to be examined at the Veterinary Department at the University of Missouri. The professors there determined that Jim was like other Llewellyn Setters, with a few exceptions; they found he had a wider span across the brow then normal, and the measurement between his brow and the top of his head was more than other dogs of his breed. They also noticed, as had many others, that Jim’s eyes were large and had often been described as human-like.

Jim then performed several feats for the professors and students at the university, carrying out instructions given to him in not only English, but several foreign languages. A Paramount News film team recorded the event.

Jim was then asked to be taken to a joint session of the Missouri legislature, where he again astounded the audience. Someone suggested that VanArsdale was somehow sending signals to the dog, so a telegraph operator was brought in. Someone whispered a request in the operator’s ear, and he tapped it out in Morse Code. Again Jim did exactly as instructed!

While VanArsdale enjoyed showing Jim off, he refused to capitalize on it. He refused requests to display Jim at the Chicago Exposition and in New York. He even refused a request to bring Jim to Washington, D.C. to visit President Franklin D. Roosevelt! VanArsdale said he was a small town man and Jim was a small town dog, and they just didn’t fit in the big city. When Hollywood called with an offer to bring Jim to California to make a movie, for the princely sum of $384,000, VanArsdale turned them down. He refused to profit in any way on what he considered Jim’s God-given talent.


Many of Jim’s feats defy imagination. If they had not all been documented and performed before large groups of onlookers, one might think they were tall tales. It almost seemed that once Jim proved he could so something, he wanted to do something even more amazing. In a crowd of people in the hotel lobby, someone would say “Find the hardware salesman,” or “Find the man with the most change in his pocket” and Jim would immediately go to the appropriate person and sit down in front of them. He could also pick out a man with a red tie or a girl in a blue dress, even though dogs are color blind.

One common request was for Jim to go out on the street and find a particular car with an out of state license plate, a car with a certain license plate number, or a car of one brand or another. Each time Jim went right to the car and sat down beside it, even if it was parked several blocks away. VanArsdale could even write a request on a piece of paper, show it to Jim without saying a word, and the dog would do it.

Some people believed it was all a hoax, and that VanArsdale was somehow signaling Jim, so they wrote their requests in a foreign language and showed it to the dog, who again performed perfectly.

Perhaps Jim’s most astounding ability was being able to determine the sex of unborn babies. He would walk up to a pregnant woman and remain standing until his owner said either boy or girl, and Jim would not sit until the right sex had been spoken. Sure enough, on delivery day, the woman always gave birth to whatever sex Jim had indicated her baby was.

Jim also predicted the winner of the Kentucky Derby seven years in a row. The names of all of the horses entered in the race were written on slips of paper and shown to him, and Jim would paw at the one he selected. The names were then locked away in a safe until after the race, and each time Jim’s prediction came true!

Pearl VanArsdale told many amazing stories about Jim. Her mother and two of her sisters lived in separate rooms of the hotel, and she would tell Jim which one she wanted to visit, and he would lead her to the correct door. Another time, she fussed at her husband for tossing the decorative pillows on their bed to the floor when he took an afternoon nap. After his nap, when VanArsdale got out of bed, Jim picked the pillows up in his mouth and put them back in the appropriate positions on the bed.

Jim’s fame spread far and wide, and his story was told in several magazines. Ripley’s Believe It Or Not examined him and reported on his uncanny abilities in its syndicated newspaper column.


The VanArsdales traveled a lot, but they refused to stay anywhere Jim was not allowed in their room. On a visit to Florida they hired a hotel bellhop to walk Jim every day. Unknown to them, he was using Jim to select the winners of the horse races, and was making a lot of money off the local bookies until the VanArsdales received a telephone call telling them that if they valued their dog’s life, they would get him out of town. They quickly packed their suitcases and left that night.

Jim was twelve years old on March 18, 1937 when VanArsdale took him with him on a fishing trip to the Lake of the Ozarks. Upon arrival at the lake, Jim got out of the car, took a few steps, and collapsed. He was rushed to the nearest veterinarian, but died a few minutes later.

The grief stricken VanArsdales wanted to have Jim buried in their family plot in Marshall’s Ridge Park Cemetery, but cemetery officials said that was impossible. So they had Jim embalmed and buried him in a specially made casket just outside the cemetery fence. People sent flowers from all over, and newspapers as far away as Canada printed Jim’s obituary. Calls, letters, and telegrams of condolence flooded in from all points of the compass.

But this was still not the final chapter in the story of Jim the Wonder Dog. Over time the cemetery expanded and the fence was moved, and today Jim’s grave is inside the cemetery, near the children’s section. Jim sleeps under a large shade tree, near the graves of children, which he always loved. 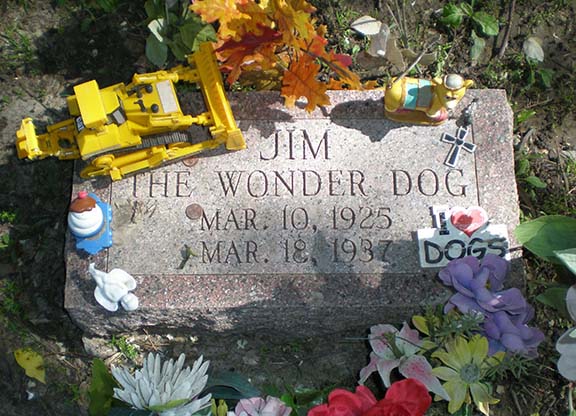 The VanArsdales and the Ruff Hotel are now gone, but the memory of Jim the Wonder Dog remains. A small memorial park occupies the land where the hotel once stood, with a statue of Jim, markers telling his story, and benches where you can sit and contemplate things that seem beyond human reason.

Thought For The Day – Always drink upstream from the herd.

3 Responses to “Jim The Wonder Dog”