After a quick visit with Greg and Jan yesterday morning we pulled out of the Colorado River Thousand Trails in Columbus, Texas at 10 o’clock, eastbound on Interstate 10.


I was a little apprehensive about going through Houston, but Greg had assured me that on a Sunday morning it shouldn’t be bad at all. And he was right (yes Greg, I know, you are always right). There wasn’t a whole lot of traffic and we made very good time. It was a good day for driving and we motored right along.

We crossed into Louisiana almost before we knew it, and Miss Terry managed to get a picture of the welcome sign, even though I hit a bump just as she clicked the shutter. 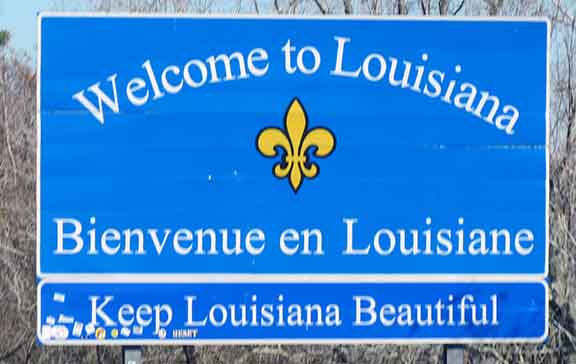 There were a couple of nasty bumps along the way, but overall the highway was pretty good. In fact, it was rougher the last few miles in Texas then it was after we crossed the state line.

This is the Calcasieu River Bridge in Lake Charles, officially named the World War II Memorial Bridge. As you can see, it’s very high, with two narrow lanes going in each direction. 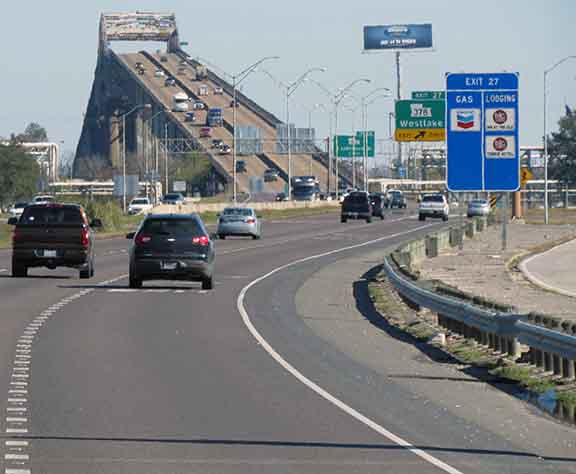 I managed to keep the sniveling down to a minimum and before long we were over the top and headed down the other side. 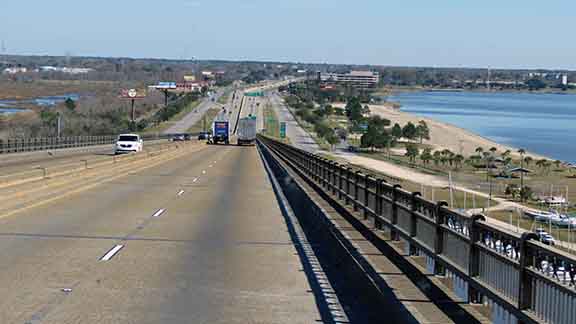 A while back a reader shared a bit of trivia about the bridge with me; metal dueling pistols are incorporated into the design of the bridge and help support the guardrails. In fact, there are supposed to be 10,572 of the pistols on the bridge. Here is a picture of them that he sent me. I didn’t count to see how many of them there actually were. 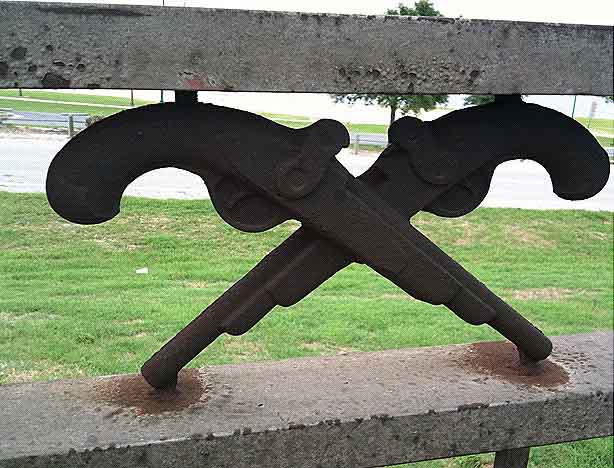 We got to Breaux Bridge about 3 PM and stopped at the Pilot truck stop for fuel. That’s one I’ll avoid in the future. It was very busy, and after filling up at the diesel fuel island, you have to make a U-turn to get back out of the parking lot, winding your way past 18 wheelers coming from every direction at the same time.


From there it was just a few miles to our stop for the night, Poche’s RV Park. How is it that in all of our trips across Louisiana we are just now discovering this hidden gem? It’s a very clean, quiet, Passport America park and the RV sites are located around one of several fishing ponds. $20 a night got us a super long pull through full hookup 50 amp site, and that included fishing if we wanted to. We don’t have time this trip, but you can bet we’re coming back to Poche’s the next time we’re in this area, and we’ll stay for a while. 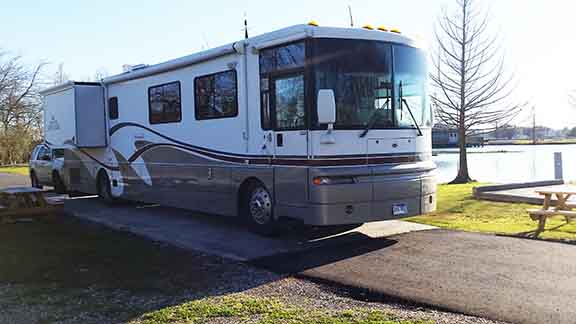 This is absolutely the longest pull through RV site I have seen in all of our years on the road. We could have easily parked another 40 foot motorhome and toad behind us in our site, and not been crowded. We had a good shot to the sky for our rooftop satellite TV dish and excellent 4G Verizon Internet service. 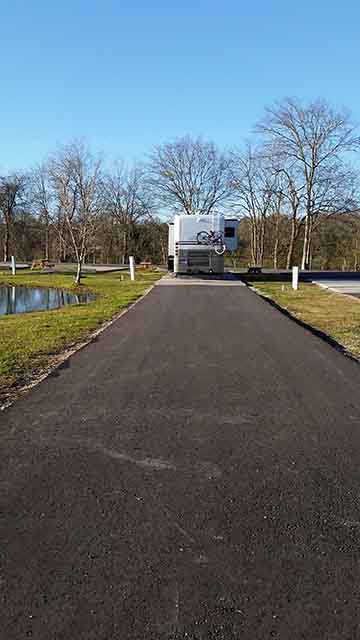 Here is another view of our motorhome from the other side of the pond. 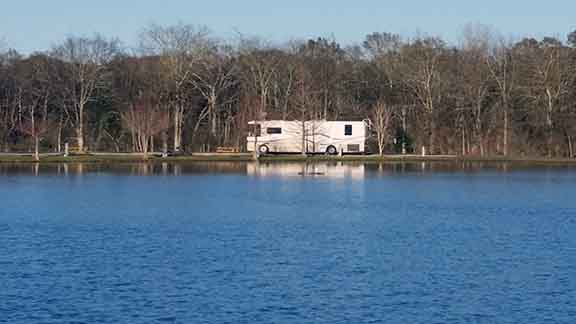 There are also lots of back-in sites that are closer together.

Greg had been telling us about a good place to eat in town called Pont Breaux Cajun Restaurant, formerly Mulate’s. Terry loves Cajun food, especially crawfish, so we decided to check it out.

I was a little concerned when we pulled into the parking lot because there are only three cars there and the place looked closed. But there was a young man standing outside, and when I asked if they were open he said yes, the evening rush just hadn’t started yet.

Terry ordered the half-and-half dish, which was fried crawfish and crawfish étouffée. It came with French fries and jambalaya, French bread, and a salad. 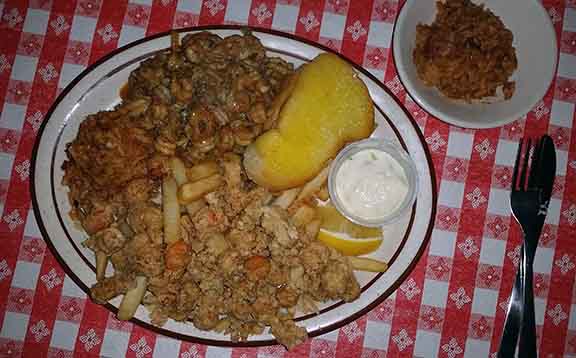 I went with fried alligator tail, mostly because I was curious. I had it once years ago at a place in Waco, Texas and found it to be very rubbery. Not this time around. It was tender and absolutely delicious. It came with French fries, jambalaya, and French bread, and I would order it again if we go back. And I would definitely go back. Terry said the next time around she would try the gumbo, which Greg and Jan both rave about. 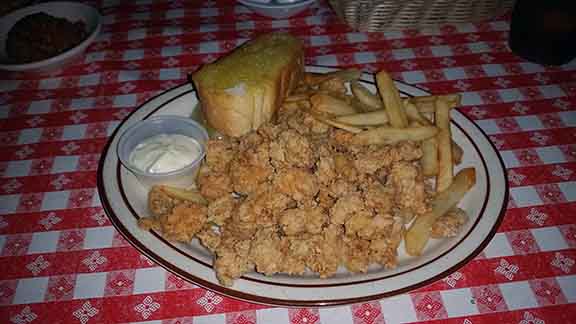 We got back to the RV park just in time to get this picture of the sunset over the lake. It may not be as dramatic as Arizona sunsets, but it was still pretty cool. 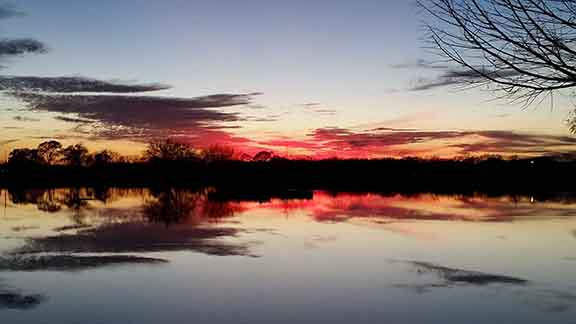 We would like to hang around here for a while, but we have reservations in Tuscaloosa, Alabama on Tuesday. It’s just under 400 miles, and while we could make it in one day, we will break it up into two. So today we will probably end up somewhere around Meridian, Mississippi, which will make it another 300 mile day, just like yesterday. Even with rough roads and the traffic around Baton Rouge, which sometimes can be rather hectic, it should be an easy trip.


Congratulations Molly Jarrett, winner of an audiobook of Crazy Days in Big Lake in our free drawing. We had 148 entries this time around. Stay tuned, a new contest starts soon.

Thought For The Day – I’m not saying you’re stupid, I’m just saying you have bad luck when you try to think.

3 Responses to “Crawfish And Gator Tail”