Nick's Blog » Befuddled On The Bypass

We were up by 7:30 yesterday morning, ready to start our long trip east from not so sunny Arizona. It was another cold night, so cold that when I ran the living room slide in, big sheets of ice fell off the top of it. Hopefully now that I’ve left the state the snowbirds can start enjoying some good weather for a change.


There was still a lot of snow on the mountains around Tucson from last week’s storm. This was the view as we were pulling out of the Pima County Fairgrounds at 10 AM. 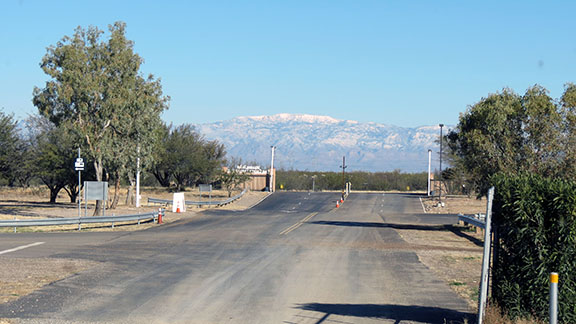 We got on Interstate 10 and pointed the nose of the Winnebago toward New Mexico, not sure where we were going to stop for the night. As I said in yesterday’s blog, we have reached the point where a 300 mile day is about all we really care to do. But I also added that when the road is good and we’re enjoying the ride, we don’t mind pushing it a bit more.

It was a good day for traveling and before long we were entering Texas Canyon, a wonderland of rock dramatic formations that I always enjoy seeing. 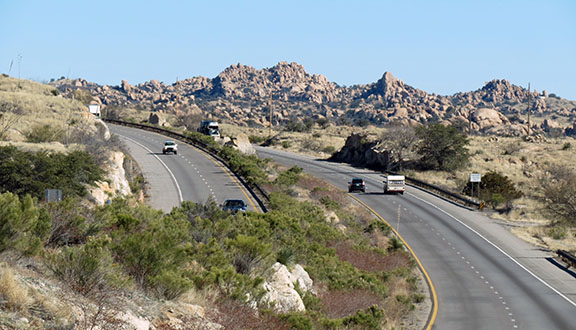 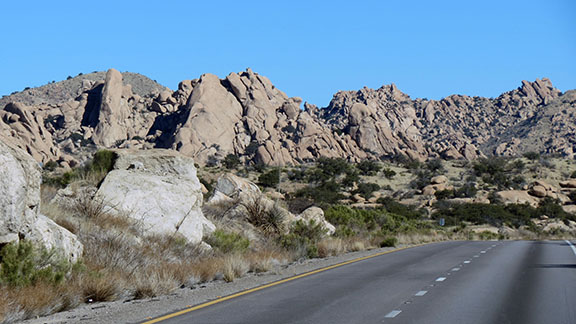 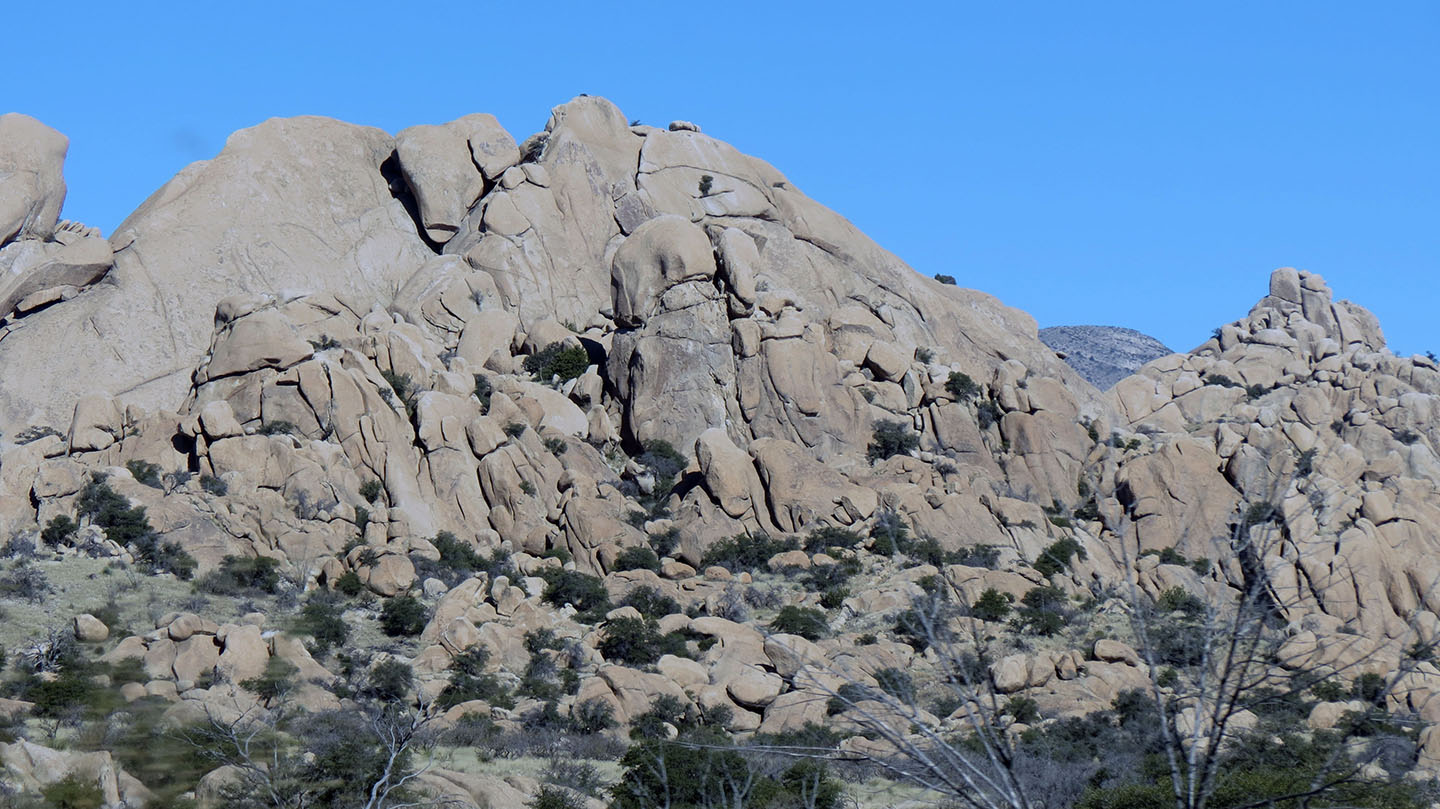 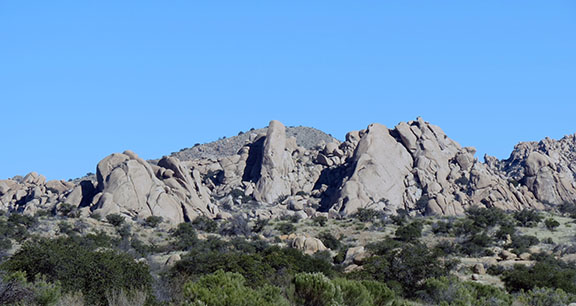 Back in the days when the West was really wild, there was a Butterfield Overland Mail stagecoach station in the canyon until the stages stopped running during the Civil War, when all the troops were sent back east to fight the Confederates. Cochise and the Chiricahua Apaches controlled this land for many years, and woe onto any unfortunate traveler who crossed their path. Just looking at all of the rock formations, you know this had to be a great place for an ambush.


Eventually we crossed into New Mexico and almost immediately ran into road construction, with the highway down to one lane in several places for a mile or two at a time. 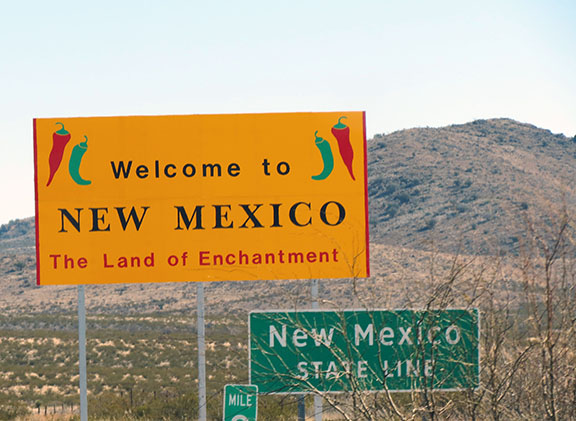 And we had not left the snow behind us, either! 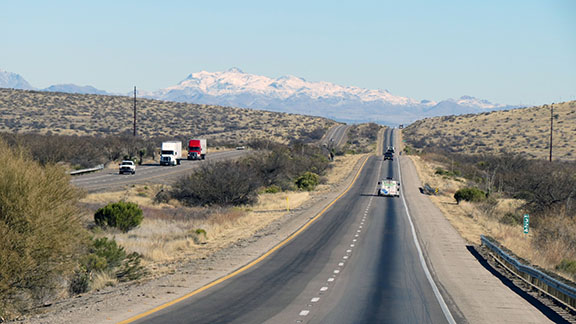 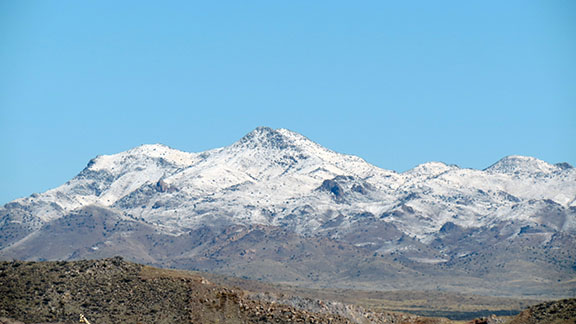 Going into Las Cruces, one might think they were somewhere in Colorado judging by the scenery. 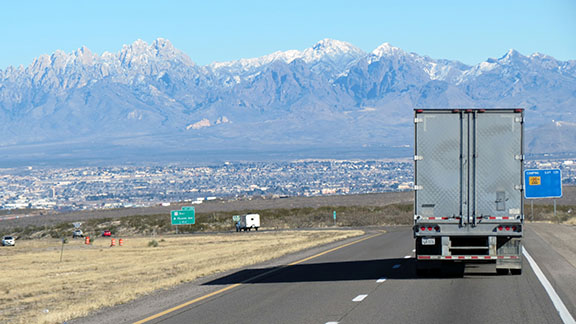 We had thought we might stop in Las Cruces for the night, but it was only about 2 o’clock when we got there and we decided to push on. We did make a quick pit stop at a rest area, where this big guy greeted us. 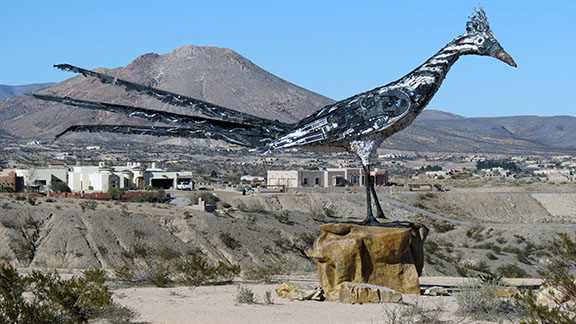 A couple of miles before the Texas state line we left the interstate and got onto State Route 404 and followed it east for eight miles to hook up with State Route 213, which took us south a few miles and into Texas. From there was it just a few more miles to the 375 Loop, which bypasses El Paso on the east side. 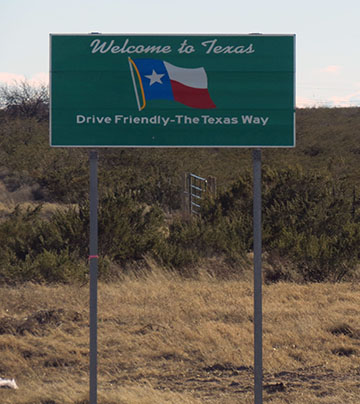 We usually take this route because the traffic on Interstate 10 through the city can be heavy and hectic. Unfortunately, this time around we should have stayed on the interstate. Between poor signage, road construction, and a GPS that wanted to show us the scenic side of town, we got all twisted around and had a very frustrating time of it. I’ve never liked driving through El Paso, and I told Terry the next time we go west we’re taking Interstate 40 through Amarillo and Albuquerque, no matter how far out of the way it is and what the weather is like.

Eventually we did get back on the interstate and continued on to Van Horn, where we stopped at Southern Star RV Park for the night. We discovered this place back in February when we were headed to Arizona for the Escapees Escapade rally and really liked it. It’s nothing fancy, but it’s clean, level, and the folks in the office are very friendly and helpful. There is easy access from Interstate 10, and at $15/night with Passport America for a pull through 50 amp full hookup site, it’s a heck of a deal.


It was a long day on the road, and with 430 miles behind us, we were more than ready to get a bite to eat and call it a night. We walked over to the Van Horn Cattle Company a couple of doors down from the RV park because the folks here and two of our readers have recommended it both times we were here. I’m glad we have that out of the way and won’t have to do it again.

So where will today put us? It’s 420 miles to the Escapees Lone Star Corral in Hondo, where we will stay for a night or two. If the weather and the road are as good as they were yesterday, we just may go for it. I guess we’ll know by the time we put the jacks down at the end of the day, won’t we?

Thought For The Day – It doesn’t take a very big person to carry a grudge.

9 Responses to “Befuddled On The Bypass”