Nick's Blog » She Was A Very Good Girl


It started out with a phone call from the freight company in Phoenix saying that the new issue of the Gypsy Journal was there and ready to be picked up. That was good news, since the printer had told us not to expect until today, or even tomorrow. Unfortunately, we still have not been able to get the quantity and combination of stamps from the post office, and it’s so crazy there right now that we may not be able to get them until after Christmas. Did I mention we’re both going to be really glad to put the hassles of mailing the printed issue out behind us?

Soon after I got off the phone with the freight company, Terry’s phone rang and it was her sister Lisa saying that she and her hubby Jim were going to be stopping by. We always enjoy spending time with them whenever we’re in town and their busy schedules permit. They showed up a while later, along with Jim’s brother Tom and his wife Jill. At first Tom and Jill sat out in the truck because they didn’t think there would be room for all six of us inside our “camper.” We assured them that our 40 foot motorhome was a little bigger than your typical camper, so there was plenty of room to join the party.

We had a nice visit, and Jim and Lisa invited us to come to their place this afternoon for a cookout. Did you hear that, you folks up in Wisconsin and Minnesota? We’re having a cookout three days before Christmas! How much snow is in your backyard?

After our company left, Terry and I got ready to drive into Phoenix to pick up the new issue of the paper. Of course, that involved getting hung up in a traffic slow down that took us 20 minutes to go six miles. We both agreed that wherever we decide to hang up the keys, if and when that day ever comes, it’s definitely going to be in some small town without gridlock.

When we arrived at the freight dock, we were surprised to find that it’s not there anymore. Well, the building was there, but the whole place was fenced in and abandoned. I called the contact number I have and found out that they moved to a new location a few weeks ago. Fortunately, it was only a few miles away and we found it easily.


We had not eaten all day, so by the time we made it all the way back to Mesa we were both more than ready for dinner. We stopped at a restaurant, and while we were eating Terry was looking around at the people seated near us. We are both people watchers, so I assumed that was what she was doing. But then she said that, since she had gone to her senior year of high school here, and lived here as a young woman when she was first having her children, she always wondered if she might bump into somebody she knew from back in the day.

I mentioned that when we go back to our old hometown of Show Low, in northern Arizona, we very seldom see anybody we know from when we lived there. Yet, I added, we can be in a grocery store or restaurant or even a roadside rest area anyplace in the country and run into fellow RVers we’ve met before, or who read the paper and blog. It’s happened to us many times. It wasn’t more than two or three minutes later that Don and Susan Jackson, Canadian blog readers, came by our table and introduced themselves! Yes, it really is a small world.

We had a visit from Santa Claus while we were eating, and the jolly visitor from the North stopped by our table to say hello. Since Terry has been a very good girl, she even got her picture taken with Santa. How cool is that? 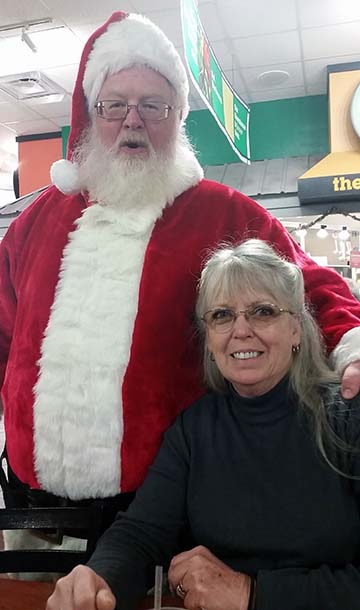 Today, the game plan is to get some more writing and weaving done. But we all know what happens when you make a plan, don’t we?


And finally, please remember that this blog is an Amazon affiliate. When you order something through any of our Amazon links, it doesn’t add anything to your cost, but we do earn a small commission on everything you buy, which helps pay for the time and expense of publishing the blog. Just click on an Amazon link, then shop as usual.

Thought For The Day – I was standing in the park wondering why Frisbees get bigger as they get closer. Then it hit me.

8 Responses to “She Was A Very Good Girl”