After spending most of Monday morning on the telephone arguing with the idiots at Temecula Valley Hospital to get them to release my records to the VA hospital in Tucson that they were supposed to do last week, they finally got off their lazy butts and did something and sent the records late on Monday, only three days after my appointment with my doctor in Tucson.


Several people have blamed the VA on this, but it’s not their fault. It’s all about the idiots in California. When I tried to get the records myself after being released from the hospital, they said it would take two weeks but assured me that they could fax them to the VA in time for my appointment last Friday. Of course, that never happened. After talking to them two or three times Monday, they decided that they couldn’t fax the records to my doctor because they didn’t have her fax number. I pointed out that yes, they did, it was in big bold letters and underlined on the release of information form I sent them. Then they said they had to verify that was the correct number. I told them it was, but they would not take my word for it and said the VA had to call them and tell them it is the correct number. This is all to “protect my privacy”. How about we protect my health instead? What lunkheads!

Our time at Voyager RV Resort was up yesterday, and we had reservations in Apache Junction, so we left about 10:30, made a quick stop to top off our fuel tank at the Pilot truck stop, and headed north.


Whenever possible, we like to get off the interstate highways and take the two lane roads, so we took State Route 77 north out of Tucson to State Route 79, and followed it another 60 miles or so to Florence Junction, where we picked up US Highway 60 and took it into Apache Junction. State Route 79, also called the Pinal Pioneer Parkway, is a great drive through the desert. 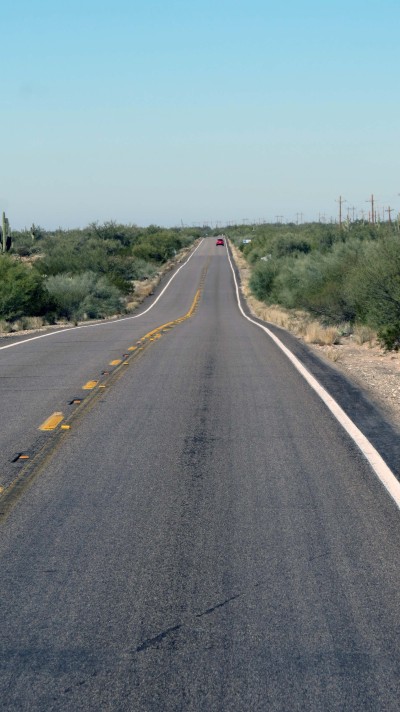 We always like seeing the different shapes of the saguaro cacti along the way. 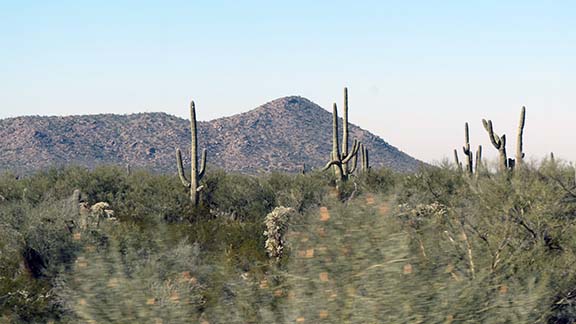 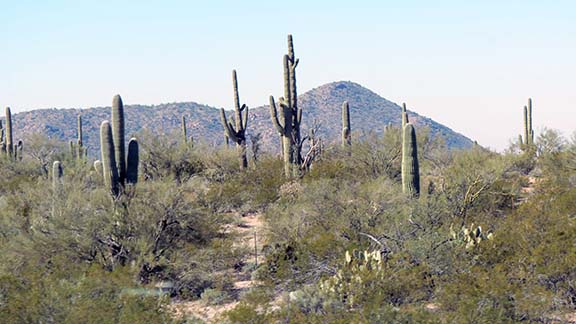 From Florence Junction, it was only another 18 miles to our RV Park in Apache Junction, but it was the longest part of the trip. Somewhere around Gold Canyon we ran into a massive traffic jam that took forever to get through. It took us almost two hours to go three miles. And of course, the situation wasn’t helped by the fools who were driving on the shoulder trying to get ahead and then trying to force their way back into the traffic lanes. Where’s a cop when you need one? I guess it could have been worse. At least we had our own bathroom with us. 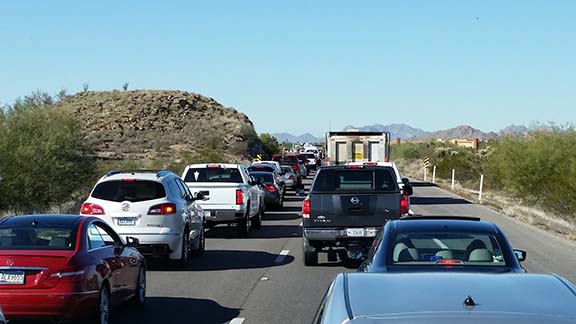 We finally arrived at Santa Fe RV resort, where we will be for most of December. I say most of December, because even though we reserved for the entire month, we actually have to be back in Tucson on the 28th for more medical stuff, including a couple of appointments and then an MRI on December 31. What a way to spend New Year’s Eve! But that’s fine, the sooner we get all this nonsense behind us the sooner we can head for Florida.


Thought For The Day – If my memory were any worse, I could plan my own surprise party.

6 Responses to “A Long Traffic Jam”