Did you know there are three kinds of bees in the world? There are worker bees, drones, and the queen bee. The queen bee has it made. The rest of the bees in the hive are born to serve her. After all, she’s the queen, right? The worker bees are other female bees who do the grunt work. They’re busy all day long collecting pollen and hauling it back to the hive to make honey. And it’s not a union job! No days off, no holidays or weekends, just work, work, work.


Now the drone, that guy’s got it made. He’s on permanent vacation. All a drone does is hang out in the hive all day long eating and waiting for his one mission in life, to mate with the queen bee. Sure, he dies immediately after that, which kind of sucks, but up ’till then life is pretty darned good for a drone.

Well, at least for that kind of drone. But today we’re going to talk about a different kind of drone, my DJI Phantom. I’ve wanted one of these high tech quadcopters for a long time, so after much internal debate and talking myself out of it several times, I finally gave in and bought myself one for my birthday a couple of weeks ago. Well, actually I bought it to take aerial photos with my GoPro camera to use in the blog and the Gypsy Journal. Yep, that’s why I got it. Just ask my accountant. 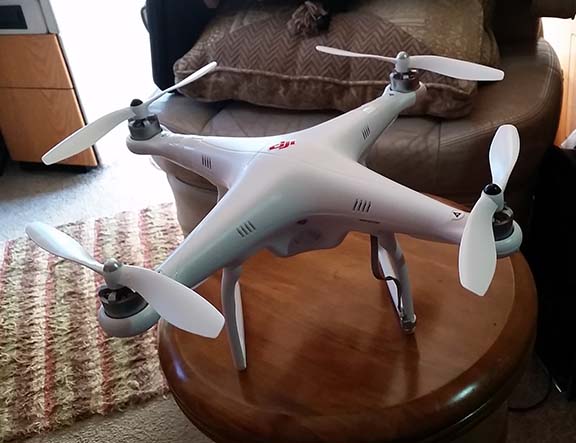 Of course, right after I got it the weather turned ugly up on the Oregon coast, so I did not get to fly it until yesterday, here at Nancy Kissack‘s place in Atwater, California. And I have to tell you, I’m impressed!


I didn’t attach the GoPro for my first flights because I was pretty sure I’d crash a time or two. Or three or four. And I did. But that’s okay, this thing seems to be bulletproof. Or at least Nick-proof.

It takes off and shoots straight up into the sky, and though the legal limit for flying one is 400 feet, in one You Tube video I saw a fellow strapped an altimeter to his and took it up over a mile. Unfortunately, those are the kind of guys who have caused the FAA to announce that they want to require drones to be registered. A few always spoil things for the majority in life. 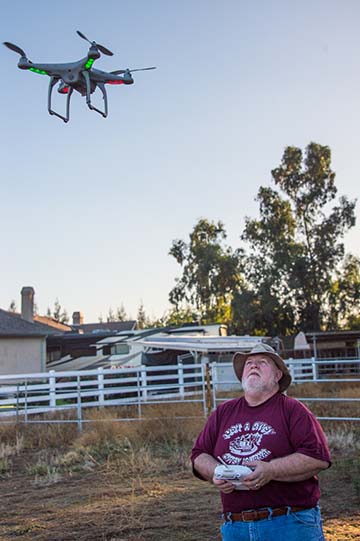 And the cool thing is that this drone has a GPS and a Home feature that means that if something goes wrong and it loses radio contact with the handheld transmitter you control it with, it automatically flies back and lands right where you launched it. How cool is that? 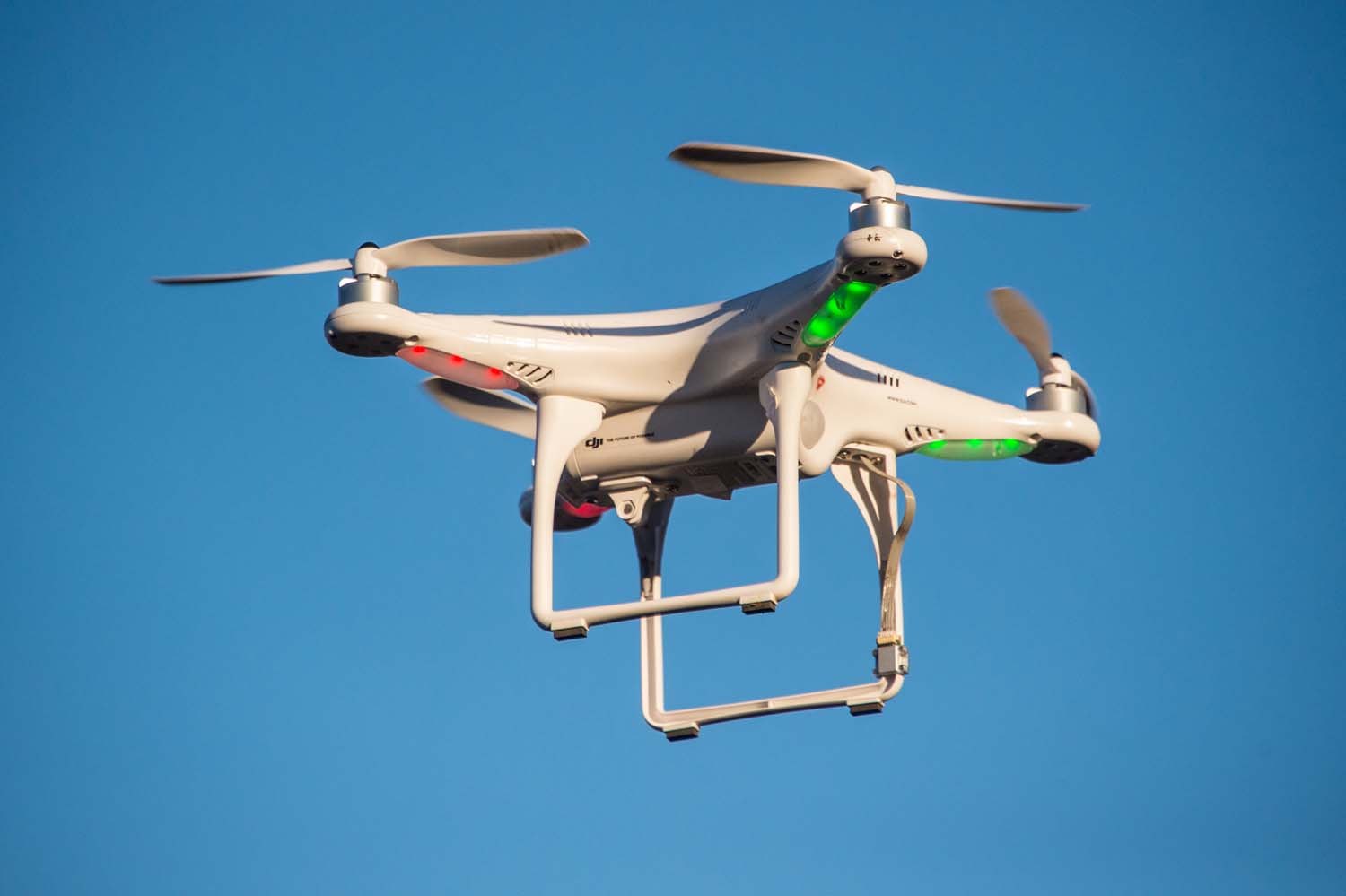 It’s very fast. It will fly at 22 miles per hour. But speed isn’t everything. It also has a hover feature, so I can put it where I want it in the air and just take my fingers off the controls and it will stay right there. That’s a great feature for aerial photography. Battery life is about 10 – 15 minutes without the load of a camera mounted on it, which doesn’t seem like a long time, but it really is when you’re flying. It came with one battery, but I ordered two spares to extend my flying time. 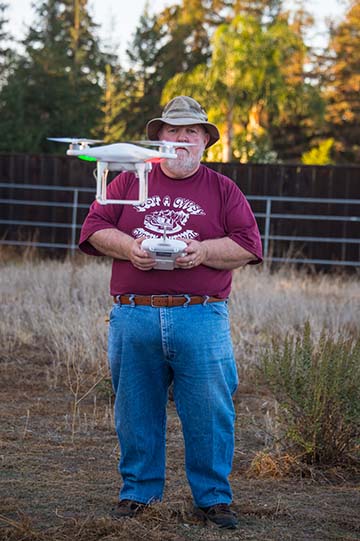 I started by just simply going up and down and hovering, not taking it up more than maybe 20 or 30 feet, then I flew it around Nancy’s horse corral, went higher a few times, and crashed several times upon landing. The crashes were all the result of the same thing, coming down too fast, hitting the ground, and bouncing. I seem to remember doing that a few times when I was learning to fly a Cessna, though fortunately, no actual crashes were involved then. But I do remember my instructor requesting that I only make one landing per flight.

Like I said, the Phantom is a solid machine. It hit hard several times and kept right on flying. In one hard landing I bent one of the plastic propellers, but Miss Terry was able to bend it back into the right shape and I got the drone up in the air again.

When the flying was done for the day, Nancy made us another nice dinner. With Terry chasing the drone when I crashed it, giving me a haircut and trimming my beard, and then doing the laundry, and Nancy feeding me, I’m beginning to feel like one of those other drones I told you about. So I guess the good news is, if there’s no blog tomorrow and you hear I have passed on, it means I got lucky.


And here’s the queen bee around here. This is Jonathan, Nancy’s 40 year old yellow headed parrot. Jonathan is actually a girl, and a talented one at that. She can dance, she does a great Stevie Wonder imitation, she knows several words, and loves to talk. She really seems to have taken a liking to me and when she hears my voice she starts chattering away and dancing. If I put my face next to her cage she sticks her beak through the bars and gives me kisses. Nancy took her out of the cage and she immediately crawled up on my shoulder and stayed there nuzzling me and kissing. Well, yeah, she pooped a time or two, but sometimes I have that affect on the female population, and Jonathan is not the first yellow headed lady to crap on me. You have to take the bad with the good. 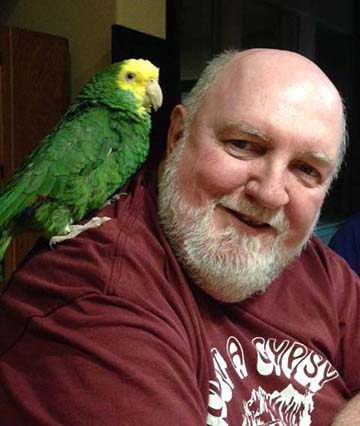 Today is your last chance to enter our Free Drawing for an audiobook of Big Lake Lynching, the second book in my Big Lake mystery series. To enter, all you have to do is click on this Free Drawing link or the tab at the top of this page and enter your name in the comments section at the bottom of that page (not this one). Only one entry per person per drawing please, and you must enter with your real name. To prevent spam or multiple entries, the names of cartoon or movie characters are not allowed. The winner will be drawn this evening. 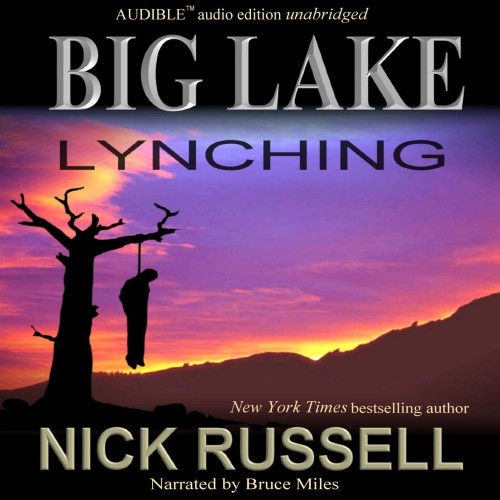 Thought For The Day – I don’t smoke but I have a big ashtray in case the house burns down.