I had another rough night Monday night, so when we got out of bed at 7:30 yesterday morning I wasn’t ready to start the day. But we had to get some miles put behind us, so I only sniveled a little bit as I got dressed and we started getting ready to hit the road.


It was a pleasant morning and it didn’t take me long to check the air pressure in all of our tires and get the campground utilities unhooked while Miss Terry was doing the last minute chores inside.

This is where our friends Orv and Nancy Hazelton live, whether on their lot at Jojoba Hills, or on the road exploring America. I think they have one of the nicest lots in the park. 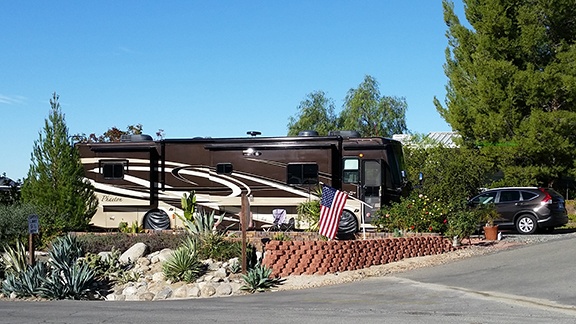 With everything ready to go, we pulled out of our site and went up the hill past the clubhouse where there was a wide area where I could turn around, and Terry pulled in behind me with the Explorer so we could hook it up to our Blue Ox Aventa tow bar. We’ve done this hundreds, if not thousands of times before with never a problem. But we broke one of the cardinal rules of RVing when we allowed someone to come up and chat with us while we were doing everything. That always leads to problems, and sure enough it did!

Terry stood behind the Explorer and I got back in the motorhome to do a light check, and once that was done I began to pull forward to make sure the tow bar was fully engaged when I saw Terry waving her arms frantically to make me stop. I hit the brake pedal and immediately felt a big thump as the Explorer hit the back of the motorhome. Somehow we had gotten distracted and only hooked up one arm of the tow bar. The other was merely sitting on the bracket on the SUV and fell down as soon as I started moving. When I stopped, the Explorer rolled diagonally forward and gave me a rude reminder of what negligence can do to you. Fortunately, the damage wasn’t too bad, just a small hole in the fiberglass lower bumper of the Explorer. Things happen, you live and learn.


Going down the hill to Temecula wasn’t nearly as bad as going uphill had been, or maybe I was so eager to get the hell out of there I didn’t notice. But at any rate, before long we were on Interstate 15 northbound for a couple of miles until we picked up Interstate 215 and took it northeast. 30 miles later we got onto State Route 60, a divided four-lane road, and took it 20 miles east to Interstate 10. Almost immediately after getting onto 60 we started running into heavy traffic. And it continued all the way to the interstate, sometimes slowing down to a stop and go rate for miles at a time. 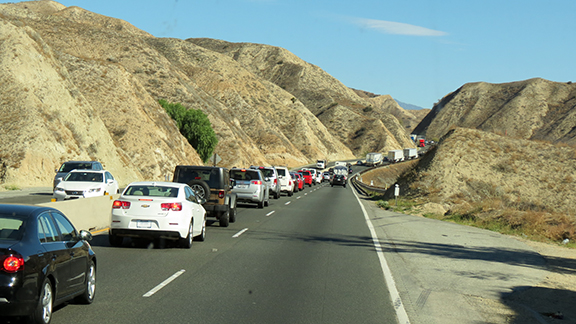 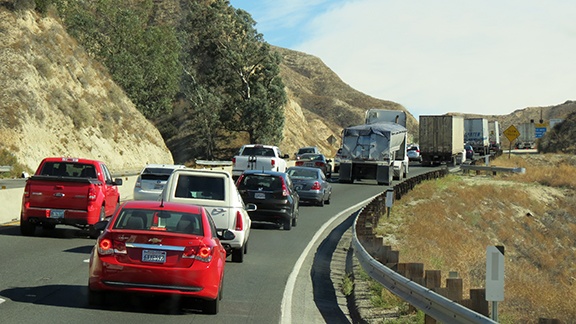 Staring at the back end of a semi-truck for mile after mile can be boring, but at least this driver had the courtesy of providing some artwork to look at. I don’t know if you can zoom your screen in, but I’m not sure what message this She Devil was sending. 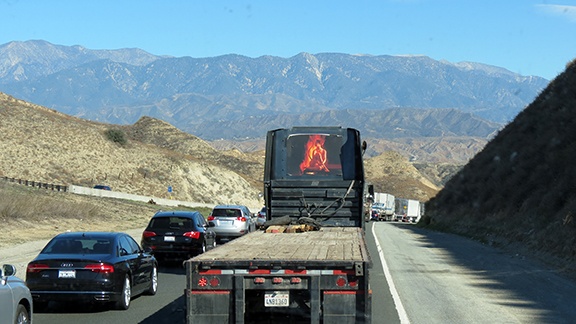 Traffic on Interstate 10 was just as heavy, but moved along pretty well and there were more lanes to divide it up into. Before long we started seeing windmills. 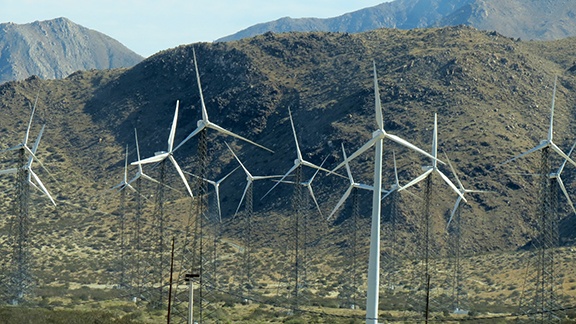 Lots and lots of windmills. I couldn’t help wondering what I could do with one of our Revolution kites with that kind of wind. 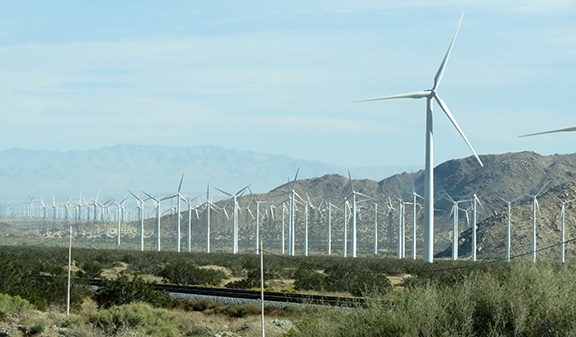 Maybe I shouldn’t have been so smart-alecky about the She Devil, I think she sent somebody to keep an eye on me. Do you see the scary face in the back of this trailer? What kind of demon is that? 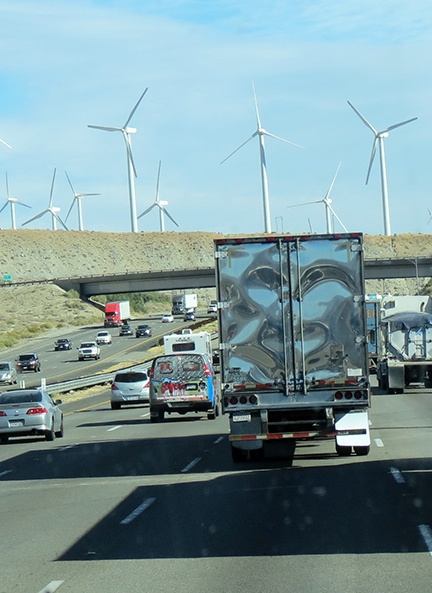 Eventually we made our way into Arizona and I don’t think I’ve ever been so glad to see the Grand Canyon State before. Like I said in yesterday’s blog, we’re just not Southern California folk.


17 miles after we crossed the state line we left Interstate 10 in Quartzsite and stopped at the Pilot truck stop for fuel. Folks, there’s a reason some truckers don’t like RVers. And the reason is we have some jerks among us. All of the fuel islands were busy and backed up, so we took our place in line behind an eighteen wheeler, who was waiting behind a big diesel pusher motorhome at the pumps. And we waited, and we waited, and we waited some more. Meanwhile, the trucks on both sides of us were moving forward, fueling up and leaving, and being replaced by more trucks. And still we sat there waiting.

Eventually a very large woman with her arms full of junk food waddled out of the truck stop and to the motorhome and crawled inside, and immediately it pulled away. There was no time for her to have dropped all of her stuff, got into the driver’s seat and pulled away, so obviously there was somebody behind the wheel all that time. But instead of pulling forward after he had filled his tank to the designated mark to clear the pump for other customers, he just sat there. You can have the biggest, fanciest Class A motorhome on the road, but if you don’t have any class yourself you’re still just a jerk.

With our fuel topped off, it was only another two or three miles to the private lot where our friends Butch and Fonda Williams are parked for the winter. Once we got there and backed into our site for the night Butch set right to work removing our faulty fuel door lock. He discovered there was some corrosion inside of it and told me he was going to take it apart and get it working right, and reinstall it this morning so we can get back on the road to Tucson. Or at least that’s what I think he said. By the time we got here I was feeling pretty crappy again and I don’t think I understood more than half of what was said to me. Hopefully today will be a better day.

Thought For The Day – Forgive your enemies; it messes up their heads.

6 Responses to “Devils, Demons, And Jerks”