We love exploring America’s back roads and small towns and finding overlooked gems that the tourist brochures never cover. In a series of weekly blog posts we will be sharing some of America’s lesser-known small town museums, historic sites, and oddball attractions, on a state-by-state basis. We don’t have room to cover each and every attraction in every state, but hope to give you some ideas for places to see in your travels.
AdSense


Abercrombie: Fort Abercrombie State Historic Site preserves the historic Army fort that was under siege by the Sioux in 1862. Fort Abercrombie was the first permanent military fort established in what was to become North Dakota, and was known as “the Gateway to the Dakotas.”

Alexander: Housed in a 1914 school building with original furnishings, the Lewis and Clark Trail Homestead Museum exhibits include a scale model of Fort Mandan, where Lewis and Clark spent the winter of 1804-1805, as well as saddles, cars, and machinery from homesteading days.

Center: Fort Clark Trading Post State Historic Site is one of the most important archeological sites in the state because of its well-preserved record of the fur trade and of personal tragedy. More than 150 years ago it was the scene of devastating smallpox and cholera epidemics that decimated most of the inhabitants of a Mandan and Arikara Indian village.
AdSense


Fargo: The Roger Maris Museum in Fargo honors the New York Yankee outfielder, who came from Fargo. Maris is best known for hitting sixty-one home runs in 1961. His “61 in ’61” set a new major league record, breaking Babe Ruth’s previous mark of 60, set in 1927. 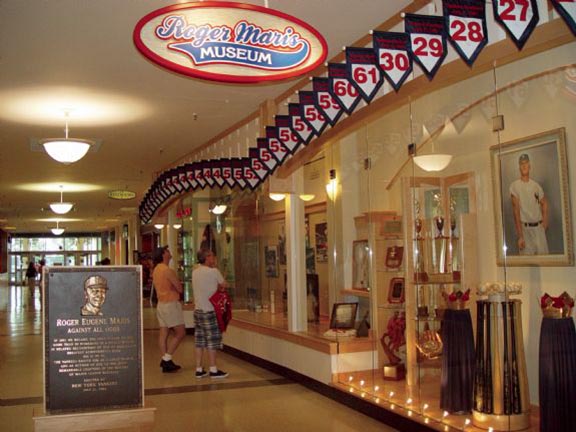 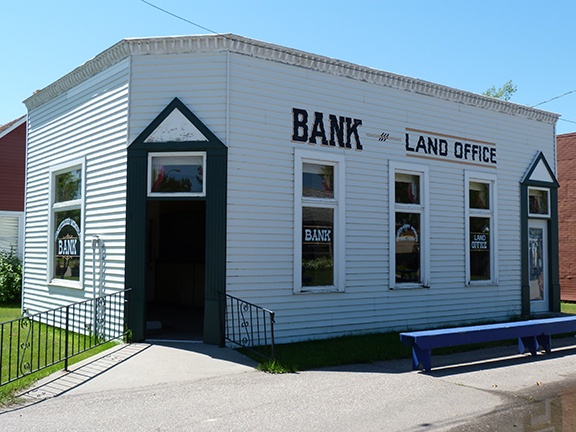 Jamestown: The American bison was sacred to the Indian people and provided most of what they needed to survive. This noble animal is honored at the National Buffalo Museum. 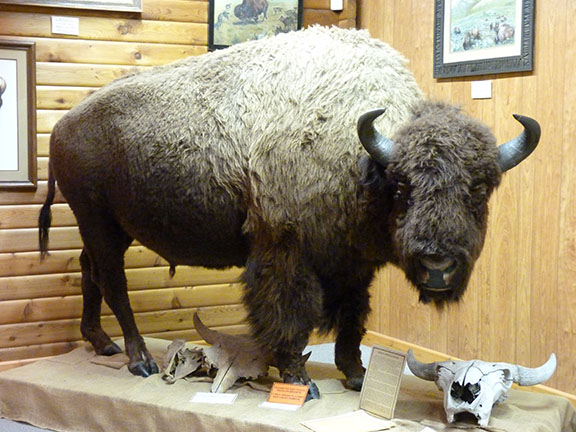 Kulm: The Whitestone Hill Battlefield State Historic Site, located 23 miles southeast of Kulm, marks the scene of the fiercest clash between Indians and white soldiers in North Dakota. On September 3, 1863, General Alfred Sully’s troops attacked a camp of Yanktonai, Dakota, Hunkpapa Lakota, and Blackfeet as part of a military mission to punish participants of the Dakota Conflict of 1862. In the ensuing battle, many Indian men, women, and children died or were captured. Military casualties were comparatively light. The Indians also saw the destruction of virtually all of their property, leaving them nearly destitute for the coming winter

Mandan: Rich in both military and early Native American history, Fort Abraham Lincoln was once an important infantry and cavalry post. It was from this fort that Lieutenant Colonel George Armstrong Custer and the Seventh Cavalry rode out on their ill-fated expedition against the Sioux at the Little Big Horn. Now a state park, portions of the military post, including the Custer House, have been reconstructed. 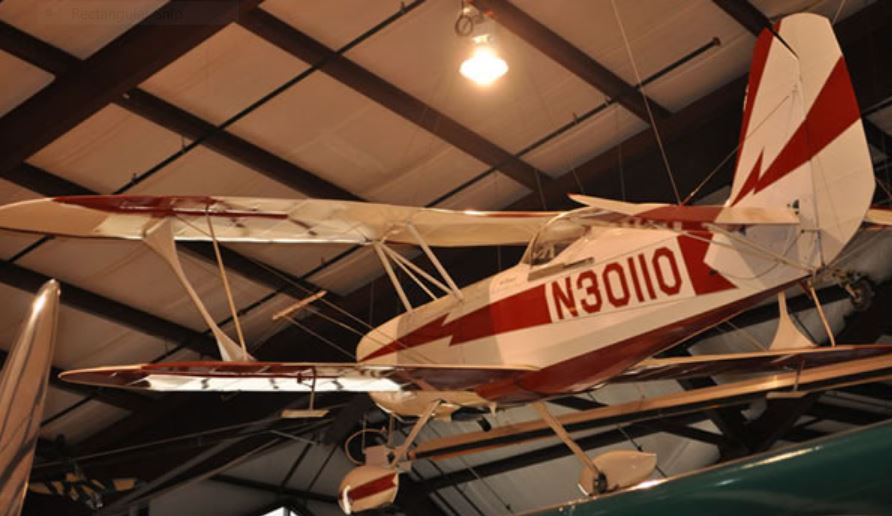 Minot: The Scandinavian Heritage Park is a tribute to the Scandinavian culture and people who settled the Minot area. The park includes buildings and statues, including a full-size replica of a Stav church, an authentic Finish sauna, a Danish windmill, and a 220-year old house from Sigdal, Norway. 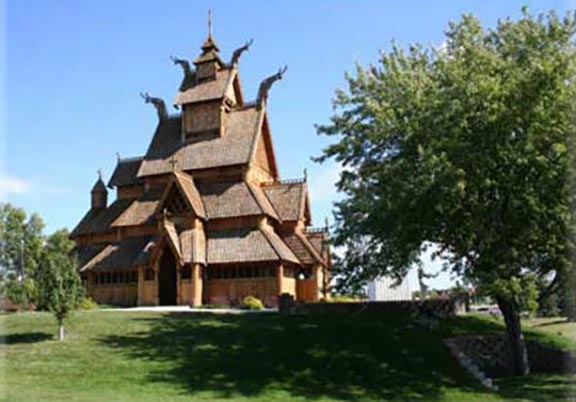 Minot: The Ward County Historical Society Museum displays a collection of preserved and restored historic buildings, vintage automobiles, along with thousands of artifacts and curios from Minot’s past. The buildings in the village include the Samuelson house built in 1912, the 1904 Immanuel Lutheran Church, an 1891 log cabin, a one room country school built in 1911, a blacksmith shop, dentist parlor, and Ward County’s first courthouse, built in 1886.

Minot: The community of Minot grew overnight with the development of the railroad, which provided for a rich history in the community. The Minot Railroad Museum displays more than 100 years of rail history, including photos, memorabilia, communication systems, and much more. The museum focuses on regional railroading from 1886 to the present time.

Parshall: The Paul Broste Rock Museum displays a huge mineral collection, with many unique specimens so rare that they can be only found at museums like the Smithsonian Museum of Natural History in Washington D.C. Some items, like the fluoride crystals in the collection, cannot be found anywhere else in the world and are considered priceless. 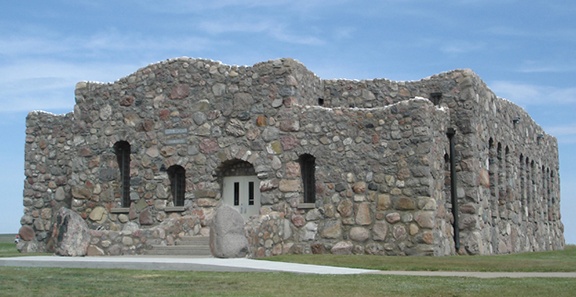 Regent: The Enchanted Highway stretches 32 miles from Interstate 94 Exit 72 to the town of Regent. Along the highway stands the world’s largest metal sculptures, a series of gigantic whimsical figures that include animals and people that will have you snapping photographs along the entire length of the route. 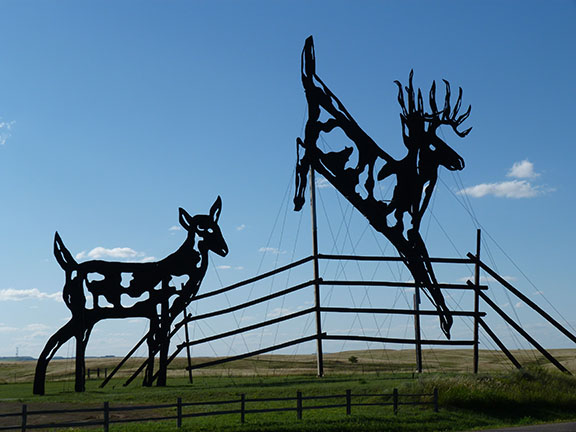 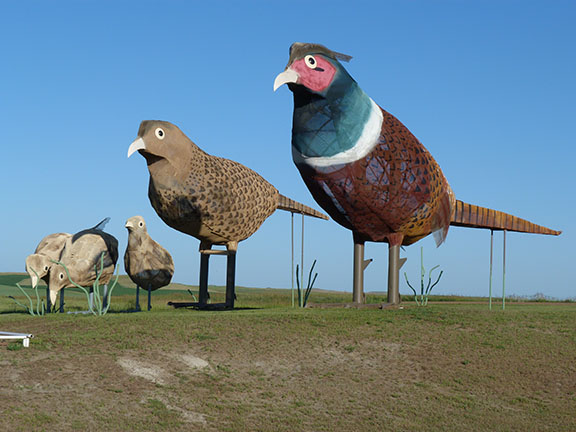 Rugby: In January 1931, the U.S. Geological Survey determined the geographical center of North America was in Rugby. The center is marked with a 21-foot tall pyramid shaped monument sitting on a heart shaped foundation flanked by American and Canadian flags. 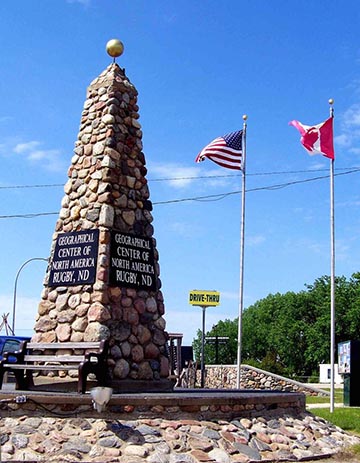 Rugby: The 88 foot tall Northern Lights Tower is an illuminated steel structure, coated with multi-colored shades of metallic paint dedicated to one of the northern Plains’ most stunning natural phenomena, the spectacular beauty of the Aurora Borealis. 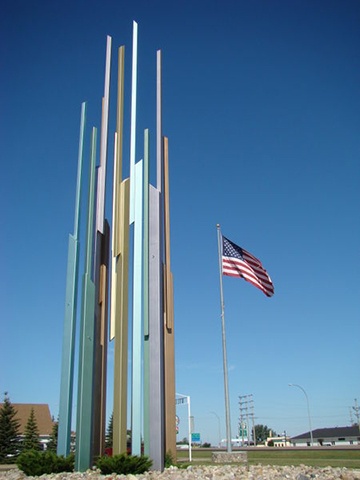 Washburn: The North Dakota Lewis and Clark Interpretive Center provides an overview of the Lewis and Clark Expedition, with special emphasis on the time spent at Fort Mandan during the winter of 1804-1805. The displays include Native American artifacts, a buffalo robe visitors can try on, and a cradleboard much like the one Sakakawea may have used to carry her baby. An authentic wood canoe carved from the trunk of a large cottonwood tree demonstrates the winter preparations the Expedition made while at Fort Mandan.

Williston: The Missouri-Yellowstone Confluence Interpretive Center tells the story of the confluence of these two mighty rivers, as well as providing the same magnificent view that Lewis and Clark Expedition members enjoyed when they visited in 1805 and 1806.


Williston: Fort Buford State Historic Site preserves the historic fort, one of a number of military posts established to protect overland and river routes used by immigrants settling the West. While it served an essential role as the sentinel on the northern plains for many years, Fort Buford is probably best remembered as the place where the famous Hunkpapa Sioux leader Sitting Bull surrendered in 1881. 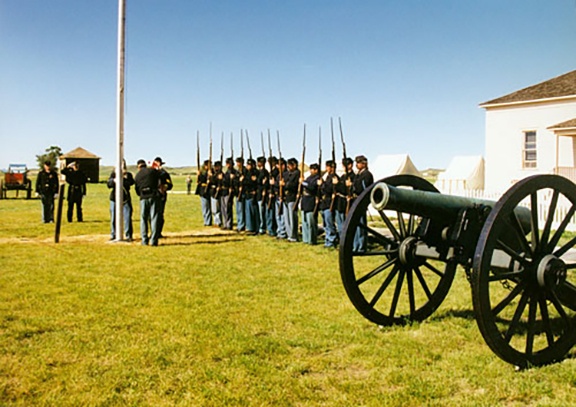 Thought For The Day – Don’t worry about old age. It doesn’t last that long.