We were up early yesterday morning to get ready for our trip to the Seaside Thousand Trails preserve. Terry had already turned the driver and passenger seats around the night before and done some other prep work. That always helps.


While she was finishing things up inside the motorhome, I walked down to the dumpster to throw some trash away and watched the maintenance guys picking up a bunch of spilled garbage from people who were too lazy to actually open the lid of an empty garbage can and put it inside, so they just set it on top. Sometime during the night an animal got into the bags and spread trash everywhere. I’ve never understood people and trash in RV parks. How many times have you gone to the dumpster and found the front overflowing, while the back is empty? How much effort does it take to throw your trash to the back?

Back at our RV site, I dumped our holding tanks while listening to the neighbor cuss his wife out. These weren’t the same neighbors that had the drunken fight Friday night; they left on Sunday. This was somebody else. Now, I don’t know how things are in that man’s motorhome, but if I would have spoken to my wife the way he did his, somebody would be carrying my fat, dead butt off to the morgue. And deservedly so. The greatest majority of RVers we have met have been wonderful people, but there are always a few jerks everywhere you go.

We left the campground about 10:30 AM with Terry behind the wheel of the Winnebago, because we were going to have to cross the Astoria-Megler bridge, and my job on bridge crossing days is to sit quietly and whimper. Which is actually an improvement over the panic attacks and sniveling I used to do.

We couldn’t see what the object of everybody’s attention was, but on the Washington side of the Columbia River there were cars lined up all along the way and people with cameras and binoculars watching something out on the water. I know there are a lot of whales just off the coast, but I don’t know if any of them actually come into the mouth of the Columbia. *Note: Just before the blog posted the local news reported that it was a pair of humpback whales.

At one point an idiot in front of us suddenly came to a complete stop in the middle of the road to rubberneck the crowd of people and Terry had to really get on the brakes to keep from running over him. Contrary to what seems to be popular belief, a 40 foot motorhome does not stop on a dime.


We started across the bridge and I noticed the construction sign, which said work on the bridge would be done in summer of 2015. But they’re not done yet and almost to the top we had to stop and wait for a flagman. There? Why there? Yeah, that’s just what I wanted to do, sit up at almost the highest point of the bridge and wait while the motorhome rocked as trucks went past us in the other direction. And that darn guardrail is really low! 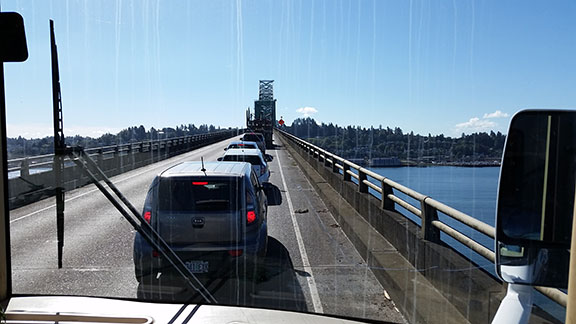 Finally we got going again,and before long we were on the Oregon side of the river. But I still think we were halfway to Seaside before the “pucker factor” let up and I could move in my seat. We got to the Thousand Trails and I checked in while Terry unhooked the Explorer from our Blue Ox towbar. We were lucky and found a site with 50 amp electric in the north campground, right across from the clubhouse. We got backed in and hooked up, and we’re home for the next three weeks or so.


It’s really starting to cool down here on the coast, with highs in the mid-60s and overnight temperatures down in the 40s a couple of nights this week. It’s still pretty hot inland, and down in California and Arizona where we’ll be headed when we leave Oregon. In the meantime, we’re hoping for some more kite flying weather before we leave the beach behind us.

Thought For The Day – It doesn’t matter how big your RV it is or what it cost, the view out the windshield’s the same.