Nick's Blog » Life Had Other Plans

Yesterday was a cold, dreary day here on Washington’s Long Beach Peninsula, and I had hoped to spend it writing while Terry was weaving. But life had other plans for us. Monday evening Terry washed the dinner dishes with no problem, but at bedtime we could not get more than a trickle of water from our hot water faucets or in the shower.

There are not a lot of places to get parts here, and nobody had the check valve, but I did find a straight piece of plastic pipe that did the job at a small hardware store.

We’ve also had a problem with the check valve in our fresh water inlet; any time we are not on shore water and are using our water pump, it would back-feed water out of the inlet. As it turns out, a small RV parts place called Active Enterprises in Long Beach did have a replacement water inlet with the check valve, so I got that, too. 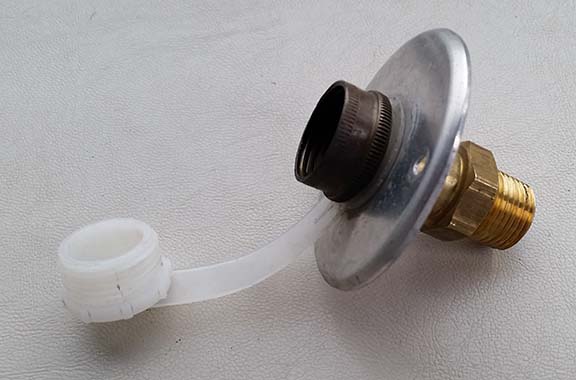 Back at the campground in a heavy mist Terry and I spent the next couple of hours replacing the check valves. To get to the fresh water inlet we had to take two metal panels off in our plumbing bay, which seemed to have about 500 screws, some of them hard to access. The check valve for the water heater was easier to access, or at least to see. But it was in a small compartment with the water pump and a lot of sharp edges.

It took a couple of attempts to make sure everything was tight enough not to leak, and I’m sure glad Terry is the kind of woman who isn’t afraid to get her hands dirty, because

mine were so sore that I couldn’t tighten everything up properly. The last couple of days of cold and rain have taken their toll. With everything put back together, we now have hot water again, and when we ran the water pump, the back-feeding problem at the fresh water inlet had been solved. Two jobs well done, thanks to Terry.

While I was our getting the parts, somebody came by to tell Terry that due to a fire in some condos near the campground, the local power company was shutting off electricity to make repairs. It was off for about five hours, so once we were done with the check valves, I took a nap instead of writing. When I woke up it was getting pretty chilly inside the motorhome, so I fired up our Onan generator and we put the furnace on for a while while Terry finished putting dinner together.


My pal Bobbi Holmes has just released the fifth book in her excellent Haunting Danielle cozy paranormal mystery series set in a bed and breakfast on the Oregon coast. Check out The Ghost of Halloween Past , it’s a fun read.

Thought For The Day – Happily ever after is not a fairy tale, it’s a choice.

2 Responses to “Life Had Other Plans”