Yesterday morning we set what is absolutely a new record for us for getting on the road in the morning, and it sucked. I never want to do that again!


Monday night we turned off the bedroom TV at 12:30, which is early for us, because we wanted to get an early start on our short trip to the Long Beach Thousand Trails. I woke up at 3:30 to go to the bathroom and stepped onto a soggy throw rug in the water closet. Uh oh.

The rug was completely saturated and the rest of the floor was wet, but the water had not spread out past the water closet. Apparently, when the toilet was flushed just before going to bed the foot pedal hung up just enough to allow water to continue to trickle into the bowl until it filled it and overflowed. Fortunately it was clean water and not black coming up from the tank.

By the time we got that cleaned up we were both wide awake, and though we went back to bed, we never did get back to sleep. We tossed and turned until about 5:45 and then gave in and got up. And since we were up anyway, we decided to get on the road. It was 7:41 when we pulled out of the Seaside Thousand Trails.

Terry drove the 32 miles to Long Beach, since four of those miles were over the Astoria-Megler Bridge that crosses the Columbia River. This bridge scares the hell out of me, but fortunately I’m married to a woman who can face all kinds of terrible things with a smile. I mean, after all, she sees me naked. And not only does she smile, sometimes she points and laughs!

They are painting the bridge and it is down to one lane on the Oregon side. We had to stop for a flagman for a couple of minutes and then he waved us on. 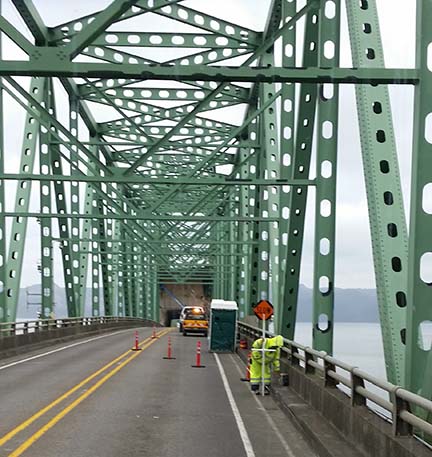 It was a bit of a tight fit between the equipment on the right and the worker on the left, but Terry did just fine. 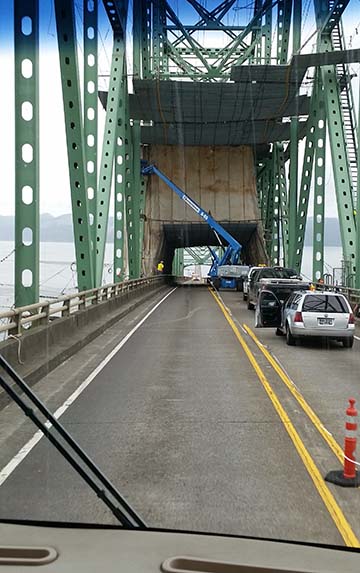 And then we began the steep downgrade to where the bridge levels out across the river. And I didn’t snivel even once. At least, not out loud. 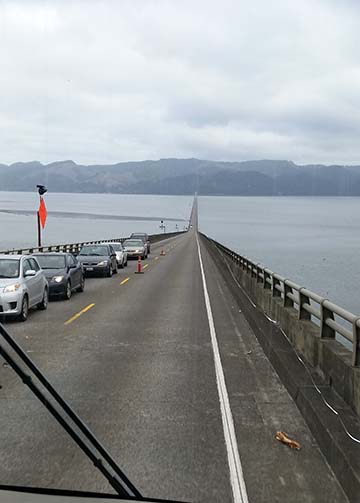 We arrived at the Long Beach Thousand Trails about 8:30 and checked in. Nancy Kissack had told us about a great site two spaces from her that was due to become available, and we were happy to find that the folks in it were just about to leave. And even better, it was blog reader Linda Rees and her hubby, who we had seen a few weeks ago at the South Jetty Thousand Trails in Florence, Oregon. By 9 a.m. we were parked, hooked up, and settled in. That’s at least an hour before we usually even wake up in the morning!

But it was worth it. This is a busy park and it fills up really fast. We’ve got a great full hookup 50 amp site with a great view of the sky for our satellite TV dish, and super fast 4G Verizon service.

There is an open field across from us where toads are parked, and we’re about a half mile from the beach as the crow flies. Close enough that the sound of the surf will lull us to sleep at night.

I spent some time answering e-mail, but by noon I could hardly focus on the screen so I took a nap. When I woke up I did some writing until Nancy came by and we decided walking down to the beach to fly kites was a good idea.

It was Terry’s first time flying her new Revolution kite. This is a model called a New York Minute (NYM), and she said the difference between it and the entry level EXP she has been flying was like night and day. The NYM is extremely responsive and smooth, and we spent close to three hours having a wonderful time. 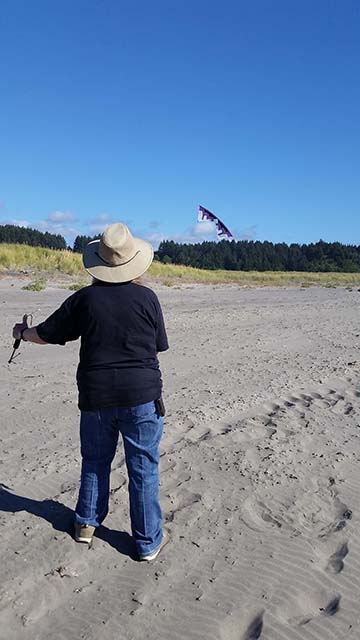 Eventually the wind died down and we rolled up the kites and began the long trudge back to the campground. I said we’re a half mile from the beach, but the trail through the sand and pine trees is probably half again as long. Kite flying is good exercise, and the walking back and forth to the beach through the sand sure has to help, too!


After driving her neurotic husband across the bridge, Miss Terry deserved a treat, so I took her to dinner at a nice Mexican restaurant we’ve eaten at when we were here before called El Compadre. The food was as good as we remembered and I’m sure we’ll return in the three weeks we’ll be here. As tired as we were, it’s no surprise that we were in bed earlier than usual, I sure hope this isn’t some awful new trend.

Thought For The Day – Whoever called it necking was a poor judge of anatomy. – Groucho Marx

3 Responses to “Absolutely A New Record!”