Ever since we arrived at the South Jetty Thousand Trails preserve we’ve been pretty much stuck at home dealing with a series of leaks in our fresh water system and other issues with our motorhome. But those all seem to finally be resolved and we needed a day away, so yesterday we drove about 45 miles south to Coos Bay.

The largest city on the Oregon Coast, Coos Bay is a busy deepwater port where ships put in to load logs harvested from the surrounding thickly forested hills. It is also an important recreational headquarters with access to the Oregon Dunes National Recreation Area.

The reason for our trip was to visit a great yarn shop our friend Nancy Kissack had told Terry about. And what a find it was! My Yarn Shop is located right downtown and Terry said that in all of our travels, she has never found a shop with such a huge variety of yarns to choose from. 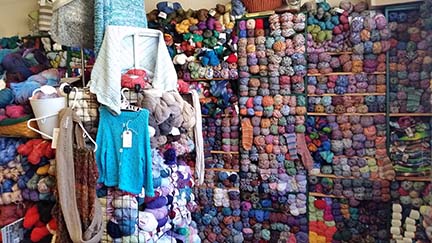 The shop has two rooms of bin after bin filled with every kind of colorful yarn one could ever hope for, including Angoras, silk blends, cottons, Merinos, Yak, bamboo, and more. Owner Judy Mogan also stocks a great selection of fiber craft books, knitting needles, and anything else you can think of. We spent well over an hour there and Terry found some great yarn for some of her projects, along with a book and some wooden knitting needles. 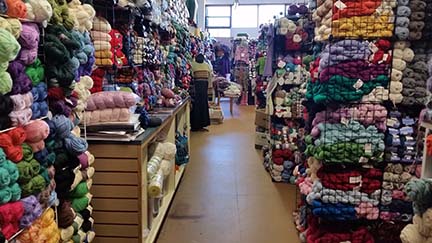 Driving back north, we stopped at the Myrtlewood Factory Gift Shop to browse for a while. Oregon Myrtlewood is a species of evergreen tree found in the coastal region of southern Oregon and northern California. Its wood is treasured for its beauty and strength and is used to make everything from burl tables to furniture and bowls. Terry found a couple of small spatulas for her kitchen. 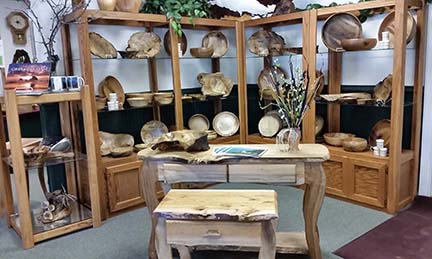 Our friends George and Diana Ruelens are camp hosting at Honeyman State Park, just a few miles south of the Thousand Trails, so we stopped to visit with them and they gave us a tour of the park. The second largest State Park in Oregon, Honeyman gets nearly a million visitors a year. It has 168 RV sites, as well as 187 tents sites and 10 yurts available for rent.

Built by the Civilian Conservation Corps (CCC) in the 1930s, the park backs up to the Oregon Dunes and has two stocked fishing lakes with canoe and kayak rentals. Three and four generations of families have made a tradition of coming to the park every summer to camp and play. 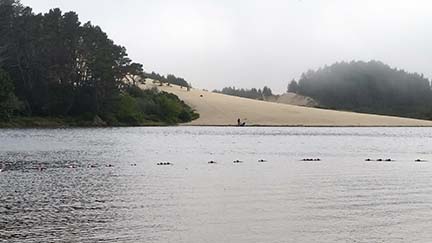 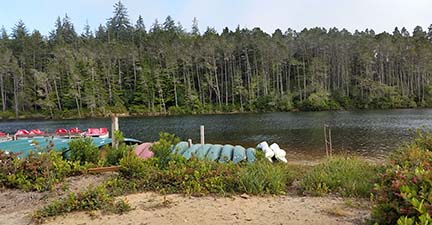 This handsome building is the Interpretive Center, originally a bathhouse built by the CCC. 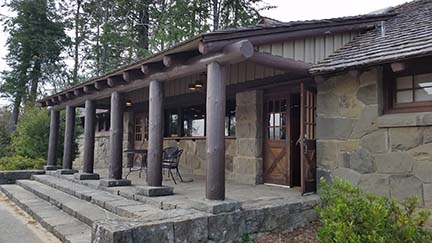 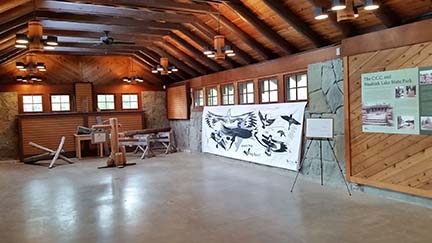 After our tour the four of us drove into town for a great dinner at Chen’s Family Dish and some fun conversation. It’s been a long time since we have been able to spend some time with George and Diana and we really enjoyed it. We hope to see them again soon.

Thought For The Day – If it wasn’t for the gutter, my mind would be homeless.

One Response to “Yarn And Myrtlewood”