Acme: At the Music House Museum you can see the world’s largest collection of mechanical musical devices.

Auburn Hills: The Walter P. Chrysler Museum documents the history and growth of the Chrysler Motor Company with exhibits of Chrysler, Dodge, Jeep and other Chrysler-brand automobiles from early days to the company’s current offerings. 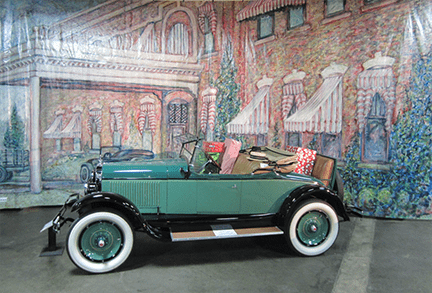 Bad Axe: You can take a peek at days long past at the Pioneer Log Cabin Village here, which includes an old log cabin, blacksmith shop, one room school, general store, and barn.

Chesterfield: Boys of all ages will love touring the Lionel Train Company here. The free one hour tour includes a ten-minute video on the Lionel toy train production process and a brief history of the company. The Center houses a 52-foot-long display of artifacts tracing Lionel’s history since its founding in 1900.

Colon: Abracadabra and shazaam! Colon is home to Abbott’s Magic Manufacturing Company and the FAM Magic Company, which have supplied magic tricks and illusions to the greatest names in magic, including David Copperfield and Doug Henning. The factory has displays of famous magicians and magic memorabilia. Colon is the Magic Capital of the World, and every August more than 1,000 magicians come to Colon to take part in the annual Magical Get-Together. 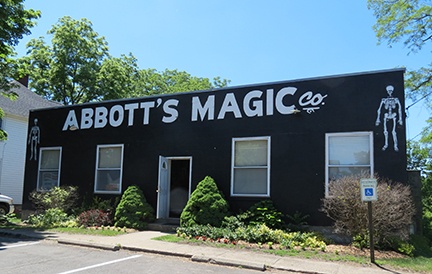 Dearborn: The Henry Ford Museum and adjacent Greenfield Village contain thousands of exhibits, including antique cars and railroad locomotives, firearms, industrial equipment, and the original homes and workshops of such notables as Henry Ford, Thomas Edison, Noah Webster, and the Wright Brothers, all moved here and rebuilt to their original specifications by Henry Ford.

Detroit: At the Motown Historical Museum you can see the old Motown recording studios, stage costumes worn by some of the greatest singers of the era, and old album covers and gold records earned by Motown’s top groups.

Grand Rapids: Former President Gerald Ford is from Grand Rapids and the Gerald R. Ford Presidential Museum includes a re-creation of the Oval Office and exhibits on his life and political career. 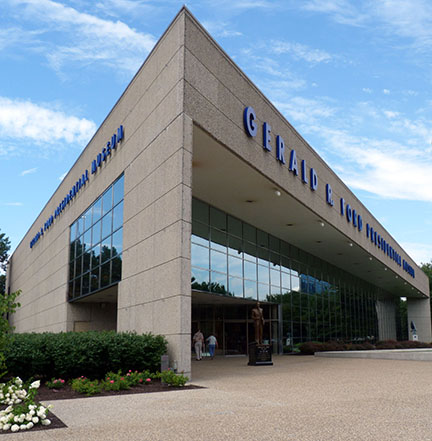 Harrisville: The lighthouse is no longer manned but the museum in the old light keeper’s house at the Sturgeon Point Lifesaving Station gives visitors a look at the dangers of Great Lakes shipping, and the men and women who dedicated their lives to making it safer. 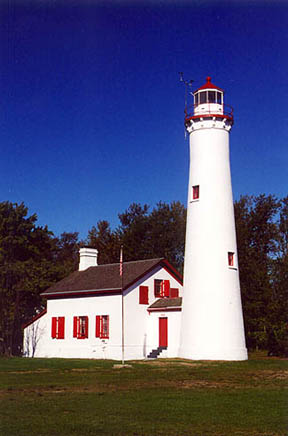 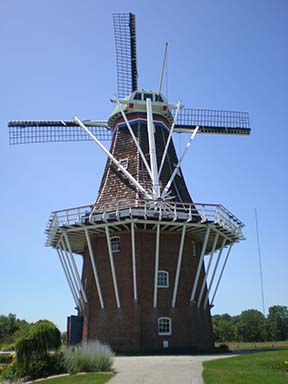 Ishpeming: Exhibits on the history of skiing are displayed here at the U.S. National Ski Hall of Fame.

Ishpeming: Visitors can explore a century old iron ore mine and learn about the history of mining on Michigan’s Upper Peninsula at the Cliffs Shaft Mine Museum.

Kalamazoo: The Kalamazoo Aviation History Museum, better known as the Kalamazoo Zoo, has a fine collection of over fifty restored aircraft including a Curtiss P-40N Warhawk, F-18, F-14 Tomcat, an SR-71 Blackbird spy plane, and an SBD Dauntless that was restored after half a century under water.

Kaleva: John J. Makinen, a native of Finland and owner of the Northwestern Bottling Works in this tiny Michigan hamlet had a surplus of soft drink bottles that were chipped, cracked or otherwise unable to be used. Throwing anything away did not set well with Makinen, so instead of hauling the bottles to a trash heap, he built a house with over 60,000 of them! Today the house is a museum and is open to visitors. 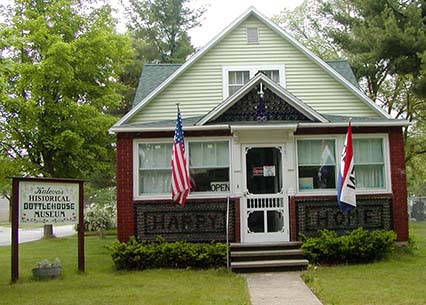 Lansing: Lansing’s role in manufacturing is preserved at the R.E. Olds Transportation Museum. Displays include automobiles, bicycles, and even airplanes built in Lansing. 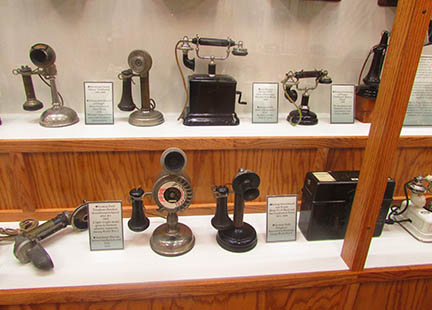 Mackinaw City: Historic Mill Creek is an operating reconstruction of a 1790s sawmill that once stood at this location.

Mackinaw City: Fort Michilimackinac is a re-creation of a 1700s French fort, with costumed interpreters and demonstrations of crafts and military skills.

Mackinaw City: Since 1889, Old Mackinac Point Lighthouse helped passing ships navigate safely through the treacherous waters of the Straits of Mackinac. Today visitors can tour the old lighthouse and lightkeeper’s quarters to learn about the role the lighthouse placed in maritime history.

Marquette: The Marquette Maritime Museum preserves the maritime history of the Great Lakes with displays of nautical equipment and a lighthouse lens collection.

Marshall: The American Museum of Magic in Marshall is the largest privately owned magic museum open to the public, celebrating magicians past and present with items dating all the way back to 1584. The museum showcases the collection of magician, writer, and historian Robert Lund. The collection contains over 250,000 pieces of magic, including illusions, posters, books, statues, and 600 old and new magic kits. 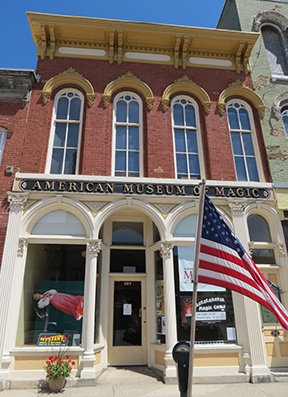 Monroe: George Armstrong Custer grew up here, and the Monroe County Historical Museum has an extensive collection of Custer memorabilia and displays that explore his early years and his Civil War achievements.

Muskegon: Step back in time and tour the World War II submarine USS Silversides and the Prohibition-era Coast Guard Cutter McLane at the Great Lakes Naval Memorial and Museum in Muskegon. 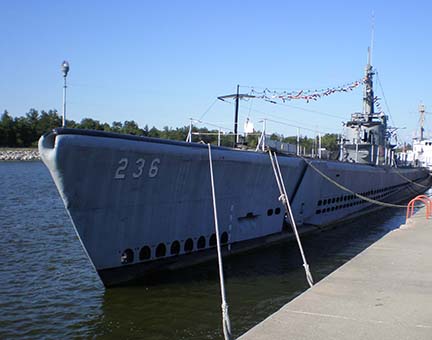 Negaunee: At the Michigan Iron Industry Museum here you can see exhibits of early mining equipment.

Novi: The Motorsports Hall of Fame of America honors the greatest of the great in auto, motorcycle, and boat racing, from A.J. Foyt to “Big Daddy” Don Garlits to Richard Petty. The museum displays a nice collection of racing cars and boats.

Port Huron: Housed in the historic Fort Gratiot railroad depot, built in 1858 by the Grand Trunk Railway, the Edison Depot Museum is the actual depot that Thomas Edison worked at between 1859 and 1863. 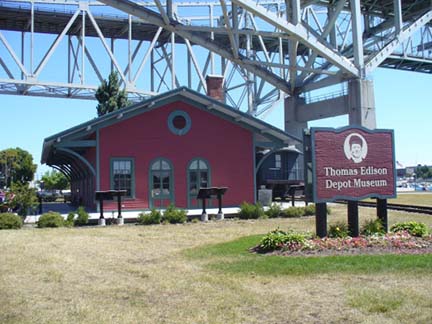 Sault Ste. Marie: The Museum Ship Valley Camp, housed in a 550 foot long freighter, is a Great Lakes maritime museum displaying information on the freighters that have worked these waters for centuries.

Sault Ste. Marie: Soo Locks Visitor Center, built by the U.S. Army Corps of Engineers, provides a viewing platform where visitors can watch ships being raised and lowered through the shipping locks. 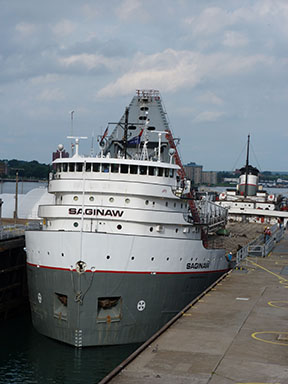 South Haven: Michigan’s exciting and often tragic maritime history is honored at the Michigan Maritime Museum with displays that include artifacts and vintage vessels.

Vulcan: At the Iron Mountain Iron Mine, five miles from town, a train carries visitors 400 feet underground through a former iron ore mine.

Whitefish Point: The sad tale of the freighter Edmund Fitzgerald, made famous in Canadian troubadour Gordon Lightfoot’s ballad, is told at the Great Lakes Shipwreck Museum, along with the tales of other maritime mishaps on the Great Lakes.

Ypsilanti: The Automotive Heritage Collection Museum displays a fine collection of automobiles including Hudsons and Corvairs.

My pal Billy Kring is one of my favorite authors, as well as one of the nicest people I have ever known. Quick, the first book in Billy’s Hunter Kincaid mystery series is currently free on Amazon. Download your copy today.

Thought For The Day – A journey of a thousand miles begins with a cash advance.

One Response to “Overlooked America – Michigan”