I mentioned the other day that we had a water leak that we could not find and that it was getting worse. A couple of blog readers recommended Morry Bernard, who runs West Coast Mobile RV Service & Repair here in Florence and is also in our RV Good Guys guide, so I knew he was somebody we could depend on to do a good job at a fair price.

I called Morry and he said he was in the Thousand Trails already and would swing by as soon as he finished his current job, which should take less than an hour. And sure enough, about 45 minutes later he pulled up in front of our site. 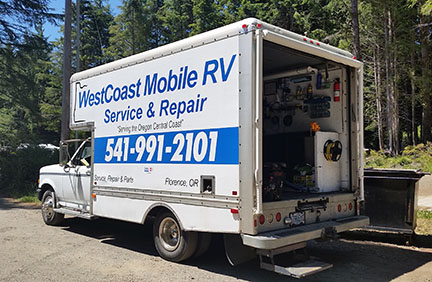 It didn’t take Morry long to find the leak, which was in the back of our water heater. I was having visions of having to buy a replacement, but once he tore into it he discovered that the plastic elbow connection where the water line goes into the water heater was the culprit and it was a quick (and much less expensive fix). While Morry was here I also had him install the new water pump we bought in Sparks, Nevada a week or so ago. It’s always good to find an honest, competent repairman, and Morry is certainly both. 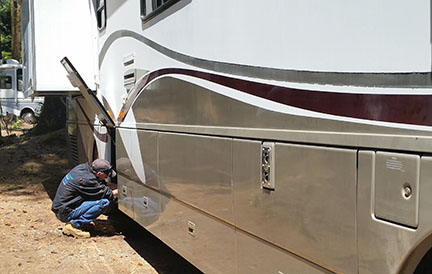 Since it was Terry’s birthday I had asked her what she wanted to do yesterday and she said we’ve been on the go so much that she just wanted a quiet day at home. So after Morry left we just hung out and enjoyed not having anything we needed to do or anyplace we we had to be.

Terry loves Mexican food and had I found a few with good reviews listed on Yelp. I asked Morry for a recommendation and he said Los Compadres, a small place where all of the locals went. He said it wasn’t fancy but that when you went there it was like having dinner at the owner’s house. That sounded like our kind of place, so about 5 p.m. we drove into town for dinner. And what a treat it was! 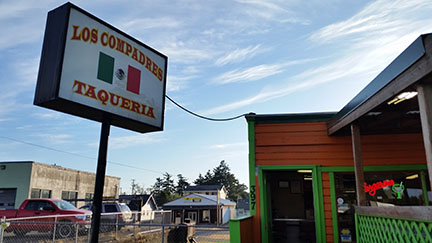 Los Comprades is little hole in the wall place that serves some of the best old style real Mexican food we’ve had anywhere in the country. Terry’s tamale and chili relleno combination plate was huge and delicious, and my crab enchiladas were worth a trip to the coast all by themselves. The great friendly service and outstanding chips and salsa just added to the experience. After one bite Terry told me we would definitely be going back there again before we leave town! 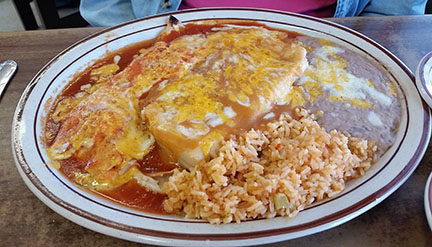 After dinner we spent a few minutes trying to find a geocache just down the road, and failing that we drove to the Oregon Dunes National Recreation Area to check it out. The dunes stretch 40 miles down the coast all the way from Florence to North Bend. They are popular with ATV riders, kite flyers, and anybody who wants to enjoy some beautiful scenery. We parked on the bank of the Siuslaw River and spent some time watching the birds and water and just enjoying being together.

Driving back to the campground, we stopped to admire these deer, who stared at us for a moment and then went back to having their dinner. 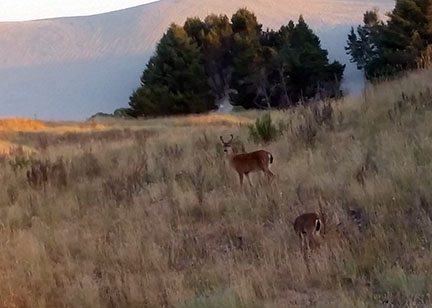 Back at home, we had a quiet evening, just like our quiet day had been, and just the way Terry wanted to spend her birthday. And before I close, she wanted me to thank you all for the blog comments, Facebook greetings, and e-mails. You all made her feel very special.

Good news for fans of my friend Ben Rehder’s Blanco County mystery series! Ben just released Bum Steer, the ninth book in his excellent series. Besides Amazon, it will also be available in a variety of other formats, including Nook, Kobo, iBooks, and more.

Thought For The Day – I’m not dumb, I just think less to avoid all the headaches.

4 Responses to “One Problem Fixed”