We had a short trip in terms of miles yesterday, but it wasn’t a fast one. We left the Elks lodge campground in Eureka, California, stopped for fuel, and then took U.S. Highway 101 north for 115 miles.

As it is through much of northern California, some parts of the highway are divided four lane road, with the requisite construction zones, and other sections are rather narrow two lane. 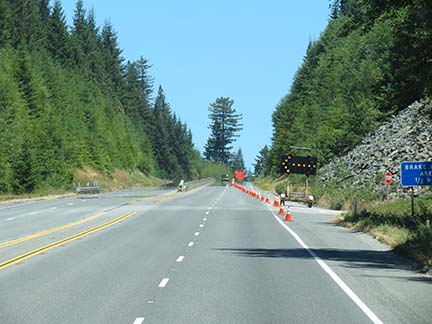 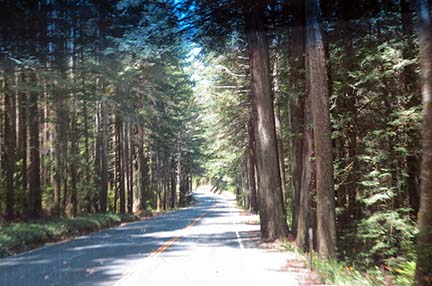 And all of the sharp curves along the way keep anybody driving a big rig on their toes. 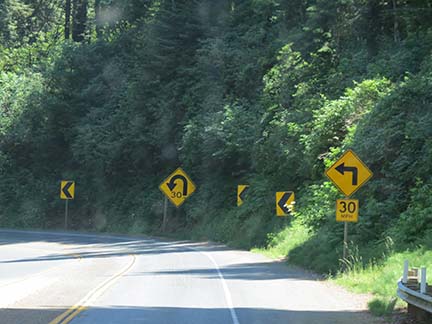 Unfortunately, that had no effect on some of the cars who zipped past in no passing zones and on curves like the rules of the road don’t apply to them. There are a lot of passing zones along the way, and we pulled off whenever we could to allow traffic to get past us.

For much of the trip it was foggy and in a couple of places visibility was reduced, slowing us down even more. 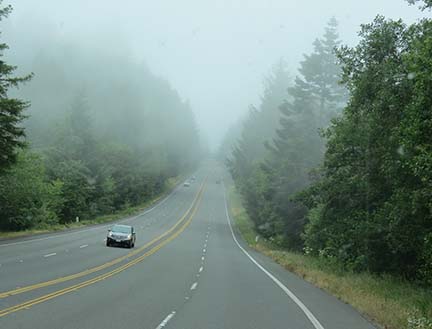 In other areas the sun was shining brightly and the views were spectacular. 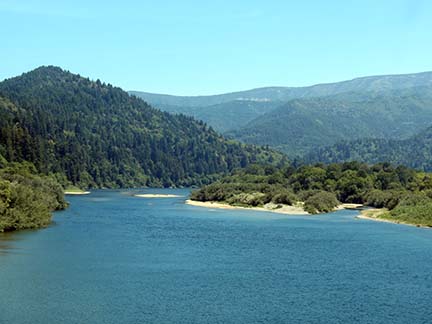 Somewhere around Orick we got our first gray views of the Pacific Ocean. 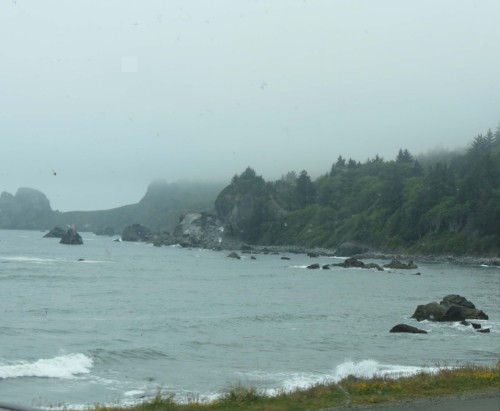 In Klamath we passed the Trees of Mystery, a popular attraction where visitors are greeted by 49 foot tall Paul Bunyan and Babe, his trusty Blue Ox. At 35 feet tall to the tip of its horns and weighing 30,000 pounds, Babe is no baby! 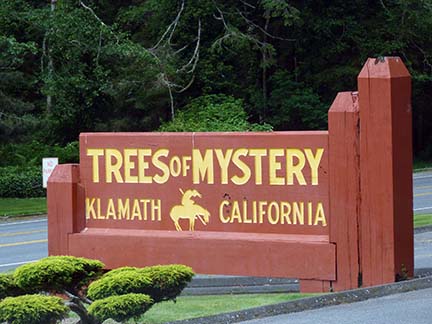 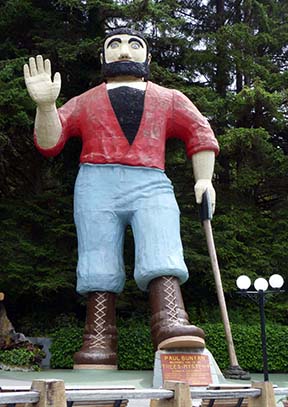 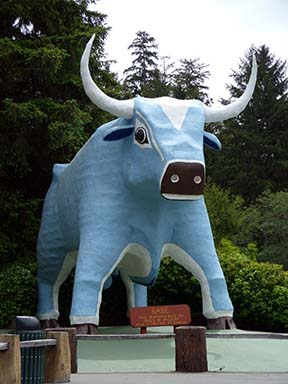 When we stopped here a couple of years ago we were surprised to find the attraction has an impressive collection of Native American artifacts on display. 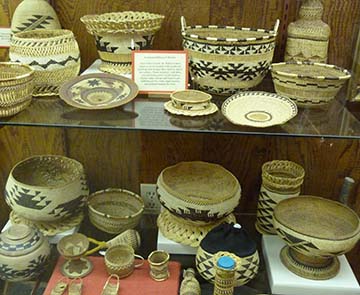 Eventually we crossed into Oregon, home to the most beautiful coastline in the entire country, in my opinion. 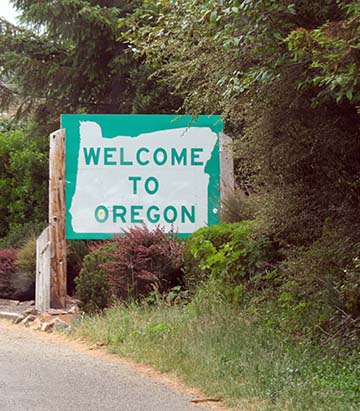 Almost three hours after we left Eureka, we arrived at the Elks lodge in Brookings and got a back in RV site with 30 amp electric and water. The lodge has a dump station and even a small laundry room for RV visitors. There is also free WiFi. Not a bad deal for $18/night.

As I reported a few days ago, our 50 amp plug has been acting up and I suspected a short inside of it. When we got the lodge it was on the fritz again, so Terry and I took it off and replaced it. One less hassle to deal with. 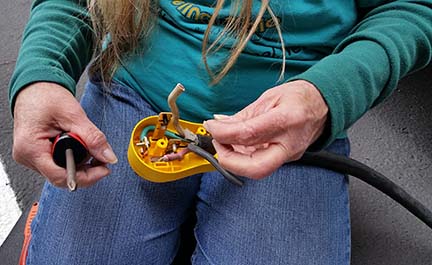 By then we were hungry, so we went to Sporthaven Marina for dinner. Somebody recommended this restaurant on the waterfront on our last visit to Brookings and we remembered that it was very good. It still is, and the portions are so big that neither of us could finish everything. 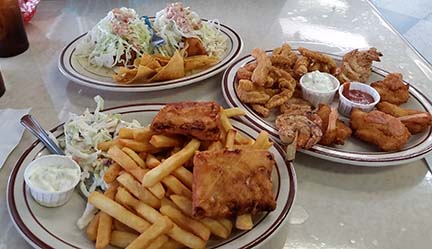 When we were finished eating we strolled along the marina, checking out some of the boats. Brookings is the busiest recreational port on the Oregon coast, as well as one of the most active Chinook salmon harbors on the coast. Every year more than 31,000 trips out to sea leave from here. More than 5,000 commercial fishing vessels visit the port annually and more than 20 million pounds of bait, fuel, ice, and fish products cross its docks annually. 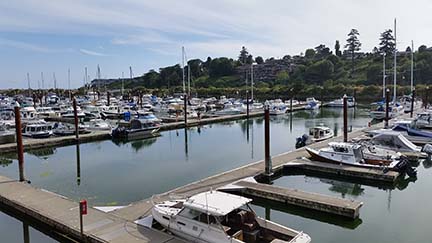 While it was tranquil yesterday, things were very different here back on the morning of March 11, 2011when a tsunami created by an earthquake off the coast of Japan the night before brought a surge of water pouring into the harbor, followed by several more surges over the next 24 hours. In their wake the surges left massive damage to the harbor’s infrastructure. Six boats were sunk and over $25 million in repairs were needed to recover from the catastrophe. Fortunately, there were no serious injuries.

Brookings is a neat town and we’ll hang out here a few days before we venture further up the coast. We may even find some more seafood to enjoy while we’re here!

It’s Thursday, so it’s time for a new Free Drawing and I know this week’s prize is going to be a hit, as it’s an autographed copy of Miss Terry’s Kitchen. To enter, all you have to do is click on this Free Drawing link or the tab at the top of this page and enter your name in the comments section at the bottom of that page (not this one). Only one entry per person per drawing please, and you must enter with your real name. To prevent spam or multiple entries, the names of cartoon or movie characters are not allowed. The winner will be drawn Sunday evening. 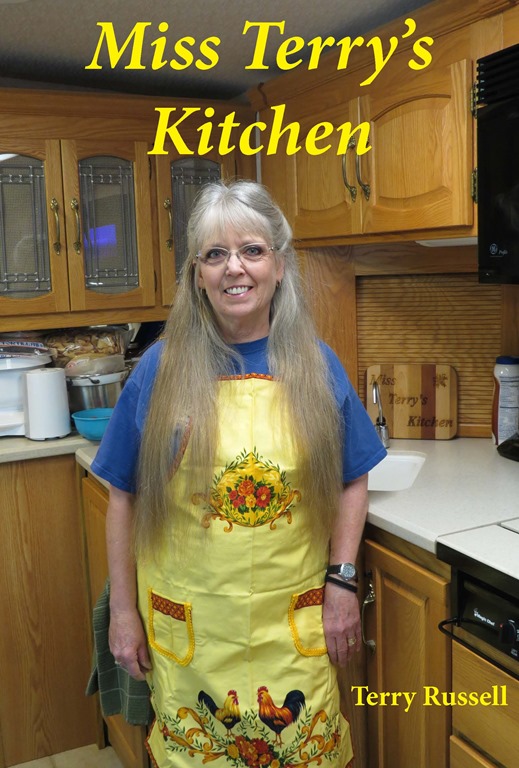 Thought For The Day – Adventure without risk is Disneyland. – Doug Coupland

5 Responses to “Eureka To Brookings”