Terry and I have always enjoyed helping new RVers learn about the RV lifestyle, and yesterday we got to help a very special newbie get settled into her new home on wheels.

Terry’s sister Dani bought a brand new Cedar Creek fifth wheel trailer and yesterday afternoon it was delivered to a lot she is leasing for the season at Hon-Dah RV Park. We got to the campground just after the deliveryman had backed it into her site, and the first thing we immediately noticed was that the way he had her positioned, tree branches were rubbing against the living room slide. We had him move it a couple of feet forward to clear the branches, and he got it leveled out and hooked up.

Once the deliveryman left we spent a couple of hours helping Dani unload her truck and carry everything inside, helped her figure out some things like where the water heater switch was hidden, and gave her a quickie lesson on dumping and things like that. 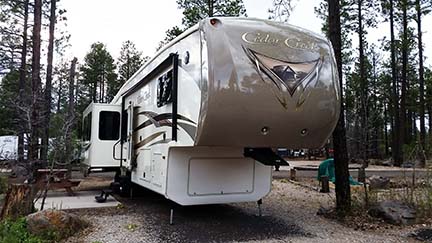 By then it was after 6 and we were all hungry, so we left the RV park and had dinner at Pinetop Brewing Company, a new brewpub that opened since we were here last year. There was a live band that was pretty good and we sat outside while we ate and enjoyed the music.

By the time we finished dinner and visited for a while it was getting late, and Dani still had a lot of stuff to put away, so we said our goodbyes and came home. But no sooner did we get in the door when Dani called to say that she could not get the trailer’s door to unlock. She said the key would turn but something seemed jammed. So we grabbed some tools and a couple of flashlights and drove the sixteen miles back to Hon-Dah.

I fiddled with the door for a while and got nowhere, so I got out of the way and let somebody who knew what they were doing take a look. It took Terry about three minutes to open it. It appeared that the lock, which seemed pretty flimsy to me, was jammed in some way, and it took Miss Terry’s magic to make it cooperate.

By the time we got back home the second time it was about 10 p.m., just in time to tune in to the news to see who we’re at war with this week while I worked on the blog. Today Terry’s parents will arrive at Hon-Dah to stay in their fifth wheel for the summer, so we’ll be driving back up to help them get unpacked and settled in.

Don’t forget to enter this week’s Free Drawing for an audiobook of Rift in the Races , the second book in my friend John Daulton’s Galactic Mage series. To enter, all you have to do is click on this Free Drawing link or the tab at the top of this page and enter your name in the comments section at the bottom of that page (not this one). Only one entry per person per drawing please, and you must enter with your real name. To prevent spam or multiple entries, the names of cartoon or movie characters are not allowed. The winner will be drawn Sunday evening. 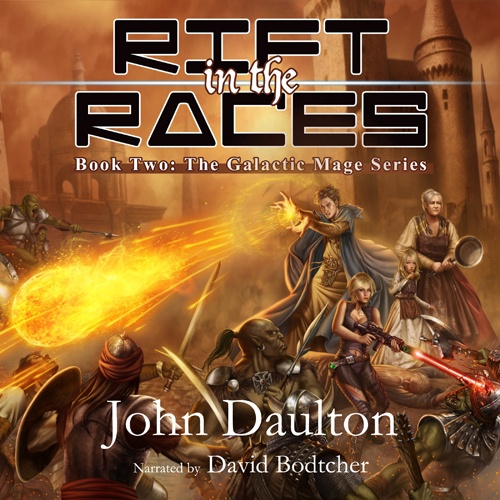 Thought For The Day – Never judge a book by its movie.

4 Responses to “Helping A Newbie”