Steven and Queenie Malcolm (aka The Traveling Light 2) are starting their 7th year of fulltiming, and still having more fun that any two perpetual kids should be allowed, even if their introduction to the mobile lifestyle was due to unforeseen setbacks.

As Steven explains it, “You may have heard that there was a blip in the economy in 2007. (It was in all the papers wasn’t it?) The company I was working for went bankrupt and my hair was the wrong color for finding gainful employment. We started working part time jobs that we found on Craigslist and by word of mouth. Then we started thinking it would be good to maybe buy a small Class C so that some of the jobs that we traveled to we could stay overnight (like grocery store resets, trade shows, and festivals). One day Queenie said “Instead of looking for a small camper, why don’t we get one big enough to live in and stop paying rent?” 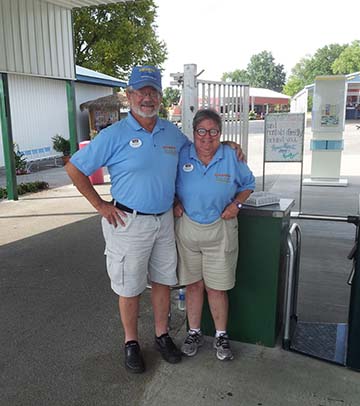 Steven says he likes to tell everyone that he purchased a motorhome within 24 hours of her saying that, but actually they first went to an RV Dreams Rally in Longs, South Carolina, where Howard and Linda Payne saved them from ourselves with great advice. They also met Jim and Chris Guld from Geeks on Tour there and were given a list of good contacts for reference, which included the Gypsy Journal. They also picked up a copy of a book that is now out of print called Movin’ on: Living and Traveling Full-Time in a Recreational Vehicle by Ron and Barb Hofmeister, which was worth its weight in gold. “Armed with the info from all of these great reference people, we felt confident about our future and never looked back,” Steven said.

Wanting to remain debt free, they started with a 25 year old Class C motorhome, which they replaced last year with a Safari Trek. They pull a 16’ enclosed trailer, which serves as Smart car garage and storage wagon.

Before all of that happened, the Malcolms, who were born and raised in the Midwest, lived in Telluride, Colorado for 21 years. Steven was a finish carpenter and construction manager, and had worked for the Sante Fe Railroad after getting out of the Army. He also worked in a gold mine and as an EMT/Mountain Rescue first responder. Queenie was a bookkeeper for a law firm and later a reservation agent for Choice Hotels.

Steven said that because they are accustomed eating every day, they still need to work as they travel. And their jobs have been varied, everything from working on a traveling grocery store reset team, traveling to trade shows and festivals for Mr. Rogers Windows and Bath Fitter, mystery shopping for McDonalds and several cell phone companies, doling display audits for Sam’s Club, UPS and Sprint, scanned medical records from written documents to digital documents, being a freight damage investigator for Averitt trucking, selling things at flea markets. and several other day jobs. “The first year of fulltiming, I think we had seventeen 1099’s and W2s”.

During their second year on the road they went to work for Speedway Motorsports, which owns several NASCAR racetracks, along with dirt tracks and at least one drag strip. They loved it and were with NASCAR for two seasons. In their fourth year as fulltimers they went to work in Guest Services for Cirque-du-Soleil and traveled with their Big Top show TOTEM. They said It was an awesome job. They have also worked for two amusement parks, in campgrounds, for Amazon during their peak season several times, and at a marina on Kentucky Lake, where Steven worked the gas pumps and told fishing stories while Queenie worked in the store and bait shop. “I really never thought I would see my wife loading crickets in a bait cage with her bare hands, and liking it!” Steven said.

When asked what they like best about fulltiming, they said if you don’t like the neighborhood you can turn the key and move on.

What do they most dislike about fulltiming? Moving to the next job can be stressful. Steven and Queenie were both quilters and really miss a sewing room so they are remodeling their RV’s cabinetry to incorporate sewing and revamping the front of the cargo trailer to become a small woodworking shop, another of Steven’s special interests.

The Malcolms have not spread their wings as much as some fulltimers, remaining in the Southeast quarter of the country and traveling less than 5,000 miles a year now that they are no longer working trade shows or festivals. They hope to change that soon and start to explore more of the country and crossing things off their bucket list. Steve added, “Nick, I read your blog the other day and we are not putting anything off. What you wrote I have taken to heart.”

Many RVers have special goals, and the Malcolms have a Streets and Maps document that has all of the places they hope to go and things to see. It covers 33,000 miles and would take about them about ten years. They hope to start on that adventure in January, 2016. Steven would also like to take the 12-week course to become a certified RV Technician.

Like many fulltimers we have interviewed, it would be hard for Steven and Queenie to choose just one best day on the road, but they include a night when they sat outside the Cirque-du-Soleil tent and watched fireworks. Another time was when a clutch of Black Ducks that had lost their mother adopted them as their new parents. Or driving the Blue Ridge Mountains in spring, or being invited to a garage get-together of only locals for a bluegrass jam session, and the list goes on.

They agreed that their worst day fulltiming was still better than their best day working.

The hardest part of leaving their old life was not having a sewing room or workshop, and putting some things in storage that they just couldn’t part with. (They said that those things will go away in January, 2016).

What was the best thing about leaving their old life? Something many fulltimers have told us: “When we liquidated most of our possessions it was very freeing.”

What advice would the Malcolms give to a newbie? “If at all possible, start debt free, and don’t put anything in storage. We started out debt free, which sounds real good except that it was more or less mandated by the fact that pretty much everything went away with the economic downturn in 2007. We were more fortunate than some, we were able to pay cash for an old camper that was in fairly decent shape. We stayed debt free and lived a frugal life, but still did just about anything we wanted to do. But last year we bit the bullet and purchased the Trek and Smart car after a particularly bad year with our then Class C and no car for the last 3 years. We were still frugal and kept our payments way below 30% of our average working income. We sat down and figured out that we could work hard for a few months and restore our nest egg and then be able to go where and when we wanted.

Summing up their thoughts on fulltime RVing, Steven said, “There is a fantastic freedom that comes with this lifestyle. I can’t imagine not doing it, but it is not for everyone. Before making the decision you have to do some real soul searching. I would add that if you are going to become workampers, you have to understand the concept of status quo. Every job you go to will be different and those jobs survived without you before you arrived. Take whatever is written and whatever is explained as what you will be expected to do with a grain of salt. Do not make any decisions until you have been on the job with the management and others employees for a few days. You will be told one thing in training or written instructions only to find that the actual conditions may be different, maybe vastly so. If that is something you can’t accept, workamping will probably not be an enjoyable or even possible endeavor for you. No matter who you were or what you did in the past, none of it counts anymore. In the past what you did, who you knew, where you lived and what you drove was who you were. From the day you become a fulltime RVer, what you are is all face value. What you see is what you get. Also, fulltiming has very little to do with camping. Recreational campers, even those that may go on regular extended trips, are not the same. They do not see what you see. They do not live like you live. Their values are probably different.”

Note: If you would like to be featured in our series of fulltimer profiles, please send an e-mail to editor@gypsyjournal.net

Congratulations, Randy McCoy, the winner of this week’s Gypsy Journal drawing for an audiobook of Rift in the Races by John Daulton. We had 53 entries in the drawing. Stay tuned, a new contest starts soon.

Thought For The Day – You know you are old when you say goodbye to tension and hello to pension.