No, I’m not talking about those folks in Washington who are busy taking bribes and shafting all of us, though you shouldn’t trust them either. But I’ll get to all of that in a moment.

After we’ve been sitting still for a while, we never seem to sleep well the night before we begin a trip, and Wednesday night was no exception. We both tossed and turned all night long and were up by 7 a.m. to get ready to hit the road. This time of year high winds are a fact of life in northern Arizona, but we got lucky and had a pretty calm day for traveling. Nice!

We left the Show Low Elks lodge campground and traveled 50 miles north on State Route 77 to Holbrook, where we got on Interstate 40 and traveled west across the state to Kingman, with a stop at the Flying J in Winslow to take on fuel.

There were two RV islands, but one was blocked off because they were working on the pumps, so I pulled in behind the motorhome at the other pump. The owner had a beautiful German shepherd on a leash, which is my favorite breed of dog. So I had to get out and play with her while he filled his tank. That was cool. What wasn’t cool was that after he was done and put the dog back inside, he then proceeded to wash his windshield and putter around for another fifteen minutes or so before he pulled away from the fuel island.

Back on the road, we noticed a vibration whenever our Winnebago’s transmission upshifted or downshifted, or as I was going up a steep hill, and then once it had changed gears it would smooth right back out. Hmmm…. what’s that about?

All of my gauges were reading fine and there were no warning lights, just that noticeable vibration. I was worried that something like the clutch or torque converter was going bad. A few miles west of Williams there is a big safety pullout before the road starts a two mile long 6% downgrade, and I stopped there to check things out. Which means I called Greg White.

Greg asked if the transmission was low on fluid. Not according to the dipstick, but he said the dipstick doesn’t always give a reliable reading and suggested I use the transmission’s keypad to have it check the fluid level. That is done by putting the transmission in Neutral, with the brake on, at operating temperature and then pushing both the Up and Down arrows on the keypad at the same time. I did and the digital readout said LL 03, which means the transmission was three quarts low. I went outside to the back of the motorhome and checked the dipstick, carefully wiping it clean before I put it back in and pulled it out again and it showed the fluid was in the correct normal when hot range. But back inside the keypad once again showed three quarts low.

We couldn’t sit there all day, so we went on to Kingman and stopped at a NAPA Auto Parts. I run synthetic fluid in the transmission, and a gallon of Amsoil synthetic fluid set me back $51. Terry held the funnel while I poured three quarts in, and probably half a pint down her arm, but she never complained.

Back on the highway we immediately noticed the vibration was lessening and the rig began purring right along. The transmission holds something like twenty quarts of fluid, and we were both amazed that three quarts could make that much difference. Now the question is, where did the fluid go? We have not noticed any leakage or spray on the Explorer that would indicate a leak.

From Kingman we took U.S. Highway 93 north about 60 miles or so. It’s a good divided four lane road through the high desert, and as we approached the Colorado River we started seeing some dramatic mountain scenery. 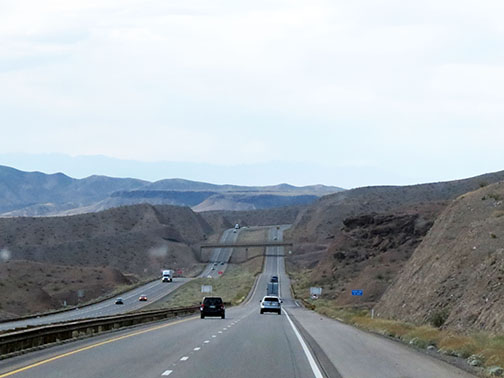 Everybody knows that I have a fear of bridges, but the bridge that crosses the river near Hoover Dam is a piece of cake. High profile vehicles are supposed to stay in the left lane, and the sides are high enough that I can’t even tell I’m on a bridge. 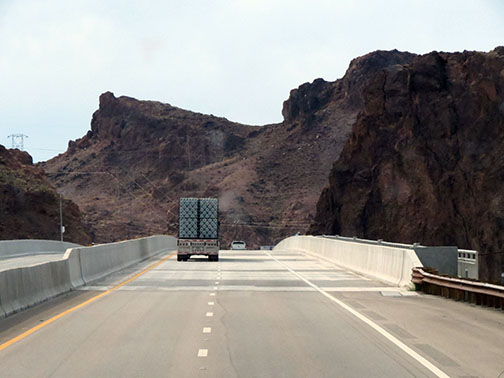 Terry did manage to get one picture of the water as we passed over, and then this one of Lake Meade once we had crossed into Nevada. The white line on the rocks shows how low the water level is. 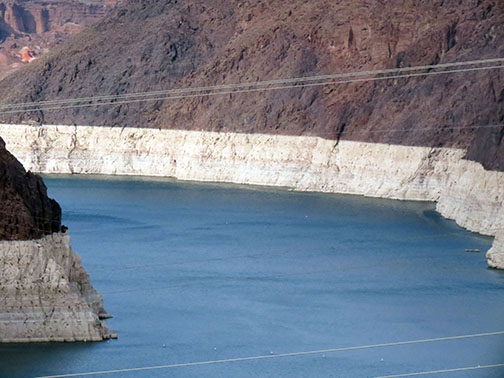 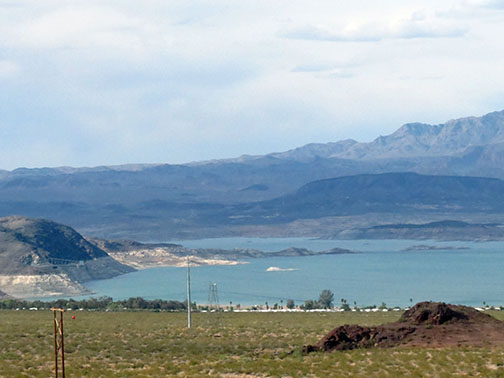 We arrived at the Las Vegas Thousand Trails preserve about 5:30 and got settled into a full hookup 50 amp site with 390 miles behind us. That’s a long day and a lot of miles, but now we’ll sit still for two or three weeks while I get the new issue of the Gypsy Journal done.

We were both disappointed to find that the Verizon internet sucks here, both on our 3G air card and using my Samsung phone as a 4G hotspot. You’d think a city as big as Las Vegas would have decent service from Verizon, but apparently you’d be wrong.

Be sure to enter this week’s Free Drawing for an audiobook of Gun Shy, the fifth book in my friend Ben Rehder’s excellent Blanco County mystery series. To enter, all you have to do is click on this Free Drawing link or the tab at the top of this page and enter your name in the comments section at the bottom of that page (not this one). Only one entry per person per drawing please, and you must enter with your real name. To prevent spam or multiple entries, the names of cartoon or movie characters are not allowed. The winner will be drawn Sunday evening.

Thought For The Day – Dear life, when I asked if my day could get any worse, it was a rhetorical question, not a challenge.

7 Responses to “Don’t Trust a Dipstick!”