Abilene: President Dwight D. Eisenhower grew up in Abilene, and he and wife Mamie are buried next to his boyhood home, which is accompanied by the Eisenhower Museum and Presidential Library.

Arkansas City: At the Cherokee Strip Living Museum you can learn about the wild pioneer days in this region.

Atchison: Pioneering aviator Amelia Earhart was born in Atchison in 1897 and lived here until she was twelve. Her girlhood home and museum, located at 223 N Terrace Street, is open for tours. 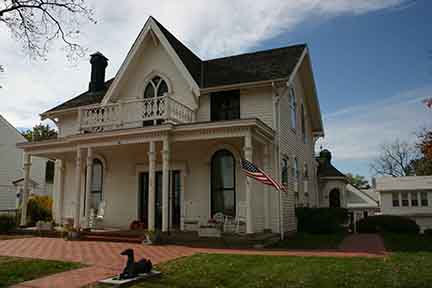 Chapman: The Kansas Auto Racing Museum displays race cars and racing memorabilia. Visitors can sit in some of the cars and use NASCAR video games for a hands-on experience.

Colby: The Prairie Museum of Art and History features an international collection of rare dolls, porcelain, glass, antiques, and artifacts in the main museum building. The complex includes a furnished sod house, a 1930s farmstead, a one room school, and a country church.

El Dorado: You can see displays on the state’s oil drilling industry at the Kansas Oil Museum here.

Ellis: The Walter P. Chrysler Boyhood Home and Museum preserves the modest house where the future automobile maker lived and has displays about his early life.

Fort Scott: Fort Scott National Historic Site preserves historic resources related to the opening of the West, from the Indian Frontier to the Mexican War, Bleeding Kansas, the Civil War, and the expansion of railroads into the West.

Goodland: The High Plains Museum’s interesting displays include exhibits about pioneer life on the prairie, dinosaur and mastodon bones, Indian artifacts, and a replica of the first patented helicopter.

Goodland: Art lovers will love the World’s Largest Painting on an Easel, a 32-foot high copy of Vincent van Gogh’s painting Sunflower, mounted on a giant easel in Goodland.

Hanover: The only original Pony Express station still in existence, the Hollenberg Pony Express Station has been restored to its 1860 condition.

Hays: Fort Hays State Historic Park contains the original blockhouse and other buildings from the Old West fort that stood here in the 1800s.

Hays: If you’ve got that caveman feeling, you’ll be right at home at the Sternberg Museum of Natural History, where life 88 million years ago is re-created, complete with prehistoric animals that lived long before our species ever learned to walk upright.

Hiawatha: An unusual monument to enduring love stands in the Mount Hope Cemetery here. Eleven life sized statues show John and Sarah Davis at various stages in their lives, from newlyweds to middle aged, to the final statue, of John Davis sitting alone in a chair, Sarah’s empty chair beside him. 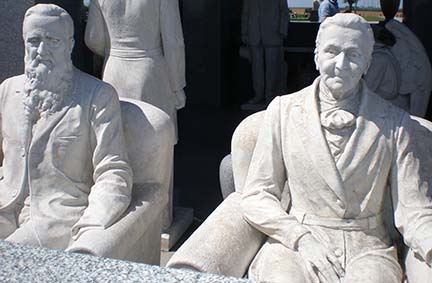 Hutchinson: At the Kansas Cosmosphere and Space Center you can see historic aircraft, including an SR-71 Blackbird spy plane, and a full sized replica of the space shuttle, along with the largest collection of space exploration equipment and artifacts outside of the Smithsonian’s Air and Space Museum.

Hutchinson: Hutchinson was built on top of one of the largest salt deposits in the world. With more than 67 miles of mined caverns, the Hutchinson salt mine produces 300,000 tons of rock salt each year. The  Kansas Underground Salt Museum includes a trip 650 feet underground to see how salt is mined and to teach visitors about the important role salt plays in our lives.

Larned: The Santa Fe Trail Center is a museum to the pioneers who settled the Kansas prairie, complete with a sod house and artifacts. 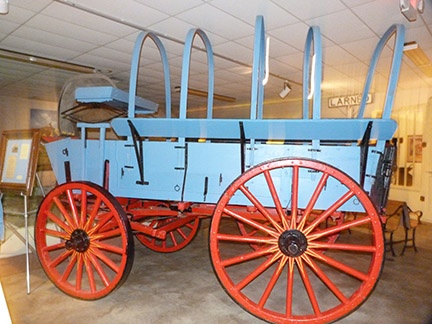 Larned: The Fort Larned National Historic Site is the reconstructed fort that was the U.S. Army’s headquarters for military actions against the Plains Indians in this region following the Civil War. 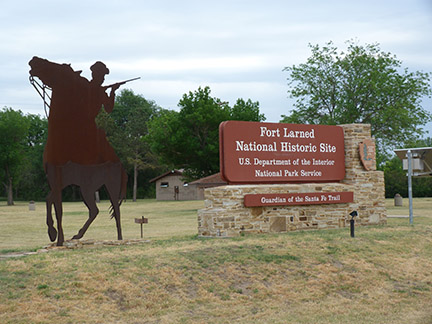 Lawrence: At Dyche Hall in the University of Kansas Museum of Natural History you will find the preserved body of Comanche, a cavalry horse who was the only survivor of Custer’s Last Stand at the Little Bighorn, on display in a specially built case. The horse was wounded twelve times during his military career.

Liberal: The classic tale The Wizard of Oz never really tells us exactly where in Kansas the story’s teenage heroine Dorothy was from. Who cares? The nice folks in Liberal have adopted Dorothy, Toto, and her Munchin pals and given them a home at the 5,000 square foot Dorothy’s House Museum, which isn’t about to blow away in the next big storm that comes along! Liberal has adopted the Land of Oz theme with gusto, even holding an annual OzFest every October, with a parade, scarecrow making contests, games, food, and fun.

Liberal: If you love vintage airplanes, stop at the Mid-America Air Museum, where they have an impressive collection of military and civilian aircraft.

Meade: The notorious Dalton Gang Hideout here was the gang’s refuge when not robbing banks, and the simple frame house that was their hideout is now open for tours. 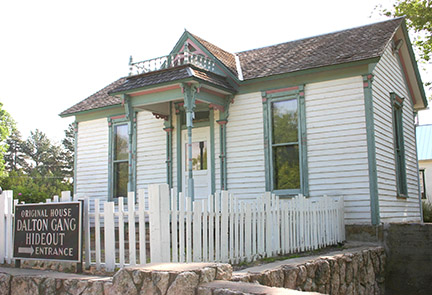 Olathe: The Mahaffie Stagecoach Stop and Farm Historic Site is the last remaining stagecoach stop on the historic Santa Fe Trail still open to the public. Three original buildings are preserved: the Mahaffie Family Home/Stagecoach Stop, a two-story ice house, and a wood peg barn. Other buildings include a large livestock barn, a 20th century implement barn made from two wooden railroad boxcars, a reproduction blacksmith shop, and a smokehouse.

Republic: The Pawnee Indian Village Museum offers a look at Native American life 150 yeas ago. As many as 2,000 Pawnees lived in this village of more than 40 lodges. The museum enclosed the excavated floor of one of the largest lodges, with the remains of other houses dotting the grounds.

Russell Springs: The Butterfield Trail Historical Museum is housed in the former Logan County Courthouse and has displays on the historic trail and local history.

Sedan: This is the hometown of the world’s most famous clown, and you can learn about his life and career at the Emmett Kelly Museum.

Topeka: The Kansas Museum of History features an 1880 Atchison, Topeka & Santa Fe railroad locomotive, Cheyenne tipi, Wichita grass lodge, covered wagon, and log house in displays that range from prehistoric times through the Civil War to the present day to present the history of Kansas.

Towanda: At the Paradise Doll Hospital & Museum you can view a collection of over 3,000 dolls and watch dolls being repaired.

Wamego: Housed in a remodeled 1880s mercantile building on the main street of town, the Oz Museum boasts one of the largest private collections of Oz memorabilia in the world. The collection consists of over 2,000 items from the 1939 MGM movie The Wizard of Oz, starring Judy Garland. Displays contain limited edition Oz dolls, the dress Diana Ross wore in The Wiz, a number of products inspired by Oz and its characters, and Wizard of Oz books from around the world.

West Mineral: Here you will find Big Brutus, a sixteen story tall mining shovel capable of scooping out 150 tons of earth in one swipe.

Thought For The Day – If at first you don’t succeed, keep trying until you really screw it up.