I hit a milestone yesterday, 500 reviews of the original Big Lake book on Amazon, and it’s still going strong with a four star rating. Thank you to everybody who has read the book, posted reviews, and told their friends about it. You all have helped make my dreams come true.

I’ve spent the last few days working on the new issue of the Gypsy Journal, hoping to get it to our printer early next week. If I get it to them in time, they say they can print it and ship it back to us before we leave here on the 19th to go up to Show Low to see my daughter and her girls. That will save us a 175 mile trip each way back to Phoenix to pick it up once we’re up there and settled in. By the time I knocked off about 10:30 last night I had 21 pages finished.

We did take a break to go to meet Greg and Jan for our final dinner together at Los Gringos Locos. They are leaving here Sunday, but today we have a family dinner with Terry’s parents and sisters. The food was excellent, as always, and we had a good time visiting with our friends. Hopefully we can pop in for a quick visit with them this evening on our way home from Terry’s parents’ house.

On Thursday Terry ran some errands, stopping at the post office to send out some orders and then at WalMart. She used her Chase Visa card both places, and yesterday morning she received a message from Chase saying that attempts had been made to use her credit card at a movie theater near the WalMart and at a theater in the United Kingdom. Chase told her both charges had been declined and that they had cancelled the card and were sending her another one.

The same thing happened to her in late December when we were in Florida. In that case, as with this one, the only places she had used the card were national chain stores. No internet purchases, no gas stations or strange ATMs, the kind of places you usually hear about credit cards getting hacked. What a hassle!

Have you entered our latest Free Drawing yet? This week’s prize is an audiobook of Big Lake Lynching, the second book in my Big Lake mystery series. To enter, all you have to do is click on this Free Drawing link or the tab at the top of this page and enter your name in the comments section at the bottom of that page (not this one). Only one entry per person per drawing please, and you must enter with your real name. To prevent spam or multiple entries, the names of cartoon or movie characters are not allowed. The winner will be drawn Sunday evening. 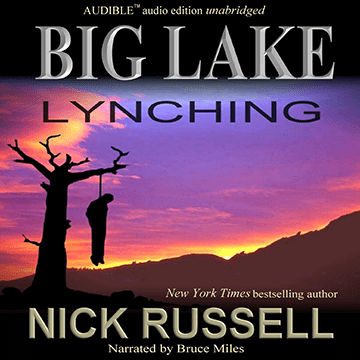 Good news for fans of my friend Bobbi Holmes’ Haunting Danielle mystery series! Bobbi just released the third book in the series, The Ghost Who Wasn’t. It’s available on Amazon, Barnes & Noble, and other online e-book stores. In honor of the new release, Bobbi has dropped the price of the first book in the series, The Ghost of Marlow House, to just 99¢. Set in a bed and breakfast on the Oregon coast, these are fun, easy reads that you’re sure to enjoy. Check them out.

Thought For The Day – Stay away from negative people. They have a problem for every solution.

6 Responses to “A Milestone”