It’s a big transition to move from living in a large, beautifully restored Queen Ann Victorian home to a 40 foot diesel pusher, but Marcy and Steve Krauss have handled it very well. And after fourteen years of fulltiming across North America and RVing as far away as Africa, Australia, and New Zealand, they are still loving every minute of it. 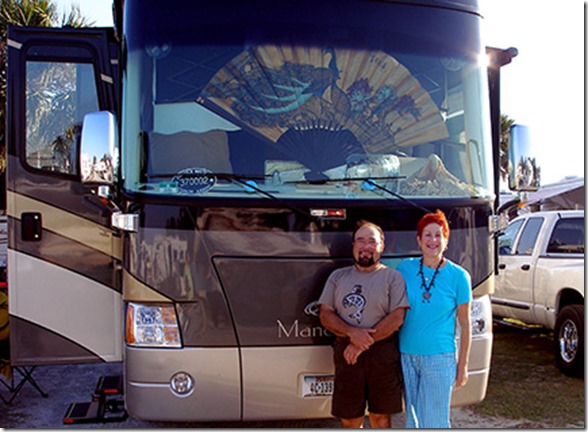 From Fort Lee, New Jersey, Marcy and Steve began RVing with a small second hand 21 foot Layton trailer, and progressed to a 35 foot Wilderness travel trailer and then a 36 foot Carriage 5th wheel before acquiring their present rig, a 40 foot Mandalay motorhome.

Marcy worked for the New York City Board of Education for 35 years as an elementary school music teacher, a United Federation of Teachers Chapter Leader, and union litigator. Steve was an aircraft mechanic, owned his own home remodeling business, and had a wood shop for about 15 years.

They became fulltimers because they hated going home to their house after a camping trip, and the longer they stayed away the happier they were. When they were working they escaped from our daily routines whenever they could to head out to either the Poconos or the Jersey Shore to camp in all seasons. When retirement came on January 2nd, 2001, they wasted no time, putting Fort Lee in the rearview mirror a mere six days later, vowing never to willingly be in snow again. The first year after they retired they made it home for about one month, always finding an excuse not to go back. The next year they returned to New Jersey to pack up, get the house in prime order for sale. They said that when the house sold, they bought their 5th wheel and have never lived in a stick house since.

When asked what they like best about fulltiming, Marcy and Steve said, “No matter where we are, we’re always home. All of our stuff comes along with us. The outside scenery changes but the thrill and adventure of turning on that engine remains. There’s always the adventure of taking that next road.”

What do they most dislike about fulltiming? Having limited space. They have developed a fairly strict plan that throws out the unused to make room for the new.

Marcy and Steve went on their first RV tour to Mexico and the Baja in 2006, on one of the last piggy back trains to travel through the Copper Canyon. In 2008, they became investors in Fantasy RV Tours and since then have traveled the continent as Sales Ambassadors and Field Staff for the company.

While they used to move around a lot, for the last few winters they have been delivering travelogues at the Thousand Trails Orlando Resort and working at the Florida RV shows. During the summer they travel. Two years ago they scouted a route called Rivers West that follows the trail of Lewis and Clark and last year they were tailgunners on a Fantasy Tours caravan along the route. The trip has been such a huge success with their guests that they are going to run full again this year.

They said some of their most remarkable trips were visiting Churchill, Canada during the polar bear migration and an RV safari to South Africa. Other favorite places are almost too many to list – immersing themselves in the culture of the Tarahumara Indians in Mexico, meeting a lioness in Botswana, glimpsing the casket that was resting in a niche high up in the cliff during a Yangzee River cruise through the 3 Gorges in China.

Steve and Marcy are members of the FMCA, Escapees, Thor Diesel Club, and the Good Sam Club. Besides traveling and giving seminars at RV rallies, Marcy enjoys reading, while Steve keeps busy maintaining their coach in pristine condition. He is also a talented artist and enjoys carving wooden walking sticks.

Of course, not every day fulltiming is perfect, like when they discovered that they had oil in their coolant and were stranded in Lewiston, Idaho for more than a week while the warped engine block head was replaced.

But then there are those wonderful days like the one when they traveled 70 miles back to the Acoma Indian Pueblo to rescue a small dog that they had spotted a week earlier when they were there with a Balloon Fiesta group. She was starved and terrified but came right to them when they returned. Today she’s doubled her weight and is a healthy 9 month old happy puppy named Skye. 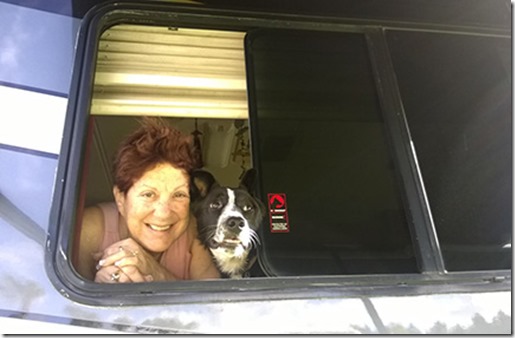 When asked what advice they would give to a newbie, Steve and Marcy said to do what pleases you, don’t try to see it all at once, and always follow your own desires.

They shared these final thoughts on fulltime RVing: You are part of a community that remains in touch by telephone and e-mail. Even though you may not be within a hand touch, you always remain connected. Then when you meet face to face again, it’s really sweet.

Some fulltimers have goals; it may be visiting all major league baseball parks or the homes of our presidents. Steve and Macy’s goals are a bit simpler, they just want to keep traveling, to keep looking down at the grass, and to be seen and not viewed! That sounds like a pretty good way to live your life to me.

Have you entered our latest Free Drawing yet? This week’s prize is an audiobook of Chesapeake 1880 by my friend Ken Rossignol, a tale of life in the Chesapeake Bay region as the industrial revolution changed the world forever. To enter, all you have to do is click on this Free Drawing link or the tab at the top of this page and enter your name in the comments section at the bottom of that page (not this one). Only one entry per person per drawing please, and you must enter with your real name. To prevent spam or multiple entries, the names of cartoon or movie characters are not allowed. The winner will be drawn Sunday evening. 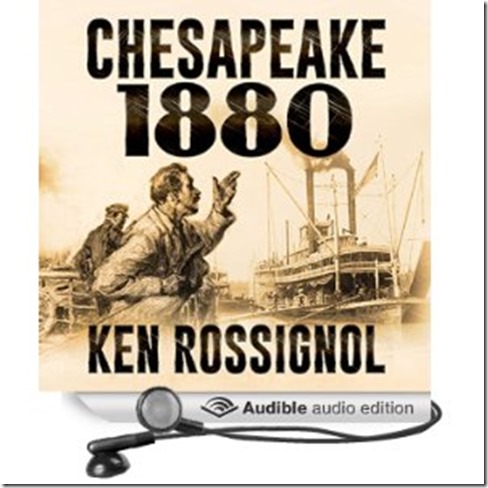 Thought For The Day – Instead of wasting time trying to lose weight, just buy clothes two sizes larger and you’ll impress everybody you know with a lot less effort.