We left the Escapees Dream Catcher RV Park in Deming, New Mexico and experienced that most rare of natural phenomena, a tailwind. Yeah, I know, I thought they were a myth myself, one of those made up things like leprechauns and wood nymphs, and I was so surprised that I almost fell off my unicorn. But there it was, a steady 20 mile per hour tail wind that pushed us west along Interstate 10. And according to my Silverleaf engine monitor, we were getting great fuel mileage!

Just about the time we left Lordsburg the highway took a different angle and the wind was hitting us from the side for a while, which made driving a bit of a white knuckle experience. But twenty or so miles later when we crossed into Arizona our route turned slightly again and the wind was back behind us.

We stopped at the Love’s in Benson for fuel, noting that diesel was about 15¢ a gallon cheaper than in New Mexico. By 3:30 we were in Tucson, our home for the next month or so as we get our annual medical stuff out of the way this week and next, and then we’ll be at the Escapees Escapade Rally March 8-13. We’ll have a vendor booth at the rally and I’ll be presenting five seminars. I hope we see a lot of you there.

With all of the frustrations we’ve had over the last few days, I forgot to tell you about a couple of odd coincidences I experienced. A couple of days ago somebody posted this old picture of a car towing a camper trailer in an internet RV group I help admin. 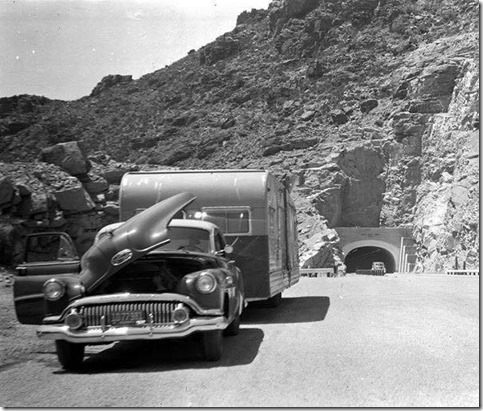 The car looks like a 1951 Buick, which is the same year and make as the car on the cover of my mystery novel Dog’s Run. The tunnel in the background is the Superior Tunnel on US Highway 60 near Superior, Arizona. Which is ironic, because the car on the book cover belongs to the Apache Junction, AZ police department, located maybe 30 miles from there. And when I took the picture of the police car it was in an RV park with trailers in the background, so my cover artist, Elizabeth Mackey, dropped out the background and put in the one you see on the book’s cover. 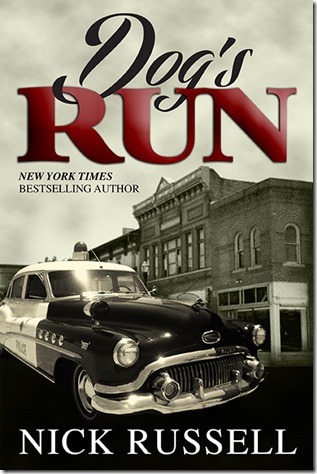 The other coincidence happened on Friday. We stopped at the Border Patrol Museum in El Paso, and while there I bought several books in the gift shop. That evening, when I started to read one of them called Whatever It Took by a former Border Patrolman named Kenneth LaMascus, I discovered that the introduction was written by Billy Kring, Chief Patrol Agent (Ret.), U.S. Border Patrol. The same Billy Kring who is the author of the Hunter Kincaid mystery series I wrote about in a blog last week, whom we visited with when we were at the Lone Star Corral RV Park in Hondo, Texas. Yes, it is a small world.

Thought For The Day – I wonder if clouds ever look down on us and say, “Hey, that one’s shaped like an idiot.”