Nick's Blog » On The Road Again

Our last day at the Tampa RV Show was as busy as all of them. We walked for miles, saw lots of interesting RVs, and met lots of nice people. But we were sure ready for it to be over. That place wore me out!

On Saturday John and Kathy from Living the RV Dream hosted another meet and greet and we tagged along. There were so many folks stopping by that I can’t possibly remember everybody, but they included Ken and Martha Weisman, who do the RV Navigators podcast, Randy and Vanessa Radcliffe, Arlene and Michael Tischler, Kevin and Jennifer Joyce, Susan Young, Amy and Terry Smith, Roy and Leslie Curry, and Steven and Dawn Pelletier. It sure was nice to put faces with so many names from John’s Living the RV Dream Facebook group and our mailing list. We also bumped into Steve Segler, and Ivan and Marlenna Davidson as we were wandering around the show. If I missed anybody or got your name wrong, my apologies. It was kind of information overload.

Walking anywhere on the show grounds or in the vendor buildings was always a challenge because it was so crowded. You moved when the crowd moved, you stopped when it stopped, and you tried not to step on the 1,001 little dogs on leashes trying desperately not to get crushed. I’m not sure why anybody feels the need to drag a dog to an event like that, or push them in a buggy as a lot of people were doing. But I won’t get on my soapbox. No, I won’t. Really, I’m done.

There was a tram service and it was only twice as slow as walking as folks got on and off and the poor drivers tried not to run over anybody in the crowds. You couldn’t have paid me any amount of money to do that job. 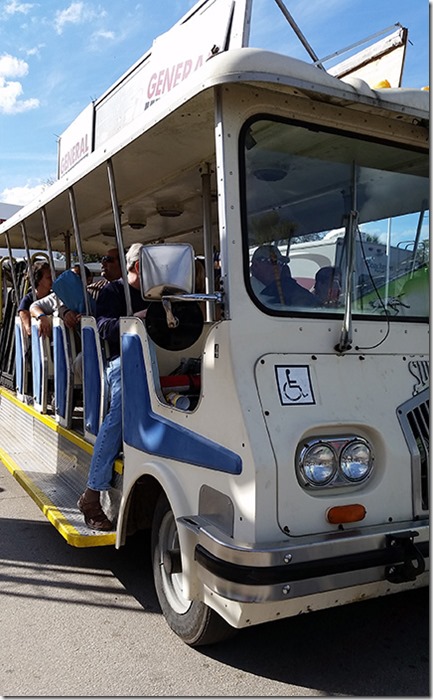 By the end of the day we were sure glad to get back to the relative peace and quiet of our parking area. 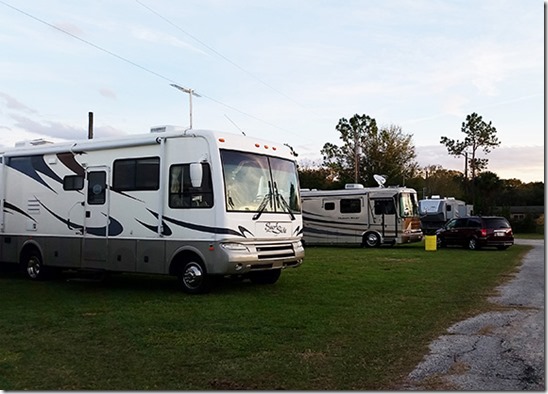 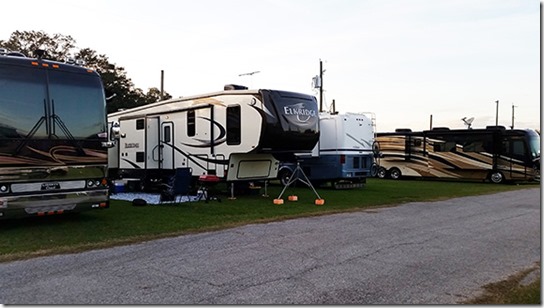 We did see all kinds of really neat RVs, including some that cost just a little bit more than the operating budget of some small nations, with every kind of gizmo and geegaw you could ever think of, and a few you never would. But I have to be honest, Miss Terry and I agreed that there wasn’t anything at the RV show we liked as much as we do our 2002 Winnebago Ultimate Advantage.

Besides all the shiny new stuff, there were a few antiques too. Look at this old beast. A million miles on the odometer, belches fumes and leaks like a sieve, hard to get started in the morning, ugly as sin and still going strong. And the 1978 Newell coach he’s standing in front of is pretty cool, too. That’s my buddy Al Hesselbart, the retired historian of the RV Museum in Elkhart, Indiana. We’ll miss Al since it was time to say goodbye until next time, but it was time to hit the road again. 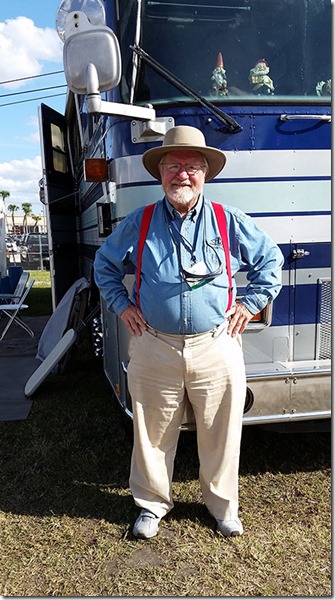 We left the Florida State Fairgrounds about 10 a.m. yesterday and had a long but easy day of driving, pulling into Cherry Blossom RV Park, a nice little Passport America park in Dothan, Alabama at 3:30 local time, gaining an hour as we drove west. We covered 375 miles, which is a bit more than we like to travel these days, but it was worth it because tomorrow we’ll be in Tuscaloosa for a visit with my son Travis and his pretty wife Geli. Yes, we’re going to enjoy some family time!

Thought For The Day – Everybody is entitled to be stupid now and then, but some abuse the privilege.

4 Responses to “On The Road Again”