It’s done! I got up early and cranked out over 4,500 words yesterday and finished Big Lake Burning, the sixth book in the series. Now I’ll give it a read through and then print it out for Terry to proof and edit. It always feels good to get a new book done, and once I do I’m like an expectant father; I can’t wait for it to come out and see how it looks.

Yesterday was another gray, cold day here in central Florida. Not the kind of weather to be outside doing anything at all. So instead, we stayed home again so I could finish the book.

Terry had a frustrating day because some of the threads on her loom got tangled up and created a massive snarl that then got wound up in the project she has been working on. It took her most of the day to get it all straightened out. But she just said it was one more lesson learned and she now knows how to keep that from happening the next time around. That’s the difference between the two of us. If it would have been me, I’d have been cussing like a sailor. When my fishing line does that I throw the whole rod and reel in the lake and go buy a new one.

I did take time out of my day to tick off a woman who wrote wanting me to tell the whole world about an RV park that should be shut down because she and her five year old son were outside playing catch when the ball rolled into their neighbor’s RV site. The neighbors apparently have some kind of big old mutt and the dog grabbed the ball and took it to the boy. (I don’t know if it was on a leash or what the distances were.) The mom said she grabbed the ball out her son’s hands and threw it away and then rushed him inside where she scrubbed him down from head to foot so he didn’t catch something. She said she called the campground manager to insist the neighbors be evicted and he laughed at her and said to chill out.

After reading her long e-mail I wrote back and told her she really needed to get a life, and to allow her kid to have one too. The dog didn’t attack her son, he just wanted to play too, and when the ball rolled into his territory, he felt like he had been invited to the game. There’s no need to freak out over a few puppy germs. Many dogs I’ve known have been cleaner than some of the kids I’ve seen. I suggested that her son really should be allowed to enjoy the world, not spend his life looking at it from inside a bubble.

We’re up to over 150 entries in this week’s Free Drawing for a copy of John and Kathy Huggins’ So, You Want to be a Full-Time RVer?

To enter, all you have to do is click on this Free Drawing link or the tab at the top of this page and enter your name in the comments section at the bottom of that page (not this one). Only one entry per person per drawing please, and you must enter with your real name. To prevent spam or multiple entries, the names of cartoon or movie characters are not allowed. The winner will be drawn Sunday evening. 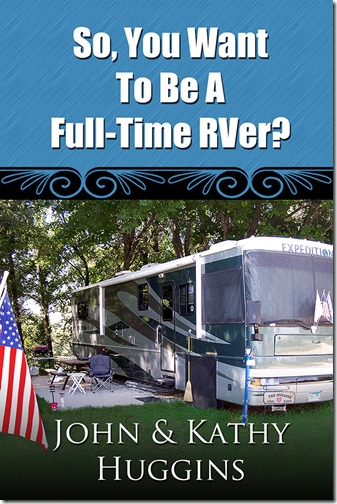 Thought For The Day – A wife has the last word in any argument. Anything a man says after that is the start of a new argument.