Nick's Blog » When Is Being Nice Rude?

Did I ever tell you that I’m married to the most beautiful, talented, and wonderful woman in the world? Yes, I’m a very lucky man.

But I’m not the only lucky person around. Look at this beautiful shawl that Miss Terry just finished. This wasn’t as complicated as some of the patterns Terry has created, but she still put over 20 hours into it. A lot of people have asked if she will be selling any of her work, but at this point she’s just making gifts for friends and family. I know several ladies that are going to be getting some beautiful presents. Besides all that beauty and talent, she’s a nice lady, too. 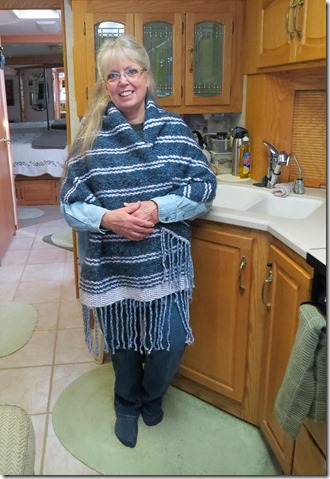 Speaking of nice, can being nice to somebody be rude? I think so, sometimes. Especially when being nice to one person inconveniences a lot of other people.

Here’s a case in point. Yesterday we went to a post office near the Orlando Thousand Trails preserve to mail out a package. We weren’t at all surprised that we had to look for a parking space, and that there was a long line of people once we got inside; after all, it is the holiday season. We weren’t even surprised that there were only two window clerks working the counter. After all, it is the post office.

We stood in line patiently and eventually moved up to where we were within sight of the counter. And then everything came to a screeching halt. A woman at the counter had a big box and got into a prolonged conversation with the clerk. We were too far back in the line to hear all that was being said, but we and everybody around us could plainly see the clerk leave her station and come back with a priority mail box and show it to the customer. And then she went in the back and came out with another box, and then a third one, all of which she assembled and showed to the customer. I might note that all of these boxes were available in the lobby where the rest of us stood waiting in line.

Okay, so we lost some time while all this went on. It was irritating, but life goes on. But then the clerk proceeded to open the woman’s box, go through all of the presents in them with her, and then carefully repack everything into several of the priority mail boxes and address the labels for her. And a couple of times the customer seemed to change her mind, because labels that has just been affixed were peeled off and new labels were filled out and pasted back on, all by the clerk. Meanwhile the line got longer and longer, until it stretched out of the lobby and past all of the post office boxes to the back of the room. Everybody waiting not so patiently while this went on and on.

And it wasn’t like the customer had some handicap that prevented her from repacking her boxes herself. She looked to be a healthy woman in her late 30s or early 40s, she spent some time chatting on her cell phone and walked out to her car under her own power when everything was finally done, which included another discussion about the cost of the postage and the clerk going over her receipt with her in detail.

By the time we finally got to the counter we had waited in line over an hour, and the people who came in after us were still waiting when we left. I’ve been in post offices all over this country and in every one I’ve ever been to, if your package wasn’t ready to go when you got to the counter, they told you to step put of line and come back when it was.

So what do you think? Was it rude to keep maybe 50 people waiting while she repacked a customers boxes, or was it just a nice gesture and I’m a Grinch? Either way, bah humbug!

Thought For The Day – You inspire my inner serial killer.

19 Responses to “When Is Being Nice Rude?”