Nick's Blog » Not Fun At All

We were hoping that our Norcold refrigerator would struggle along for just a couple more days, but when we woke up yesterday morning the thermometer inside the refrigerator said it was 62 degrees, and Terry could smell ammonia. So much for that idea.

So we spent the day emptying out the Norcold and hauling food to the trash. We hated seeing all of that money go in to the dumpster but it was too far gone to trust it. We are living out of an ice chest until the new refrigerator gets here on Friday.

Somebody from Facebook asked me why we would throw food away when, if we knew the refrigerator was failing, Terry could have cooked it all and we could have found homeless people to feed instead of feeding a dumpster. Yeah, because we didn’t have anything else to do, right? I guess it’s like the old saying goes, when you’re up to your ass in alligators, it’s hard to remember that your original intention was to drain the swamp.

If anybody is going to be at the Orlando Thousand Trails, or at the Escapees park in Bushnell or nearby and needs any of the glass shelves or plastic bins for a Norcold, let me know and you’re welcome to them. We’re not going to mess around trying to pack and ship them, but if we can meet we’ll be happy to do so.

I also called Winnebago’s customer service, gave them our coach’s serial number, and asked for any tips on removing the Norcold. The tech explained the procedure and I also talked to a couple of people who recently made the switch and got their input. I think we can handle it.

Some people have asked if we’ll post any pictures of the swap because they know their Norcolds are going to fail sooner or later. Yes, we’ll cover it all as we go, and then I’ll save it as a page here on the blog.

Because you probably need a break from hearing about the great refrigerator conundrum, here are a couple pictures I took a few days ago at Bradenton Beach. The pictures don’t really show how white the sand is. 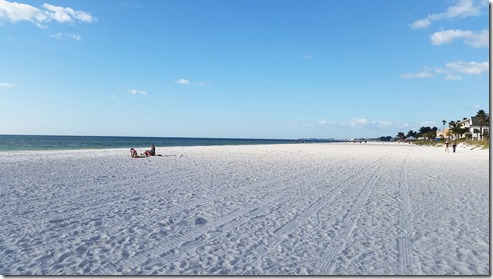 There were a lot of shells at the water’s edge and Miss Terry found some nice ones. Several had color combinations that she wants to incorporate into her weaving projects. 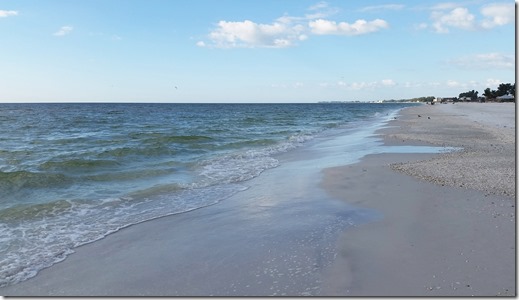 This guy was on a paddleboard making his way south. I wonder if he got where he was going? 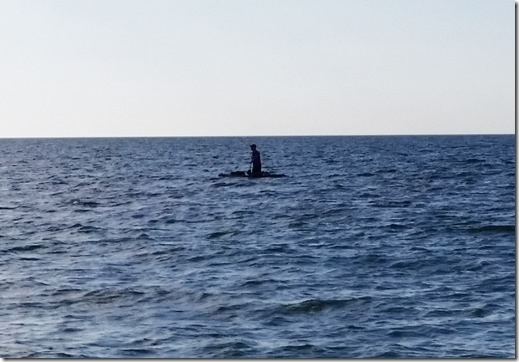 And this was the prettiest sight on the beach. 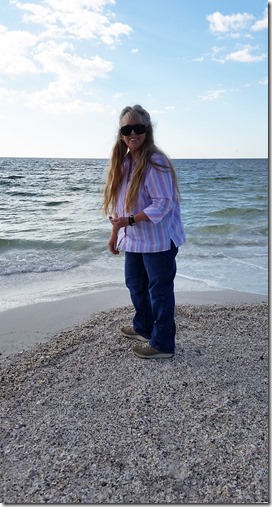 Today Terry may finish up a project on her loom to get it folded up and out of the way before we start taking the Norcold out. In that case, I’ll be writing. Or, we may decide to at least get everything unbolted and get it ready to go out. It depends on how energetic we feel.

Thought For The Day – Who left the bag of idiots open?

6 Responses to “Not Fun At All”