) Can you be born an old fart? Maybe so.

Whatever the case, it’s official now. I’m a card carrying codger. Yes, I have reached that milestone we all look forward from the first time we get a paycheck and see how much money Uncle Sam took out. It’s payback time, baby! I got my first Social Security deposit yesterday. It’s not much, because I was self-employed for most of my working life, but I’m sure I can figure out something to do with it.

As low as diesel prices are right now, I might even be able to afford to fill my Winnebago’s tank twice. Of course, we’re not going to need fuel again until we start heading west in late January, and if history holds true, fuel prices should shoot back up the day before we leave. It’s my way of stimulating the economy.

Originally, we had planned to stay in Florida until about the first of February before we began our westward trek, but we stirred the Jello all fulltime RVers set their schedules in and pushed things up a week or so. The VA hospital in Tucson has me scheduled for lab work on Friday, February 27th, and my annual checkup is on Tuesday, March 3rd. The Escapees RV Club Escapade starts on the 8th so we’ll have a few days to decompress from the trip and the medical stuff beforehand.

We plan to spend about a month making the trip. In the past our travel mode was to cross the country from Florida to Arizona in a few days, traveling ten or more hours a day, making quick overnight stops, and doing it all again the next morning. But like I said, I’m an old fart now, and we’re slowing down.

And though the most direct route is to get on Interstate 10 and take it all the way to Tucson, a distance of 1975 miles, what fun would that be? Instead, we’ll stop in Tuscaloosa, Alabama to see my son Travis and his pretty wife Geli. From there we may go to Livingston, Texas for a couple of days. My buddies Greg White and Ron Speidel say I can’t have a boat, but Charles Yust has a nice 22-foot Mako sitting in his carport that I want to drool over. Who knows? If I win the lottery someday I may get a boat no matter what Greg and Ron say. Or at least one of those fancy skipper’s hats.

Then we might stop in the Rockport/Aransas Pass area for a few days. It’s one of our favorite places in the Lone Star State. Out next stop will be my least favorite place in Texas – Mission. But it’s been too long since we’ve seen our dear friends Ron and Brenda Speidel, and my buddy Jim Lewis recently moved there from our old hometown in Arizona. Our final stop in Texas will be the Escapees Lone Star Corral in Hondo to see two other dear friends, Mike and Elaine Loscher. They worked endlessly to help make our Gypsy Journal rallies a success and we’re way overdue for a visit.

Following this route will add almost 700 miles to the trip. But why have wheels under your house if you can’t make them roll now and then?

Have you entered our latest Free Drawing yet? This week’s prize is an audiobook of Crazy Days in Big Lake, the third book in my Big Lake mystery series. Here’s a five star review the book just received from Sue Blumenfeld, “I really tried hard to pay attention to the details so I wouldn’t be surprised in the end. Once again, Nick Russell had me fooled with a surprise ending. This series is very easy to read and even easier to get addicted to.” To enter, all you have to do is click on the Free Drawing link or the tab at the top of this page and enter your name in the comments section at the bottom of that page (not this one). Only one entry per person per drawing please, and you must enter with your real name. To prevent spam or multiple entries, the names of cartoon or movie characters are not allowed. The winner will be drawn Sunday evening. 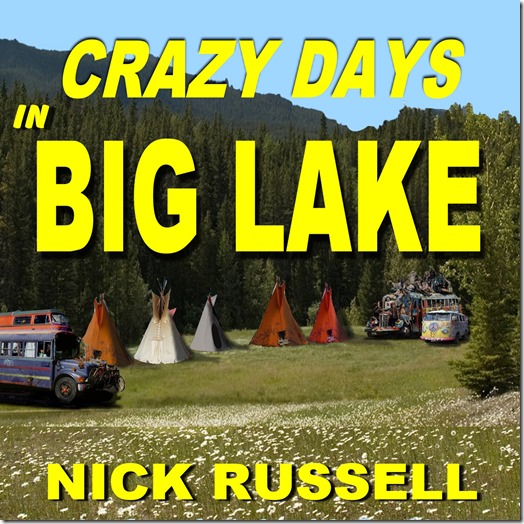 Another good read is Chris Ward’s Tube Riders science fiction series, and for a limited time Chris is offering the Trilogy Boxed Set on sale for just 99¢. That’s right, three e-books for under a buck. How can you beat a deal like that? You can’t, so order it today!

Thought For The Day – There is no greater treasure than a good friend!