No, not Christmas shopping. Except for my two granddaughters, I don’t do that. But it’s time to go computer shopping. After three years of constant battles I’ve had it with this piece of crap iMac.

I reported in yesterday’s blog that the computer, which has been back to Apple more times than I can remember, has been freezing again, and deleted a story I had worked on most of the day. Yesterday both the wireless track pad and keyboard went crazy.

The track pad acted like a mouse will do when you click and hold a button and scroll across a page, highlighting everything in its path. And when I stopped moving it everything in its path opened. So if I tried to click on an icon to open a Word document, it opened every document the curser passed over to get to that icon. If I tried to open a program it would open three or four or five other programs at the same time. I dug my wireless mouse out of a drawer, thinking the track pad had gone bad, and got the same result with it.

The keyboard decided to play along. Either it would not work at all, or else I’d type a word or two and suddenly they would become highlighted and then disappear. Or I might type a word and get something else entirely. For example, I typed “Fredericksburg” and instead got “Fpemwpleckqprm.” And yes, I put fresh batteries in everything.

I did some research online and asked for advice on Facebook and tried a lot of things, including turning the computer off, unplugging the power cord and letting it sit for an hour, deleting all of the wireless devices under the Bluetooth connection and then reloading them, and nothing worked. Finally, after about five hours of frustration I just gave up and switched to my old Asus laptop.

I give up, Apple wins. And please don’t tell me how great your Mac is, or to call Apple and demand a new computer. Terry’s iMac is fine, too. Mine is junk and has been from the start. They have already told me they will not replace it because they know they can fix it, even though they have failed to do so over and over. Life is too short for this nonsense. I just need to save up enough money to buy a another Windows-base computer and all of the software programs I need to be able to work.

Okay, long winded rant over, what else is new? Terry isn’t completely over her cold yet, but she says she feels almost human again. I sure hope so, I hate seeing her feeling so terrible.

Some of you may remember that a while back I mentioned how much I missed having a hammock. But since RV parks often frown on you tying things to their trees, I couldn’t figure out how to use one on the road. Then yesterday I saw this on an online RV forum. Apparently you can use it for two chairs or a hammock. I’d be tempted to get one, but I’m afraid if I did, I’d be outside taking a nice nap and Miss Terry would decide it was a good time to go to the grocery store. And you can bet she’d take the freeway too, not the slower paced two lane road! 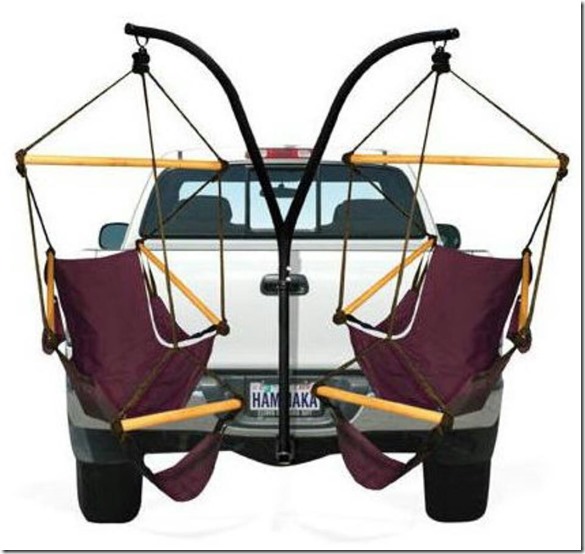 And finally, with Thanksgiving coming I went to my first turkey shoot yesterday. I really liked it, but it scared the hell out of a bunch of shoppers in the frozen food section of Publix. I’ve been asked not to shop there anymore. In fact, they were quite insistent about it.

Thought For The Day – If stress burned calories, I’d be a supermodel.

13 Responses to “Time To Go Shopping”