Nick's Blog » Back To The Island

Some RVers like to play golf, some enjoy pickleball, and others are never happier than when they’re lounging around a campground swimming pool. For Terry and me, give us a back road to drive and no eighteen wheelers crawling up our rear bumper and we’re as happy as clams. (Are clams really all that happy? How do we know? Have you ever asked a clam?)

So yesterday we drove back out to the Merritt Island National Wildlife Refuge and spent another afternoon driving along the back roads looking for wildlife. And there sure are a lot of critters there to see!

On our way in we stopped at the ranger station and showed him Terry’s old fart pass for free admission, and chatted with the ranger that was on duty. He suggested that we cruise Bio Lab Road, the same six mile long dirt road that we took the day before. But since it was much earlier in the afternoon, we could take our time and really creep along. That’s the best way to spot animals from a vehicle.

And creep along we did. It took us over two hours to cover those six miles! We just crawled along, watching the shoreline of the small ponds and creeks, and stopping here and there to check out something that caught our eye.

There are so many birds there that before long you stop noticing the egrets and ibis stalking the shallows for dinner. 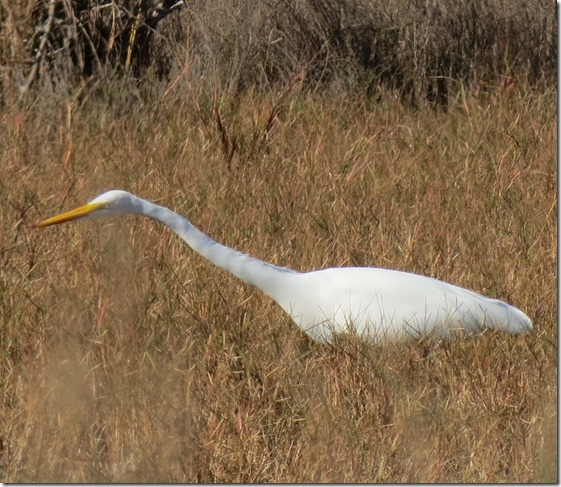 Even the herons are so commonplace that you start to take them for granted. Not that we didn’t stop to take pictures of a lot of them. 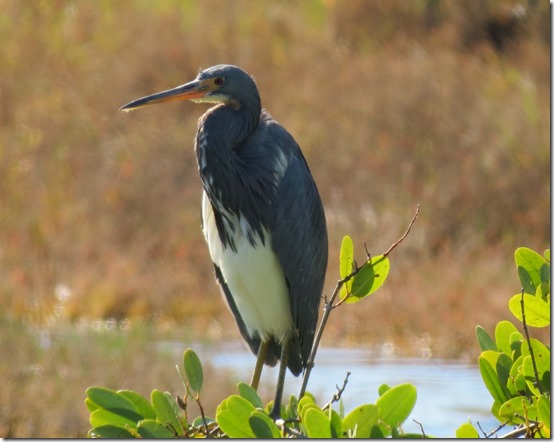 This is an anhinga, also known as the water-turkey for its broad tail, and the snake-bird because it swims with just its long head and neck sticking out of the water. 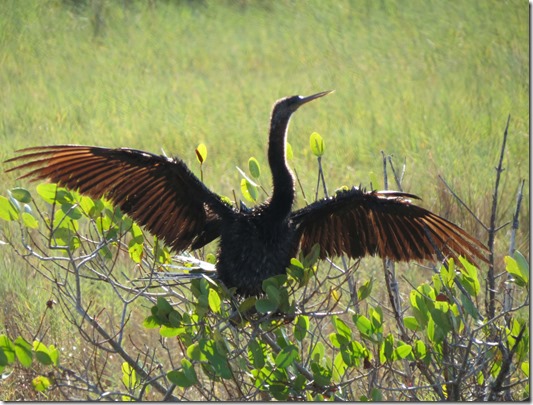 There are also a lot of vultures. Every time I see one of these ugly birds I think they’re just waiting for me to keel over. 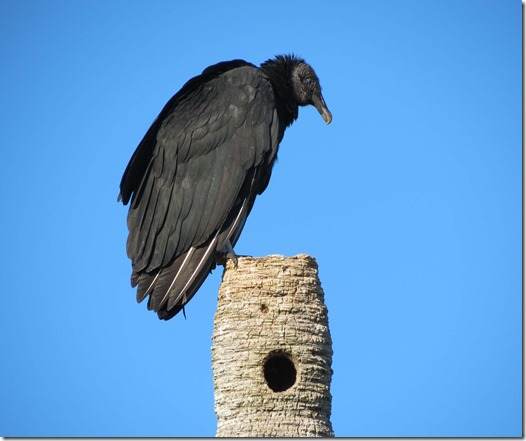 But birds aren’t the only things that live in the wildlife refuge. Terry got a nice picture of a monarch butterfly. 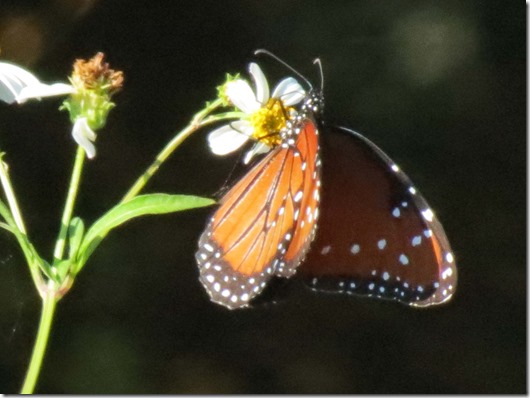 And alligators, of course. There are lots and lots of gators. We didn’t see any for the first mile or two and I was a little disappointed. But Terry assured me that once we found one it would prime the pump and we’d start seeing more of them. And sure enough, not half a mile down the road she spotted our first alligator of the day! 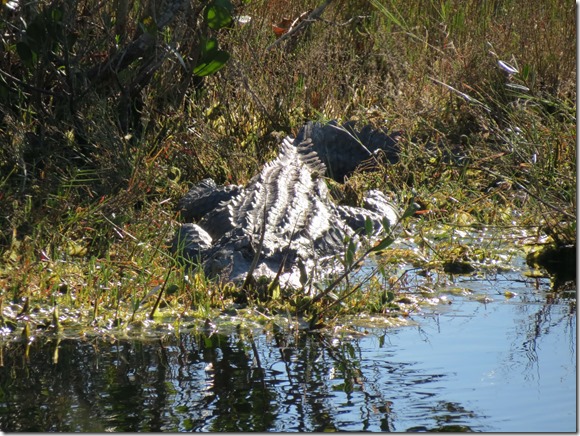 And just a few yards away, another one. 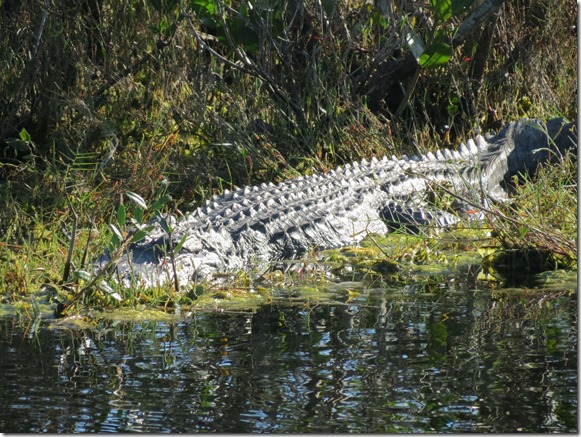 And another and another. Like I said, lots of gators. They ignored us, but I was still happy there was some water and the doors of our Ford Explorer between us. In my life I’ve seen a lot of bear in the wild, and a few mountain lion, but there is something about a predator like an alligator that sends a delicious chill up my spine. 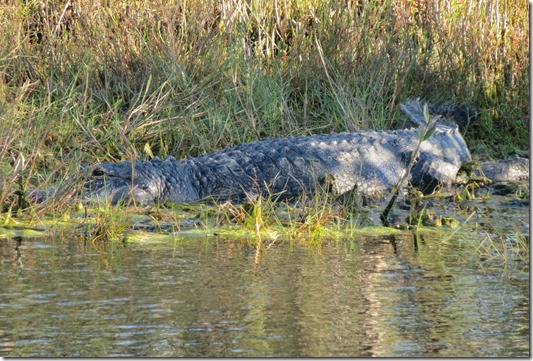 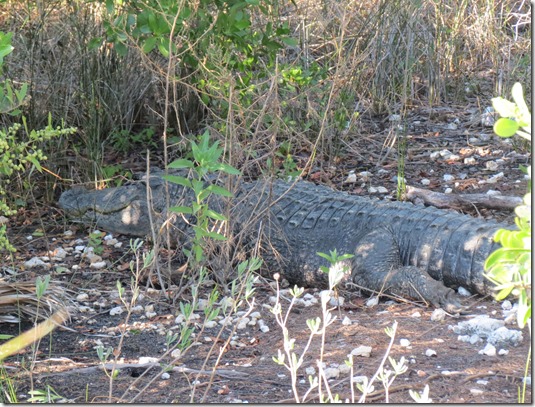 There are also all kinds of fish. We saw some big ones jumping in Mosquito Lagoon. I need to get out there in my Sea Eagle kayak with a fishing rod one of these days. 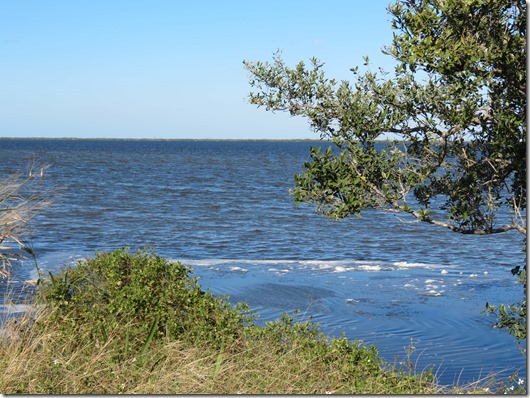 As we came around one curve in the road we spotted a couple fishing one of the ponds and the woman’s rod was bent over almost double. She was cranking on the reel handle for all she was worth, so we stopped to watch the battle. It was quite a fight, but finally she managed to get it close enough to shore for her husband to slip a net under her catch; an impressive black drum. I told them to hurry up and catch another one so we could go to their house for dinner! 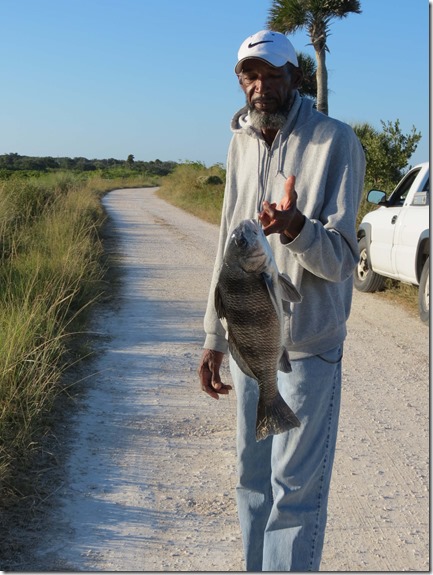 After our slow trip down Bio Lab Road we drove to the manatee viewing area on Haulover Canal. A lot of manatee hang out here in the winter and spring, and we’ve seen several there in the past. But they were not cooperating yesterday, so we didn’t stay long. It was late in the day and we were getting hungry. 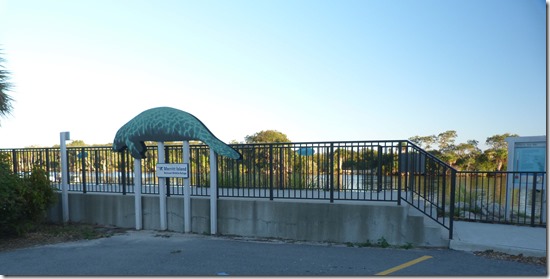 Maybe if I had a boat I could have caught dinner. Hint, hint. 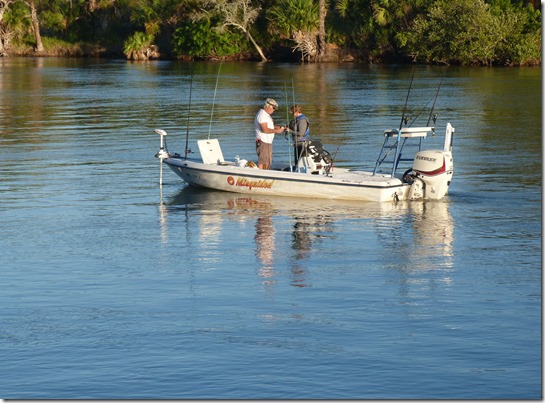 On our way back into Titusville we made a pit stop at the Parrish Park boat launch on the east side of the bridge and I struck up a conversation with a fellow who was fishing. He wasn’t doing as well as the folks out on Bio Lab Road, but he did land this skate while we were there. Most anglers consider them trash fish and throw them back, but according to the Florida Sportsman website, they are quite delicious. 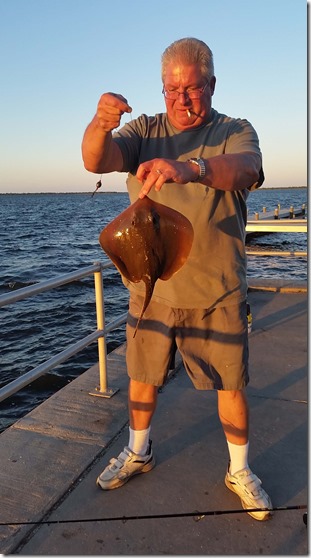 We’re supposed to have a cold front moving in and bringing a lot of rain with it, so I think we’ll stay home today and take it easy. We enjoy playing tourist and exploring, but we have plenty to keep us occupied here.

Don’t forget to enter this week’s Free Drawing for an audiobook of Big Lake Lynching, Book 2 in my Big Lake mystery series. To enter, all you have to do is click on the Free Drawing link or the tab at the top of this page and enter your name in the comments section at the bottom of that page (not this one). Only one entry per person per drawing please, and you must enter with your real name. To prevent spam or multiple entries, the names of cartoon or movie characters are not allowed. The winner will be drawn Sunday evening. 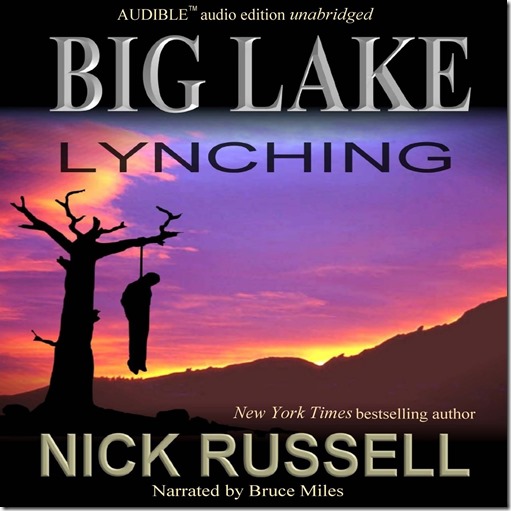 4 Responses to “Back To The Island”