Terry and I spent yesterday on the go, covering a lot of territory and getting a lot done. It was a fun day.

We started out meeting longtime Gypsy Journal readers Ron and Verdis Knight for lunch at the Island Café, located in the Duke of York Motel on the waterfront in Yorktown. They have lived in this area for years and shared a lot of information on places to go and things to see. We had such a good time that two hours slipped by in what seemed like minutes and the restaurant was closing. Thanks for making time for us, Ron and Verdis. We really enjoyed it! 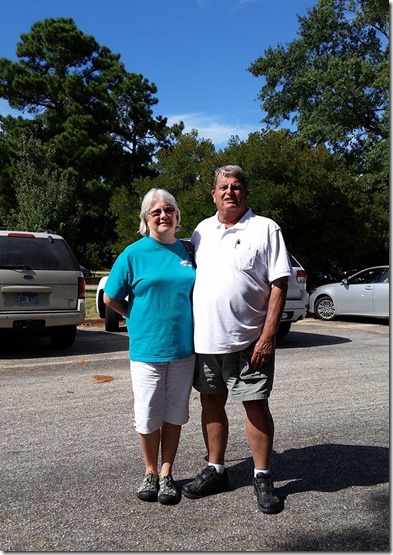 When we left the restaurant we made a quick stop at the Yorktown Battlefield Visitor Center so Terry could pick up her National Parks Senior Pass. For a onetime fee of $10, this lifetime pass is a heck of a deal and will save citizens age 62 and over a lot of money on entrance fees at National Parks, Historic Sites and lots of other places.

Ron and Verdis had recommended that we check out The Colonies RV and Travel Park adjacent to historic Fort Monroe National Monument, and since several of our readers had recommended the same thing, we decided to take a look. Fort Monroe was established soon after the War of 1812 and we definitely need to go back sometime and explore the old fort and the Casement Museum. 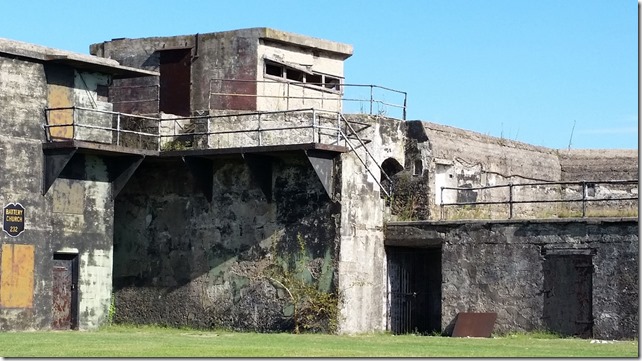 The campground is small but it looked like the kind of place I’d enjoy hanging out at for a while. Guests have access to 500 feet of private oceanfront beach only a two-minute walk across the park, and there was plenty of open space for kite flying.

Depending on which route we take when we leave this area heading further south in the motorhome, we have to cross the James River where it empties into the Chesapeake Bay via one of three bridges, and we all know about me and bridges. So from Fort Monroe we drove across on the Hampton Roads Bridge–Tunnel and it wasn’t bad at all. The bridge is on Interstate 64 and is two lanes each direction, and best of all, it wasn’t very high. Tunnels don’t bother me at all so it was a piece of cake.

We drove on into Virginia Beach, an upscale beach town, and spent a couple of hours poking around there. This impressive 34-feet tall bronze sculpture of King Neptune greeted us. 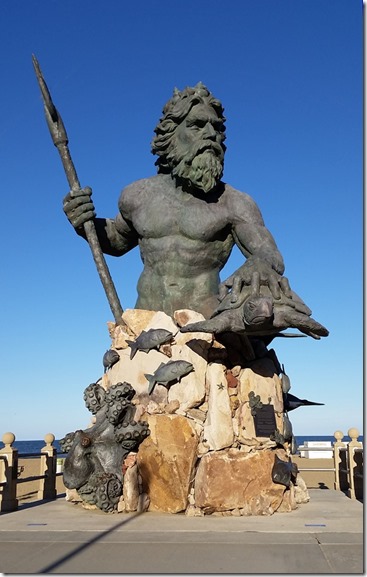 The Neptune Festival is going to be this coming weekend, with a sand castle contest, entertainment, and big crowds. But yesterday there were not very many people around.

While we were admiring the deep blue water (okay, I may have been admiring a couple of young ladies in skimpy bathing suits, too), Terry spotted a cell phone somebody had lost. I flipped it open and there was a missed call message showing, so I hit re-dial and when a woman answered I explained that we had just found the phone. It was the owner on the other end of the line and she had been calling the number, hoping somebody would hear it and pick it up. We hung around for about 20 minutes until she could drive back and meet us. She was thrilled to get her phone back and wanted to pay me for our trouble, but that’s bad karma. I told her to pay it forward to somebody else sometime down the road.

Since it was getting late in the day, Terry drove home. We took a slightly longer route back home, across the Monitor–Merrimac Memorial Bridge–Tunnel on Interstate 664. Again, low and wide. Another piece of cake. I don’t mind going under the water in a tunnel so ships can pass over me, I just don’t like being on high bridges so they can pass under me.

I’m not sure what’s on the agenda for today. We may stay home and hang out, or we may do some more exploring. There’s so much to see and do around here that we can’t possibly get to everything in the two weeks we have left, but that’s okay because we will have plenty of reasons to come back again!

Thought For the Day – We cannot solve our problems with the same thinking we used when we created them. – Albert Einstein