It took longer than usual but my new book, Big Lake Scandal

is finally available for purchase on Amazon. Usually it takes about twelve hours for a book to go live once I upload it, but it was closer to 24 hours this time around. Surprisingly, the Nook version of the book was available much sooner. Usually it happens the other way around.

I am constantly amazed at Miss Terry’s talents though I shouldn’t be since I see the things she can accomplish on a daily basis. Here is her latest creation, a beautiful purple iris blend with green highlights. The photo doesn’t do it justice as it has almost an iridescent appearance. This was her most complicated pattern to date, with the warp having 578 individual threads, all hand wound and threaded onto the heddles individually. 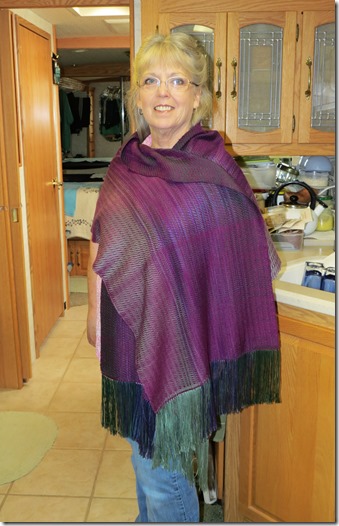 With the last of the new edition mailed out to our subscribers and the new book uploaded, yesterday we drove into Gettysburg and spent the afternoon driving the auto tour route through the epic Civil War battlefield. 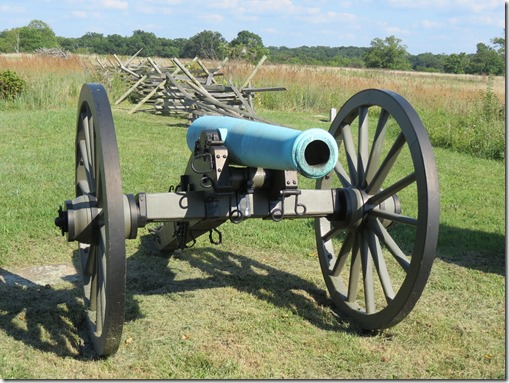 Everywhere you look in Gettysburg there are monuments to the Union and Confederate units that fought there. 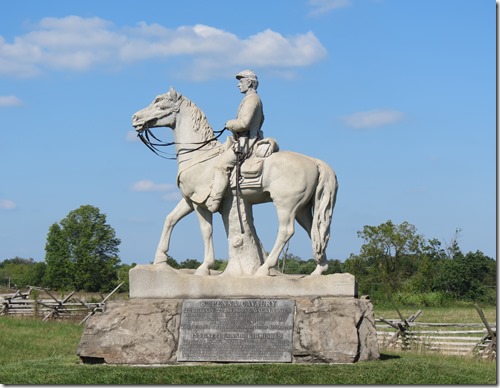 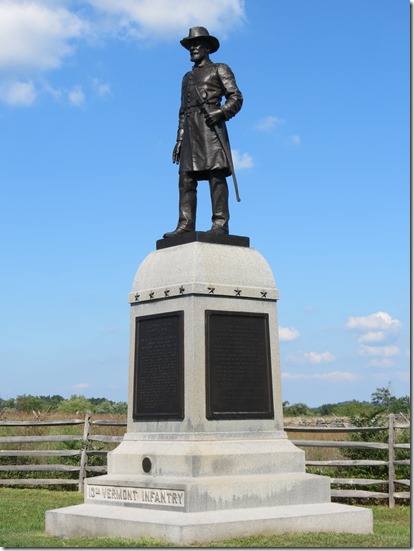 The battle didn’t take place in one spot, but rather was a series of desperate, bloody clashes in places with pastoral names like Culp’s Hill, the Peach Orchard, the Wheatfield, McMillan Woods, and Little Round Top. The tour route covers several miles as it winds its way past them. 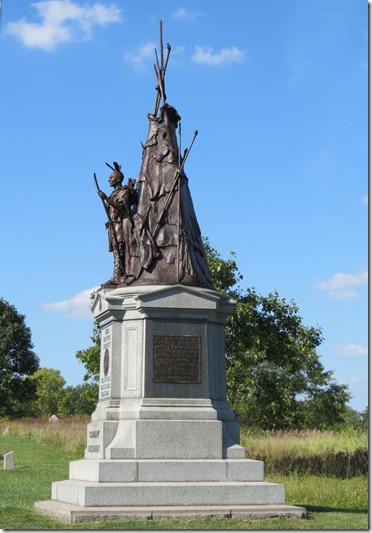 If you are feeling energetic, at Culp’s Hill you can climb this observation tower for a bird’s eye view of the battlefield. 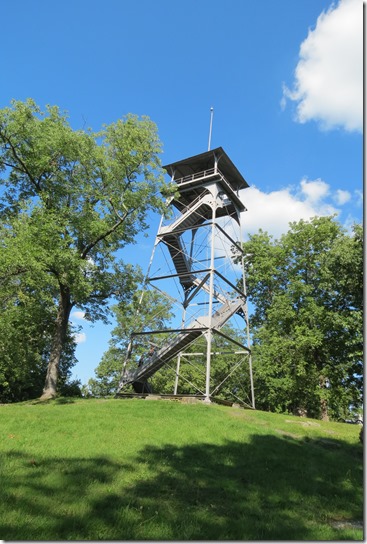 The action was not just in the outlying areas either; the streets of the small town became part of the battle and many homes still standing today saw some of the bloodiest fighting and still bear the scars of war. Some still have cannon balls or rifle slugs embedded in their walls. Almost every building in town, be they private homes, stores, or shops was used as a refuge for terrified citizens, as sniper’s nests, or pressed into service as makeshift hospitals. Plaques and signs on many buildings tell of their role in the battle. 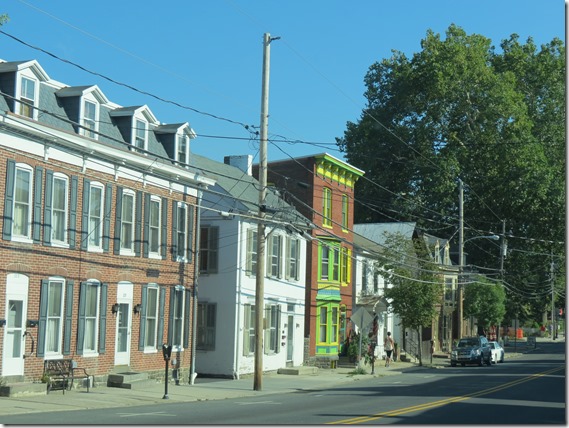 During the time of the battle, Professor Martin Stoever and his family lived on the upper floors of this building and the ground level was occupied by J.L. Schick’s general store. Shortly after the fighting began, 20 wounded Union soldiers were brought to the home and the scene became gruesome as limbs were amputated and horrific wounds were treated with no medical equipment or training. 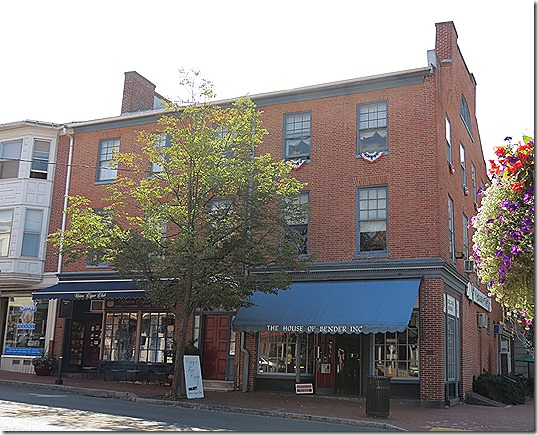 We’ll have a feature on Gettysburg in an upcoming issue of the Gypsy Journal.

Longtime subscribers Tim and Stephanie Brewer live just outside of Gettysburg and after we toured the battlefield we met them for dinner at a great place called the Garryowen Irish Pub. This is a popular place with the locals and I can see why. The food and service were both outstanding.

And so was the company, of course. Tim and Stephanie are a couple of years away from fulltiming and we talked a lot about the RV lifestyle and the advantages of different RV makes and models. Hopefully we were able to give them some food for thought.

After dinner the four of us walked a couple of blocks up the street to another great restaurant called simply The Pub and Restaurant, where Tim and Stephanie said they serve amazing desserts. They shared this massive slice of carrot cake and still had a lot to take home. Terry and I shared a piece of cheesecake that was absolutely delicious. 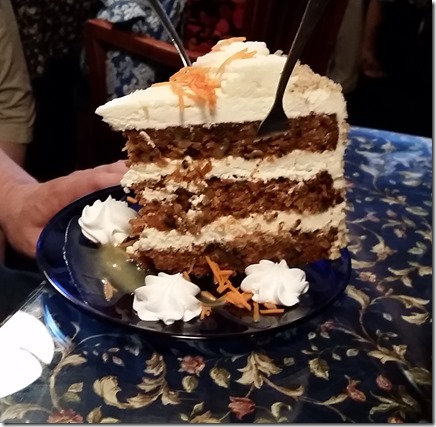 After dessert we went outside and visited some more before we finally said our goodbyes and headed back home. We look forward to getting together with Tim and Stephanie again in our travels.

It’s Wednesday and that means it’s time for a new Free Drawing. This week’s prize is an audiobook of The Package: Book One by my friend Cleve Sylcox. It’s a classic detective noir short story featuring a hardnosed private eye, a shady lawyer, a femme fatale, and a whole lot of trouble. To enter, all you have to do is click on the Free Drawing link or the tab at the top of this page and enter your name in the comments section at the bottom of that page (not this one). Only one entry per person per drawing please, and you must enter with your real name. To prevent spam or multiple entries, the names of cartoon or movie characters are not allowed. The winner will be drawn Sunday evening. 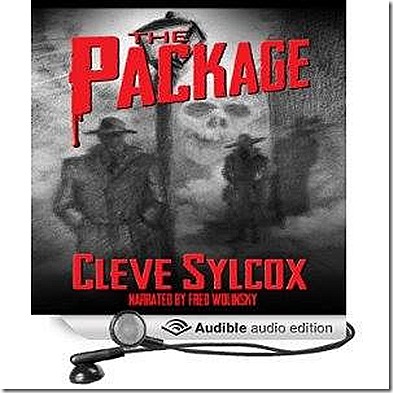 Thought For The Day – Simplicity is the nature of great souls.

7 Responses to “New Friends And A New Shawl”