Nick's Blog » It Can Be Paralyzing

Many times in the past we have shared a chuckle over my fear of bridges and my open admission that I’m a wimp when it comes to crossing high bridges. Especially narrow ones. If it is a four lane bridge and I can get into the inside lane I can handle it, but when we have to cross a two lane bridge I relinquish the steering wheel and have Terry drive, while I try to keep my sniveling to a minimum. And I’m not always successful in controlling the sniveling.

Even though Terry is an excellent driver and I have full confidence in her, at times we have gone out of our way to avoid some bridges. We’ll be doing that when we leave here. The most direct route to Colonial Beach, Virginia is U.S Highway 30 to Interstate 83 in York and then south to the Baltimore area and around the west side to Interstate 97 and on to U.S. Highway 301 south to just above Colonial Beach, where local roads would take us to our campground. Microsoft Streets and Trips

However, that route includes crossing the Potomac River on the very high, very narrow, Governor Harry Nice Bridge. I’ve been across that bridge and believe me, there’s nothing nice about it. 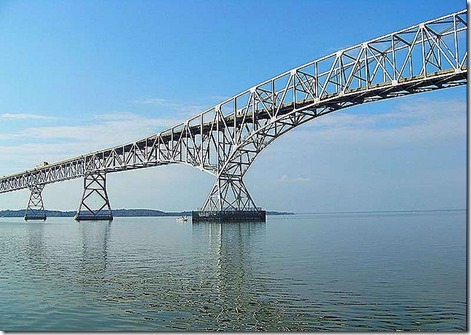 We did that on our last trip through that area and I swore never again. The Astoria-Megler Bridge over the Columbia River scares the hell out of me. The Mackinac Bridge between Michigan’s Upper and Lower Peninsula gives me nightmares. But that bridge absolutely terrified me! It is very narrow, two lanes wide, very high, and the walls on the sides are not high enough. I closed my eyes while Terry drove across it, but peeked a couple of times and almost had a coronary!

This trip I plan to follow U.S. Highway 15 south to Frederick, Maryland, pick up Interstate 270 to the Washington Beltway (Interstate 495) and then south to Fredericksburg, Virginia on I-95 and east on State Route 3 to Colonial Beach. It adds about 25 miles to the trip, but it’s well worth it. Somebody said they hated driving around the Beltway, but I’ve done it before and didn’t find the traffic any worse than going around Baltimore. And there’s no scary bridge to cross!

Though I joke about it, gephyrophobia is a real anxiety disorder and thousands of people suffer with it. I guess I’m fortunate in that, with Terry’s help and understanding, it doesn’t hamper our travels too much.

I had an e-mail from a gentleman recently who saw my post in a thread about this on the Escapees forum who said that he recently attempted to drive over the bridge at Astoria, Oregon and suffered a panic attack so severe that he had to stop and could not continue. He was alone in the motorhome and traffic was piling up behind him while he sat there with his hands frozen on the steering wheel. He said a man from one of the cars stopped behind him came to his window, said he was an off duty cop, and asked if he was okay. By then the motorhome driver said he was shaking so badly that he could hardly talk. After determining that he was not suffering a medical emergency, the policeman offered to drive the RV across the bridge. The owner said that it took all he could to set the brake and let go of the steering wheel to unlock the door to let the good samaritan in, and that when he door opened the door and saw over the side of the bridge, he threw up. Once on the Washington side he was okay, except for being humiliated and traumatized. He said at that point he was ready to sell the motorhome and give up the RV lifestyle. Hopefully he will get past it and find ways to cope that will allow him to continue traveling.

While my second editor is doing her thing with my new book, Big Lake Scandal, yesterday I started the next one in the series, Big Lake Burning, and got a little over 2,000 words done.

Be sure to enter this week’s Free Drawing Free Drawing for an audiobook of Dog’s Run, my mystery set in a small Ohio town in 1951. If I had to name one of my books as my favorite, it would be this one. To enter, all you have to do is click on the Free Drawings link or the Free Drawings tab at the top of this page and enter your name in the comments section at the bottom of that page (not this one). Only one entry per person per drawing please, and you must enter with your real name. To prevent spam or multiple entries, the names of cartoon or movie characters are not allowed. The winner will be drawn Sunday evening. 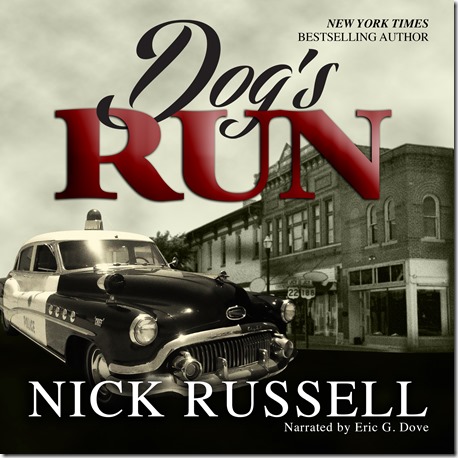 18 Responses to “It Can Be Paralyzing”