Note: I have had several requests for a reprint of this article, which first ran in the Gypsy Journal in 2007. Since we were on the go playing tourist in Michigan and didn’t get in until very late last, I decided to post it for today’s blog.

A while back I was taken to task by a reader for using the term “gal” in the Gypsy Journal. In reply, I wrote that I refuse to be politically correct. I’ve tried it, but facts are facts. I’m a dinosaur.

However, in my constant search for self-improvement, I have given the matter a lot of thought, and decided that yes, I can make some changes to reflect the kinder, gentler Nick some of you seem to expect. I don’t think I’ll become a flaming liberal anytime soon, but maybe by adopting a more enlightened vocabulary I can move a step or two out of the Stone Age.

Henceforth, I will strive to use the following terms to replace the crude ones I was known for in the past.

When an RV salesman is trying to push an overpriced unit on you and swearing that it will carry three times the rated payload, he is not “lying through his teeth.” He is just being “ambivalently truthful.” That line he is feeding you is not pure “bull s**t.” He is, in fact, disseminating “bovine scatology.”

The lady in the rig parked next to me is not a "dumb blonde." She is a "light-haired detour off the information superhighway."

I will no longer refer to my mother-in-law as a “nag.” She is, in fact, “verbally repetitive.”

My weird cousin is not an "airhead" anymore. He is now "reality impaired."

The nice mountain folks of Kentucky, Tennessee, and West Virginia will no longer be referred to as "hillbillies." From this day on, I shall call them “Appalachian-Americans.”

When my fellow RVers sit around the campfire and extend Happy Hour into the wee hours of the morning, they do not get "drunk" or "tipsy." They get "chemically inconvenienced."

The folks in those big fancy Prevosts factory bus conversions who look down on the rest of us because we didn’t spend in excess of $500,000 on our RVs are really not “snobs.” They just have a physical malady known as “nasal elevation” and also suffer from a psychological problem described in textbooks as “financially inflated egos.”

That noisy little dog in the campsite next to us that never shuts up is not a “yappy little mutt.” He is a “vocally expressive canine of diminutive size.” His owner, who never has the courtesy to make him be quiet so the neighbors can enjoy their camping experience, is not a “rude jerk.” He just suffers from “cranial-rectal inversion.”

That portly fellow in the diesel pusher across the way does not have a "beer gut." He has developed a "liquid grain storage facility." He does not get "falling-down drunk." He becomes "accidentally horizontal."

When I see an old geezer with a gal (excuse me, young woman) half his age, he is not a "cradle robber," he just prefers "generational differential relationships."

The owner of that tire shop that ripped me off when I broke down in Needles, California a few years ago is not a “damned crook” after all. He is actually a businessman who practices “negative marketing.”

Now in return for this effort on my part, I expect some concessions out of Miss Terry and the other people around me to describe my own very few shortcomings and imperfections.

I am not "balding," I am in "follicle regression." Nor am I a "bad dancer." As it turns out, I am simply "overly Caucasian." Regardless of what Miss Terry claims, I do not "get lost all the time." I just enjoy "investigating alternative destinations.”

My occasional “gal” comments aside, I am not a "male chauvinist pig. The truth is, I have "swine empathy."

And last, but certainly not least, when I bend over and my jeans sag a bit, what you are seeing is not "butt crack." This is best described as "rear cleavage."

Be sure to enter this week’s Free Drawing prize is a personally autographed copy of Miss Terry’s Kitchen by my beautiful and talented wife. Anyone who has ever read the Gypsy Journal knows about Terry’s reputation as a fantastic cook, and if you have ever sampled any of her goodies, you know that reputation is well deserved. All you have to do is click on the Free Drawing link and enter your name in the comments section at the bottom of that page (not this one). Only one entry per person per drawing please, and you must enter with your real name. To prevent spam or multiple entries, the names of cartoon or movie characters are not allowed. The winner will be drawn Sunday evening. 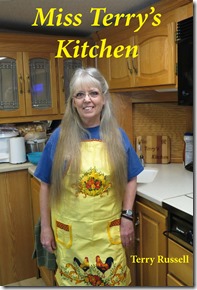 Thought For The Day – Sex education class in high school should be listening to a recording of a baby crying nonstop for five hours while watching the same cartoon of Spongebob Squarepants on an endless loop.