After a couple of unexpected delays, Terry’s new Splendide washer/dryer combo was delivered yesterday afternoon. She is officially a happy camper! And just in time too! Another day and I would have been reduced to going commando! Trust me, nobody wanted to see that happen.

After getting the old unit out, we weren’t too sure how we were going to get the new one up the stairs and inside our motorhome but it was a piece of cake. Greg White was standing by to help, but two strapping young men from RV Parts Nation delivered it and carried it inside the Winnebago and back to the bedroom. The fact that the new one weighs considerably less than the original helped a lot, too.

Once it was in the bedroom Greg and Terry hooked everything back up, and even though I offered to help they told me to go outside and play. It was for the best, I would only have gotten underfoot anyway. Before too long it was hooked up and churning happily away. The new Splendide has more bells and whistles than the original one did and there will be a learning curve to figure out how to get the most out of it, but Terry is looking forward to mastering it. 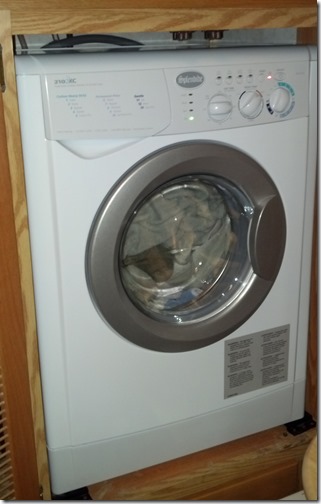 About the time Terry was starting the first load of laundry, Jim and Chris Guld from Geeks on Tour showed up. They had been over in the Quad Cites area on the Iowa-Illinois border presenting some of their computer workshops and came back to Elkhart Campground to pick up their mail and catch their breath before going to the fairgrounds in Goshen for the combined FMCA/Fleetwood rally.

Anytime RVers get together, food is an important part of our agenda and this was no exception. Jim and Chris rode with us to Mancino’s Pizza where we met Greg and Jan for dinner. Nobody makes pizza better than Terry does, but we’re both hooked on Mancino’s breadsticks. As always, the food was good but the company was better.

I’m not sure what’s on the schedule today, but with the backlog of laundry we have, I suspect Terry will be giving her new washer/dryer a workout.

Now that we have replaced our washer/dryer, our next goal is to replace our Norcold refrigerator with a residential model. We had a Maytag residential refrigerator in our MCI bus conversion and really liked it. They do a much better job than any RV refrigerator.

Plus, even though we have had all of the recall fixes done and have one of Mac McCoy’s refrigerator fire suppression units installed, we don’t trust the Norcold. There have been far too many RVs burned to the ground from refrigerator fires for us to be comfortable with it. 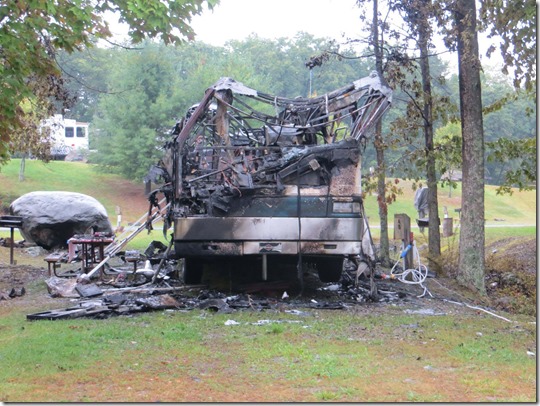 Are you looking for some good reading material? My friend John Daulton’s Rift in the Races, the second book in his Galactic Mage series, follows the continuing story of powerful Prosperion sorcerer Altin Meade and feisty Earth-fleet officer Orli Pewter in the fight against the mysterious alien Hostiles.

What kind of challenges would a modern-day computer tech encounter as he fixes technology in a world of elves, trolls, dwarves, goblins, and talking horses? Check out Geek of Legend: The Elvish Screwdriver, which is free today only on Amazon.

Mystery fans will enjoy Lee Hanson’s Mystral Murder. It’s the third book in her Julie O’Hara Mystery series, but it’s a complete story that many readers actually read first, loved, and went on to the others in the series.

If you enjoy a good paranormal romance comedy, my pal Molly Snow’s BeSwitched is also free on Amazon.

And for a heck of a deal for mystery/thriller fans, check out 9 More Killer Thrillers, with nine full length novels by myself and eight bestselling authors, including Russell Blake, Melissa F. Miller, L.T. Ryan, John L. Betcher, Luke Romyn, Claude Bouchard, Michael Wallace and M.J. Rose. All that and it’s just 99¢. Like I said, a heck of a deal!

Thought For The Day – Maybe it’s not about the happy ending, maybe it’s about the story.