Nick's Blog » Back To The Real World

Congratulations to Linda Strid,this week’s winner of our drawing for an autographed copy of Miss Terry’s Kitchen. We had 345 entries in this week’s contest, which is a new record by a wide margin. Stand by, a new contest starts soon!

Yesterday was a good day for hanging out and being lazy at cousin Berni’s house. It was Miss Terry’s birthday and she said that’s what she wanted to do. Well okay then, I can be lazy with the best of them!

We actually got up earlier than we usually do, and Terry did what she loves to do, she made a big breakfast for everybody. Now I know some of you are saying "What, you didn’t take her out to breakfast for her birthday?" No, we offered, but being the Birthday Girl she got to make the rules. And cooking for a bunch of people who appreciate what she makes is what makes Terry happy. Who am I to argue? 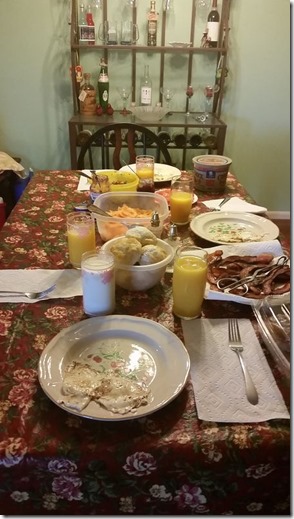 Rocky had to go to work during the afternoon and Berni offered to take us for a ride, but we play tourist for a living. Just hanging out with her at the apartment watching some movies on TV and visiting was a real treat for us.

About 6 p.m. Terry and Bernie grilled cheeseburgers and we had a light dinner. Then it was time to play Mexican Train again, which is a tradition whenever we get together. Not having Rocky there helped the girls to gang up on me. What’s a guy to do? We played three games in the three days we were here, and Berni won all three of them. Flat out cleaned my clock every time. I’d say I was holding back, trying to be a polite guest, but who am I kidding? Even I don’t believe that.

We have had a wonderful time with Rocky and Berni, but it’s time to get back to the real world. We’re going back to Elkhart today and I’ll pretty much be chained to my desk the rest of the week getting the new issue of the Gypsy Journal ready to send to the printer by the end of the week. Thank you for making us feel so welcome, Rocky and Berni. We love you guys.

And before I close, thanks to everyone who e-mailed and left birthday greetings for Terry on the blog and on Facebook. You all made her feel very special.

Thought For The Day – Laughter is the best medicine. Unless you’re diabetic. Then insulin comes pretty high on the list.

3 Responses to “Back To The Real World”