Nick's Blog » They Both Lied

Yesterday was the first day of the Escapees 54th Escapade rally here at the fairgrounds in Goshen, Indiana and it was a busy day. We were up by 7 a.m. and in our vendor booth before 9, ready to do business as the crowds started flocking in.

And flock they did. There were very few moments when we didn’t have people at our booth. Customers buying books and subscriptions to the Gypsy Journal, people picking up samples, old friends stopping by to say hello, and blog readers and subscribers coming to introduce themselves. It’s always nice to put a face with a name on a subscription label.

Here is my beautiful lady in our vendor both, full of smiles and ready to take care of business. 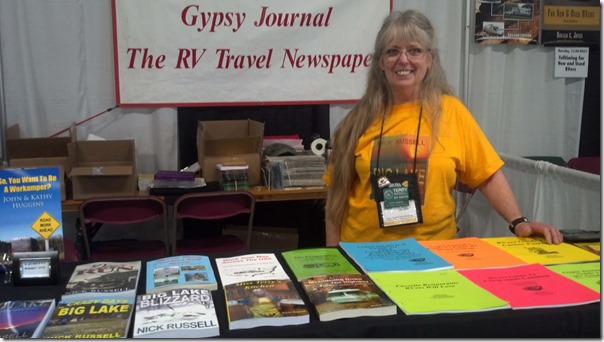 Another pretty lady who is always taking care of business is Janet Tranum from Almost Heaven Microfiber. 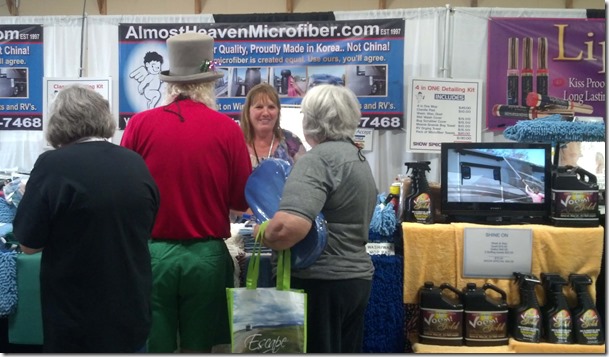 I think this was one of our best “first vending days” ever at a rally. Books sales were excellent. I think Terry is about sold out of her cookbooks, with maybe three or four left. Several people came by and bought all four of my Big Lake books, plus Dog’s Run

. Not to mention our RV books and guides, our CD, and subscriptions, too.

Many of you may be surprised to learn that Terry is very shy, and in spite of her many talents and accomplishments, she never gives herself any credit. I think she is secretly thrilled (and shocked) at the success of Miss Terry’s Kitchen. And I’m delighted, because I get to say, "I told you so!" We’d order more copies, but they wouldn’t get here before the rally ends. 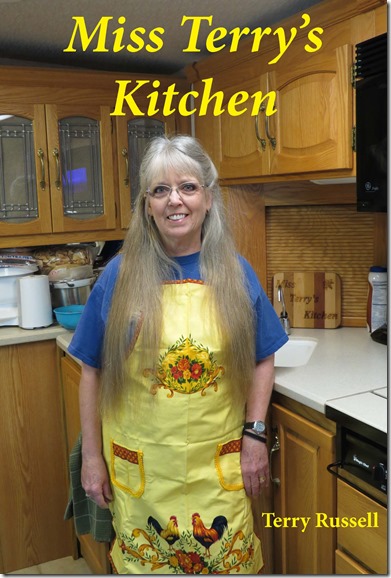 The Market area closed at 2:30 so folks could get to the opening ceremony at 3 p.m., but we had some things that we needed to mail out, so we skipped the ceremony and ice cream social that followed and went to the post office to get that chore done. On our way back to the fairgrounds we stopped at a yarn shop in downtown Goshen called Reverie so Terry could check it out. She said it had some nice things, but nothing she couldn’t live without.

Back at the fairgrounds, we saw longtime reader Jim Gass, who told us about a new Chinese buffet that recently opened in Goshen. Jim said it was good, so we mentioned it to Chris Yust, and she said Janet Trannum had told her the same thing about it. So Terry and I, Charles and Chris, Darryl Lawrence, and his son Jeffrey decided to give it a try. Now, Jim’s a nice guy, and Janet is a very sharp lady, but as it turns out, they both lied. Of the six of us, I think the best comment we could manage about the restaurant was that it was “okay.” And I think that was being generous. We’re not going to break any speed limits going back.

Today I start doing my seminars, so Terry will be working the booth alone from 1:30 to 4. I have two seminars tomorrow, one on Wednesday, and two more on Thursday. If you’re here at the rally, I hope you’ll sit in on a seminar or two, and please stop by our vendor booth to say hello. And if you’re not at Escapade, you’re missing a very good time.

Thought For The Day – If I refuse to take a nap, is that considered resisting a rest?

2 Responses to “They Both Lied”